There’s nothing like a Saturday night out with the girls, to get a spring back in one’s step.

I heard from my friend Misty, this week, that our blog friend Val was coming into town for the weekend.  Val and I have been commenting on each other’s blogs for a couple years now, so I've been looking forward to meeting her for some time.  Judging from her blogged exploits, I knew a good time was to be had.

Misty and Val were planning on seeing a play on Saturday afternoon (Elf), then going on a Fells Point haunted pub-crawl at 7:00.  We decided to meet for dinner and drinks in-between.  Misty suggested meeting at a designer pizza place called Joe Squared, in the nightclub area known as Power Plant Live.  When I looked the place up online, their website had some interesting information, which I immediately shared with Misty.

Hipster: Hey, you’re not wearing skinny jeans!
Bluz: What are skinny jeans?
Hipster: Jeans that are really snug through the waist and legs.
Bluz:  [shoveling pizza into mouth]  I’m workin’ on it…

Misty pointed out that hipsters never acknowledge that they wear hipster stuff; they just wear it.  I figured I’d be OK, because my closet is full of t-shirts with antiquated references.  I’d be fine with anything, as long as I wore it ironically.

I showed up a mere 3 minutes past our meeting time, just as Misty was beginning to text me to meet them somewhere else.  But then the hipster bartender started making promises about a free shot, so they agreed to stay.  Once we dispensed the hugs and settled in at the bar, I realized immediately that Val was all that I expected, from the first words out of her mouth.

Bluz: So how was the play?
Val: Some fuckin’ c*nt almost ruined our day!
Bluz: [Spews beer all over the bar, almost chokes]

Seems that the lady sitting beside them in the theater was unimpressed by all their laughing and applauding (at a comedy) and told them to “Pipe down or I’m calling the manager, because I’m tired of your shit.”

Nice.  That’s the Christmas spirit!  It’s a good thing the lady made tracks out of there after the show, because Val swore she tried to track her down so she could step on the back of her shoe and give her a flat tire.

Anyway, I had a great time and I learned a number of things:

* Val is not only funny, but very quick on her feet with a retort.  The bartender was trying to run some shit with her, but she basically had him roped and tied with her banter.

*  Val is for sale, perhaps even as a timeshare.  A transaction was proposed and accepted, wherein the bartender was to purchase Val for a short period of time, and she would live in his basement.  I’m not sure if there was a pit involved, but I need to recommend this option to Sitcom Kelly.  Cash payment is quicker and easier than all the stalking.

*  Woe be unto he who takes pictures of women from a low angle.  We took a number of pictures among ourselves, which I thought were perfectly lovely.  However I was the only one with that opinion.  Misty tricked me into letting her see my camera (I can’t believe I fell for that) and proceeded to erase all the offending pictures (which was most of them).

That’s funny, because Pinky used to yell at me about the same thing.  Apparently, it’s all about chin camouflage, so the only acceptable angle is from above.  Somewhere, Pinky is probably reading this and proclaiming, “Revenge is mine!”

I still left with at least a couple of useful shots…
I’d show you one of all three of us, but Misty does not appear on camera.  No, not like a vampire, I mean she actually does a good job of maintaining her online anonymity.  But trust me when I say, we looked dazzling!

When Val gave him some shit about how we were all bloggers, about to write some shit about him, he panicked.  Then they revised their statement, saying they were just kidding, and only I was a blogger.  He said, “I can tell, because he still uses a camera.”

Fucker.  I dare anyone to take a picture like these, with a freakin’ cell phone: 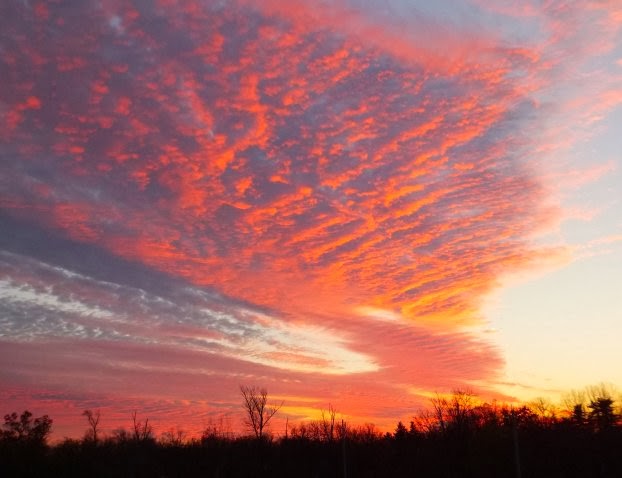 *  Bartenders lose major cool points when they drop the bottle they've been flipping around.  (That’s the shit they were going to write about the bartender.)  But Val was mostly upset because he wouldn't serve her anything that was on fire.

*  It’s a good thing I was only with them for an hour.  I might have sprained my face, from all the laughing.  We’d met at 5:30, and by 6:30 they had to get out to Fells Point for the start of their pub-crawl.  It only took an hour for my cheeks to get sore from the constant laughter.

*  At 52, I am too old to be hip, no matter what I wear, or use to take pictures.  Fortunately, I’m also too old to give a fuck what anyone else thinks about it.  Life is much easier this way.

I love when I get to move a person from my mental “Blog Friend” file to just plain “Friend.”  So I say thank you to Misty and Val, for allowing me to hang out with you for a while.  It totally made my weekend.

And Val, you totally have to come back for HonFest!

Marginally-related note: On the way home, I realized why I'm always so unsettled by the subway station I had to use to get to Power Plant Live.  Tell me that this... 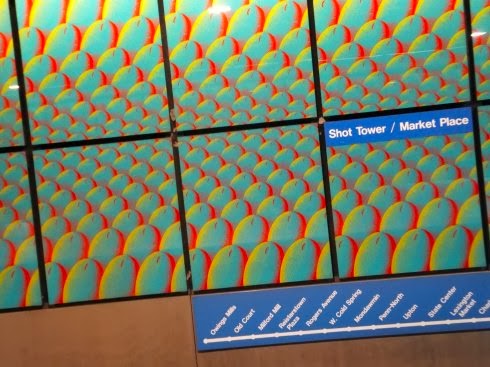 Doesn't remind you of a brightly colored version of this...
Who knows what really dwells in the subway tunnels...
Posted by bluzdude at 10:49 AM

Really, it's best to take Val in small doses at first. You have to work up a tolerance. Like Tequila. And both of us together? Yeah, most men can't handle that combo. Luckily for you, we like you, so we took it easy on you.

And it's ok, Bluz. You can tell them . . . I actually AM a vampire and don't appear in photos. But still, ALWAYS FROM ABOVE.

So how many skinny jeans did you see? Sounds like you were too busy laughing to take notice. :)

I love it when blog friends become real life friends.

And those sunset photos are gorgeous.

I didn't see anyone in skinny jeans, or really anything at all. I paid zero attention to the room. Who would, when hanging out with Misty and Val? There's no need to worry about anyone else.

Thanks for letting me crash your little party for a while. I can't wait to read about your adventures from the rest of the night. I bet Val brought home a pet ghost, from the haunted pub-crawl.

Anyone who uses the "c" word is OK in my book. Having a 24 year old daughter who has schooled me in the use of this word has taught me that it's time for women to take back that word. So glad you had fun and could share your escapades with us.

Funny, that's the one word I just can't use, even in the blog. (Unless I'm HIGHLY motivated, like in a post about Sarah Palin or Ann Coulter.)

Sounds like a blast. Wish I'd been there. And yeah, the chin thing, but also the under eyes. We ladies need to be lit from below. Fabulous sky. Same here on the west coast. Happy Thanksgiving, Tony. Hopefully, one day we'll also be able to exchange "blog friend" for just "friend."

Lit from below? Doesn't that make you look like you're telling ghost stories into a flashlight. No wonder I'd rather shoot landscapes...

Nothing would make me happier than to add you to the RL friend collection.

With Misty and Val for company, how could I not?

You just need some fake, ironic eye wear to fit in there. (i.e. nerd glasses.) But then guys like us don't naturally like to "fit in." Or, as Woody Allen said, "I sued American Apparel because they calculatingly took my name, my likeness and image and used them publicly to promote their business."

I should have bagged the contact lenses and broke out my old teardrop framed eye-glasses. That's as retro as I get... I always hated the thick, dark frames. I'll never forgive Lisa Loeb for unearthing that whole "Librarian Glasses" look, from the dustbin of the 60s,

It was so nice to meet you!!! You know I like you if I drop the C word In general conversation, by the way. I use that word only with my favorites. And the bartender's basement was not delightful at all! It smelled of elderberries and hookers.

I am SOOOOOO coming back for HonFest!!! It's on!

I KNOW, right. Step up to the big leagues!

Ironically, I thought you were a hipster.

Ironic or not, I am only hip in comparison to, say, President Eisenhower.