It’s been a while since I've spent this much time at home, alone.  Friday was my last day until January, so I've just been knocking around here by myself.  It’s weird, but I embrace the positive side, and make do.  I’m adaptable that way. 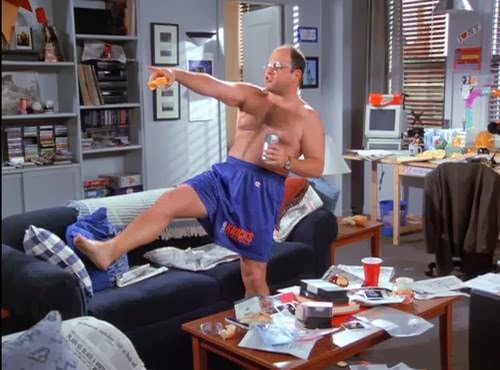 ...only I had a bigger block of cheese.

Had a good time over at the sports bar on Sunday.  Because the Steelers were playing the 4:30 game, and I wanted to make sure I got my favorite spot at the bar, I was there at noon, and because the games ran long, spent nearly 8 hours on that bar stool.  I swear, the things I won’t do to support my team.  I wore my Steelers Santa hat too, which was all lit up (just like me).  Seemed to go over well.  But it was fun… any time the Steelers win and the Ratbirds lose, is a good day by default.

Tomorrow, I’ll head over to my brother’s for presents and Christmas dinner, then on Thursday, we all will go to Pittsburgh.  My brother and his family, my sister and her husband, and my parents are all making the trip to visit with our large, Burgh-based family.  I can’t wait.  This will be the first time in ages we've all been together for the holidays.  I’m sure it will make my Grandpa happy.  (He’ll be 98 in February!)

Meanwhile, I’m keeping myself occupied during “TV rerun season” by watching old True Blood seasons that I missed the first time.  So I can’t possibly find the time to write a brand new post for you.  But again, I’m unearthing something from Christmas of 2009, which you probably never saw.  I figure, if I give you a nice, substantial post today, which ought to hold you until I get back this weekend.

Until then, I hope you have a wonderful Christmas and charge into 2014 with a song in your heart and a smile on your face.  And lacking that, a giant block of cheese.

The Traveling Christmas Show
Christmas was always such a busy time, growing up. When we were real little and still living in Pittsburgh, it was such a flurry of activity having our own Christmas, and then heading off to both grandparents’ place. I know it was all pretty hard on my parents but as kids, we loved it! Three Christmas extravaganzas of cookies, good food, presents and cookies! Lots of cousins to play with! And did I mention the cookies?

My dad’s dad, Grandpa N, always took movies… the old 8mm silent kind and he always used a light… a big, brilliant, blinding light. It was so bright we could barely open our eyes wide enough to see what we were opening. Then when it was over, he’d turn it off and the room would seem positively cave-like and we’d spend the next 10 minutes walking into things until our eyes adjusted. Too bad the camera was off by then… it would have been much more entertaining.

In later years, my aunt had those movies knocked off onto VHS. It was funny then to see essentially the same movie over and over again but with the characters aging 1 year each time. 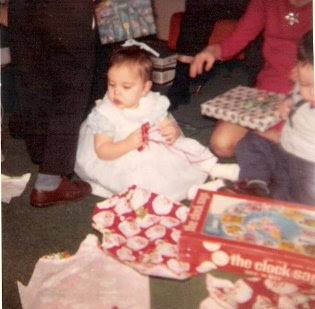 Now it’s dinner time… there’s the table. Look at all the food.

Now it’s the next Christmas… look at the same blinded kids, eww, what are they wearing?

And on it goes… 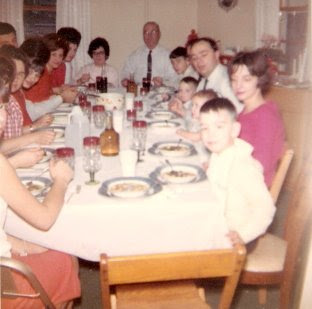 It was agonizing to see myself going through each of the horrid styles of the 1970’s.

The "Urban Cowboy" year with a freakin’ cowboy hat with a wrap-around feather the size of a vulture’s ass!  Who the hell did I think I was, Charlie Daniels?

Nevertheless, it was cool seeing my cousins growing up right before my eyes. In fact, we only got to see the cousins in yearly increments anyway, once we left The Burgh. (I was 6.) As the first-born of 2 first-borns, I was the alpha cousin, and in later years, it was pretty much up to me to maintain order among the chilluns. This is where my high school class ring came in very handy. I learned from my dad just how powerful a good flick of the ring was. In fact, I think I still have an ornate, backwards “D” on the top of my skull from his Duquesne ring.

Once we moved away from Pittsburgh, my siblings and I got to enjoy a new Christmas perk… Christmas a week early! The weekend before Christmas, we’d have our own celebration and do the stockings, presents and the whole sha-bang. Then we’d travel to Pittsburgh for the actual holiday and make the Grandparental rounds.

The trip was always hell, especially when we were coming from Chicago… 3 bored, punchy little kids, fighting their seat belts and each other, trying to listen to a scratchy AM radio. Mom still smoked back then so we had those regular noxious gas intervals. She’d crack the window, thinking the smoke would go out. Unfortunately, it was mostly the freezing air rushing in.

But it was all worth it when we got to my grandparents’ place for the best meal of the year… The Christmas Eve Feast of the 7 Fishes. It’s an Italian thing. There would be fried smelts and shrimp, fish fillets, heaps of pasta, plus chicken, wedding soup, and Lord knows how much other savory stuff. I’d eat until I couldn't move any more.

Later in the evening, after the dishes were cleared and the olives, celery and cookies were put out, Grandma would break out the bingo game. They used to play Bingo in the old days to kill time before midnight mass, but by this time they weren't going to the late mass any more. But Grandma would save up change all year for us to use for Bingo and we’d have the big family Bingo showdown.

I always liked it because it was something that the kids and grownups played together. Although every so often that led to some not-very-kid-friendly terminology getting thrown out after a long, tension-filled game:

God Rest Ye Merry Merchantmen
Years later when I was all grown up and managing a record store in Cleveland, the holidays were just brutal. From the beginning of November through the middle of January, to paraphrase Al Bundy, it was like “one long month… Helluary.”

As manager, I’d be working pretty regular 12-16 hour days. The place would be mobbed… just accounting for all the money was practically a full-time job. (I do admit that there’s nothing like the sight of more than $13,000 in cash sitting on your desk). But we would be so busy, I’d go home and collapse in bed and have dreams that I was at work, tending the register and clearing customers. I’d wake up and be like, “Fuuuuck! I can’t even escape with sleep…)

I didn’t have any family in Cleveland. The closest kin I had were, you guessed it, in Pittsburgh. So when we’d finally get permission to close up on Christmas Eve, usually around 5:30 or 6:00, I’d shut’er all down, bolt for the car and bust ass down the turnpike for Pittsburgh.

I’d get to Grandma and Grandpa’s house about 9 or so and Grandma would have soup on the stove and sandwich fixin’s at the ready. Grandpa would appear with an IC Light. After the meal, Grandma would tell me that when she heard I was coming, she went and got some Klondikes for me, which at the time, could only be obtained in Pittsburgh.  They were always my favorite treat as a kid.

I hope she knew how much those Christmas Eves meant to me. It was like an oasis of comfort in a sea of aggravation. To be able to settle into a big easy chair and chat with my grandparents and just… breathe…