I haven’t really cooked anything for quite a while.  Once I met Pinky, she basically took over the cooking duties and I’ve basically been a “re-heater.”  Even since I’ve been single again, I’ve mostly stuck to things for which “Microwave for 90 seconds” has been the first and only step.

See, when I come home from work, the last thing I want to do is cook anything.  (Obviously, by “cook,” I mean “prepare food in a fashion that requires more than one step.)  I just want to come home, feed, browse the computer, maybe pound out a blog post, and then hit the prime time TV lineup or Penguins game.  So I live on Progresso soups, Chef Boyardee lasagna, chicken tenders, microwaveable rice and string cheese.  Or if I had a big lunch, I don’t eat dinner at all.

On the weekends, I’ve made a few simple protein courses, like steaks, chicken, chops or fish.  (You may have heard about my pork chops… they’re to die for.)  That’s when I don’t just go to Wendy’s, or pick up some grocery store carry-out chicken.

But this weekend, I had a hankering to try something a little more complicated… I wanted to make a big bowl of pasta, with sauce that’s not orange.  I haven’t made pasta from scratch* in ages, probably since before Pinky.

*By “scratch,” I certainly don’t mean making the pasta by hand and rolling it out, or assembling the sauce from the ground up, the way my mom does.  I buy the pasta, like most everyone else.  (Bowties are my favorite.)  For sauce, I start with Prego, and then add our family’s “signature” spices, as well as anything else I have on hand to bulk it up.

I was kind of excited, and ready to break in some of my new replacement cooking utensils. 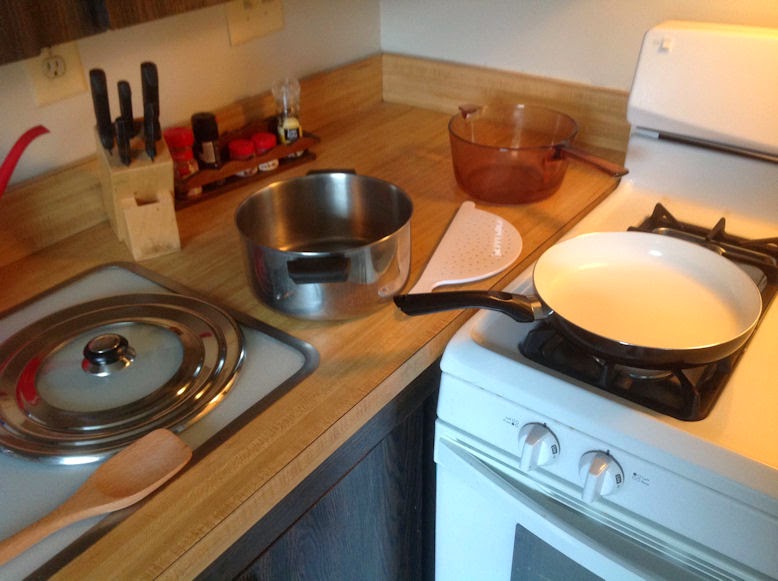 OK, only the sauce pan and lid are new.  And the strainer thing.

I bought a sauce pan that’s “porcelain coated.”  I usually favor the Teflon, non-stick surfaces all the health-conscious people shun.  See, I don’t care if the Teflon particles come off and stick in my guts.  As far as I’m concerned, that should make my intestines “non-stick” and the food will shoot right through.  But if I ever want to cook for someone else, I figured I’d use a more palatable pan.

To me, the fun thing about making pasta is having multiple things going on at once.  I browned the ground beef first, (and I curse myself right now, because I realize I had Italian sausage in the freezer I could have used), and then while I boiled the water for the pasta, started assembling the sauce.

I had a quart of sauce left over from my recently departed girlfriend, and I added about a half a quart of Prego.  From there I added black olives and mushrooms, because, well, I add those to everything.  Mom always says I’d add black olives to a recipe for pie.

I like putting in the spices because it’s a seat-of-your-pants kind of thing.  I never make the same quantity; therefore I can’t predict the proper amount of each spice.  I just shake some in there until I think it tastes right.  I suppose I could “go to the cards,” and consult the recipes Mom wrote for me when I first moved out on my own.  But then there might be math involved and I don’t have the patience to Google “lowest common denominator.”

It’s funny though… every time I’ve split up with a girl, I’ve always requested to take (or be left with) only the spices needed for my sauce.

The sauce had a nice chance to simmer while the water was boiling, and then the pasta cooked.  I don’t like to let the sauce simmer too long, or it starts to disappear (into the air, not into me.  Although if I had some fresh Italian bread on hand, I’d be telling a different story.) 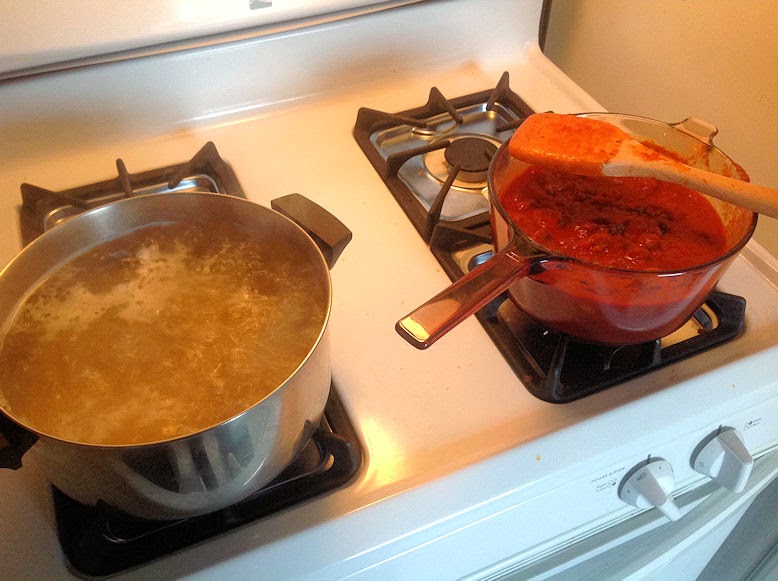 I also had a chance to begin the cleanup.  I hate having a huge pile of greasy pots and pans to wash at the end of the meal, so I always try to wash things out once I’m done with them.  It keeps the kitchen area neater, that way. 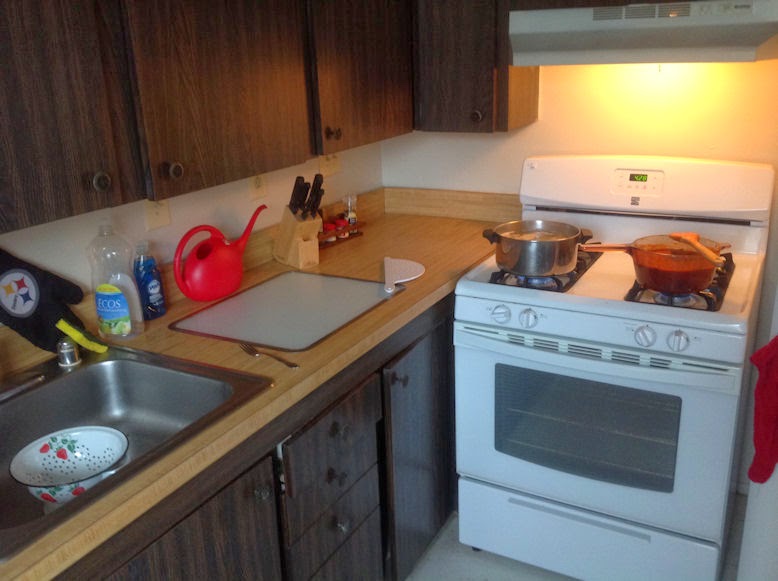 Since I’m “cooking for one,” I didn’t see the need to keep the pasta and sauce separately, so when it was done, the pasta went right into the sauce. 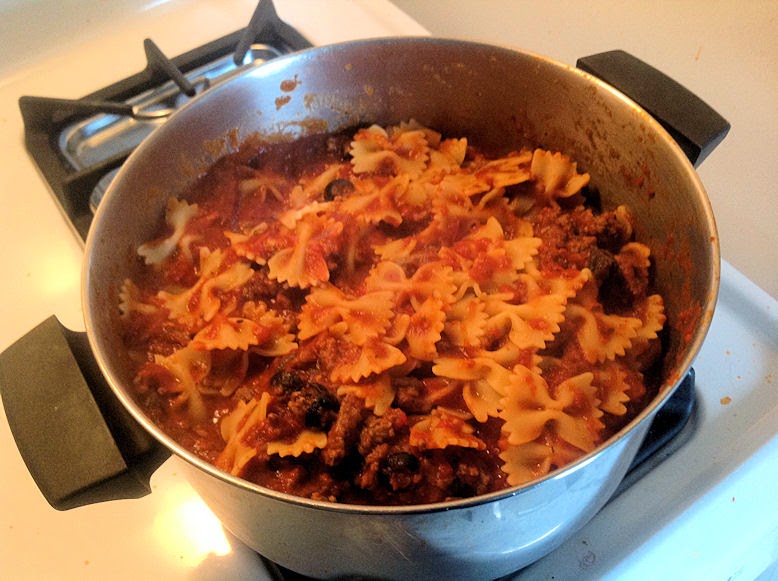 I’m not going to spell out how hard I hit that pasta Sunday night, so I’ll spare you the pictures of me with sauce in my beard and a bowties stuck to my head.

Somehow, I should have leftovers to last most of the week.

Mangia!
Posted by bluzdude at 6:22 PM