The Most Improbable Love Story Ever

There she was, chatting me up on Facebook again.

After we made contact in 2011, we’d only kept in touch sporadically.  That’s when I wrote what I came to refer to as “The Whatsername Trilogy.”  She seemed to be trying to get her life in order, by getting a divorce from her husband and moving back to her home town.

The thing that struck me was how she felt that “now” was her time.  She’d spent a lifetime caring for her children, but now two of them were spun off into their own lives, and her youngest daughter (13) was living with her father and his family.  Now, she said, it was time to live for herself.  She wanted to find a good man and start enjoying life.  She thought I might fit the bill.

I was intrigued, but wary.  Was I ready to jump straight into another relationship, this time, with someone I’d been with before and saw it end so badly?  (And repeatedly?)

We chatted over Facebook, and then sent each other a lot of emails, which soon gave way to phone conversations.  It sounded like we had a lot in common.  She liked all kinds of music, liked sports… even hockey!  She told me how over the years, she learned how to treat a man, and she’d be the best I’d ever been with.  She’d be good for me.

Everything sounded good in theory.  But in practice, she was there, and I was here, 6 hours away.  I explained that I had no intention of giving up my job, (which was definitely the best I’ve ever had).  She said there was no reason she couldn’t come out to Baltimore and find work here.  I didn’t doubt that… she is a highly capable individual with a ton of marketable skill.

That was in sync with what I was looking for.  I want a partner; someone to grab an oar and help me paddle along and navigate life’s currents.  It would be nice not to have to carry the entire financial load.  With two people earning, we can save for retirement and still be able to do some nice things.

The acid test was going to be in getting together.  I mean, we hadn’t set eyes on each other in about 27 years.  So she came out for a visit, to see if we might be able to make something work.

It did.  You could have cut the chemistry with a knife.  It was like there was an electric current running through the room.  All systems were “go.”

Still, I had to wonder about her leaving her family behind.  Aside from her youngest daughter, her son, (who I knew back when we first dated) had his own family, with one son and another baby on the way.  (She also has a daughter who is in the Navy, stationed on the west coast.)

There seemed to be a lot there for her, but she assured me that it was her time now.  The kids were basically spun off and it was time to live for herself.

The way I figure it, I’m no spring chicken any more.  There’s no sense in drawing out a prolonged inter-state courtship, which really won’t help.  Conducting a series of weekend dates won’t show you anything real, because everyone is on their best behavior.  You don’t know what you’re getting into until you throw yourselves together and see how things go on a daily basis.  So with that, we agreed for her to move in with me and see how things went.

During one of her visits, we went to work making room for her things.  We threw out a lot of my stuff.  I wasn’t crazy about the idea, but you can’t argue with geometry.  I live in a 2-bedroom apartment, and there is a finite amount of room.  We had to conduct a fair amount of “negotiation” in order to come into agreement about what should go where, although we wouldn’t truly know where things would fit until we tried them. 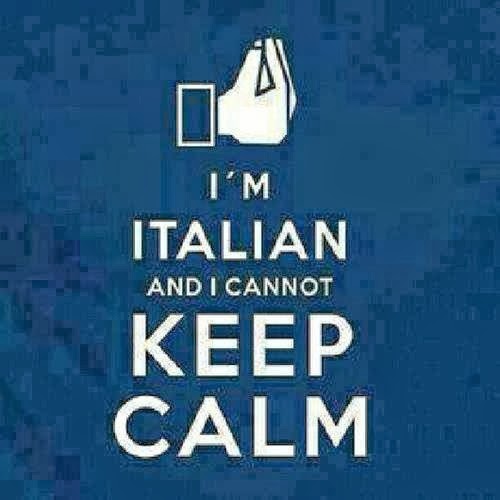 The furniture was the tough part.  I admit that my furniture is a bit long in the tooth, but it’s in good condition, and more importantly, it fits me.  I did not want to part with it.


Her stuff was much newer, and more expensive.  It wouldn’t seem right to me to make her get rid of it, probably at a considerable loss.  We scoped out storage facilities, but man, the prices have really gone up since I last used one.  Not wanting to commit to a $100 a month bill for the foreseeable future, our only choice was to find a way to cram everything in.

I don’t know where I got the idea that she didn’t have much stuff, but boy, was I ever wrong.  She pulled in with a 16’ moving truck, and every square inch of that thing was packed.  Most of it was in plastic storage bins, so luckily it was easily stackable.

It was January, so naturally, it snowed on Moving Day, making it just that much more miserable.  She pulled in on a Friday night, and we started unloading about noon on Saturday afternoon.  We got the last box off the truck around 5:00, and I don’t think I’ve ever been that beat.  We were going to stop for lunch around 3:00, but I knew that if I stopped to rest, I’d never get back up again, so we pushed through.

The biggest problem was getting things into the back bedroom, where she was going to set up her office/crafting area.  We needed to get her desk, bookcases, a wing-back chair, and her sofa in there.  The problem was the closet had a “bump-out,” which was about 3 feet in front of the door, so we had to negotiate a hard left turn just to get into the room.

We squeezed the chair in by removing the legs.  (The screws had been thoroughly stripped, so I couldn’t use my power screwdriver, or any screwdriver.  I had to use pliers.  That took forever!)  We got the desk in only by scraping the paint off the corner of the door jamb.  And the sofa… well, we tried turning it every which way, but we could not get it in the door.  That meant we had to go to Plan B.

I have a 7-piece sectional sofa set, set up like an “L,” with one short side.  We had to remove the corner piece and end piece, and slide her couch in to make a much larger “L.”  It worked, but it looked like the Frankenstein Monster of couches. 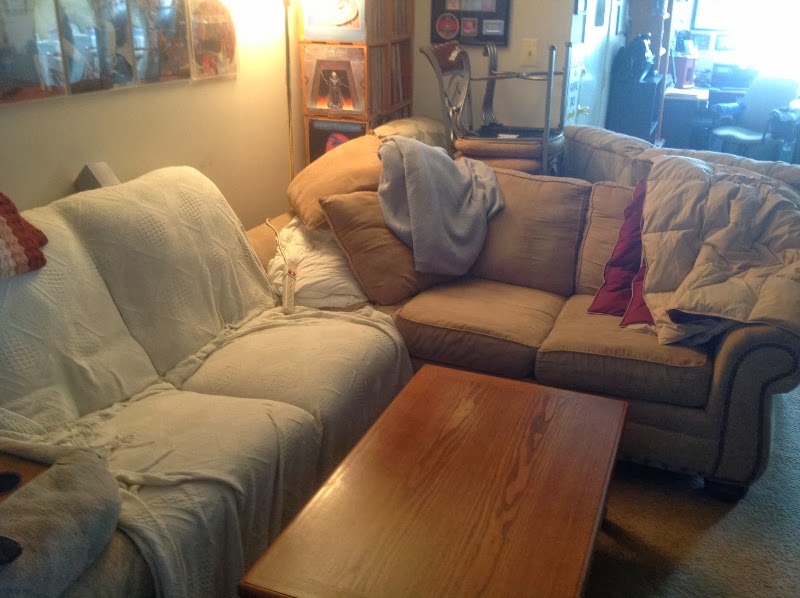 We then tried to stow my sectional pieces in the back bedroom, but they took up way too much room.  We ended up putting them behind the couch in the living room, an arrangement about which I was none too pleased.  But our options were limited. 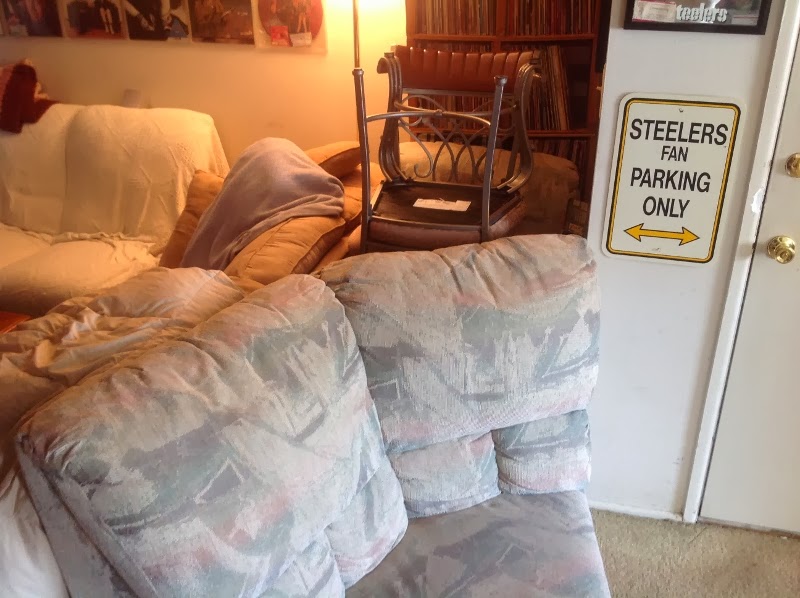 My corner piece makes a place for a weary visitor to sit.  The other piece is behind the corner, under the loose chairs.  (Don’t ask.)

You should have seen the place after the unloading.  It was a nightmare.  I like routine and consistency.  I don’t do well living among chaos.

This was very embodiment of chaos. 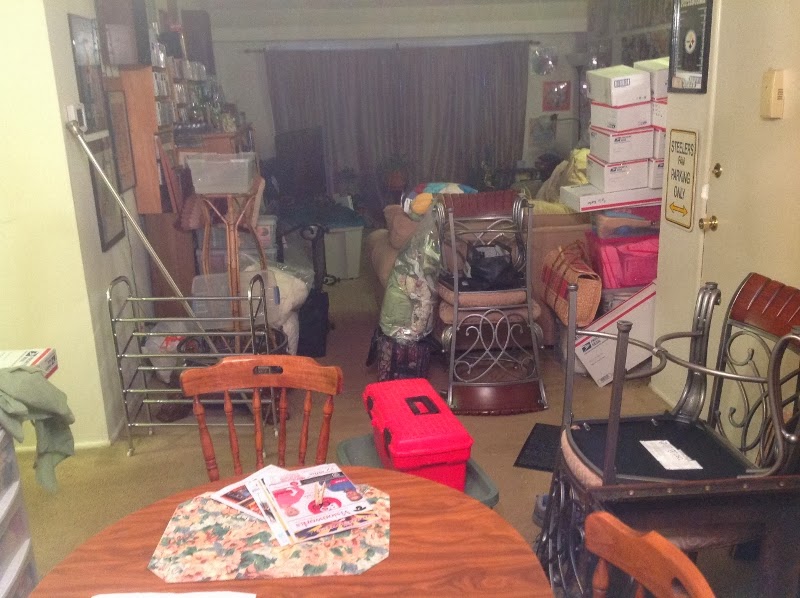 From the dining room, to the living room. 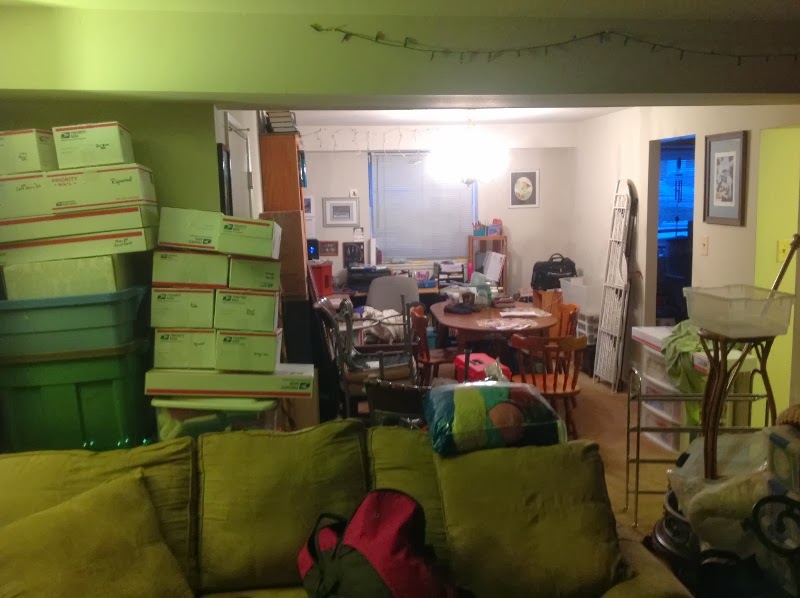 From the living room back to the dining room. 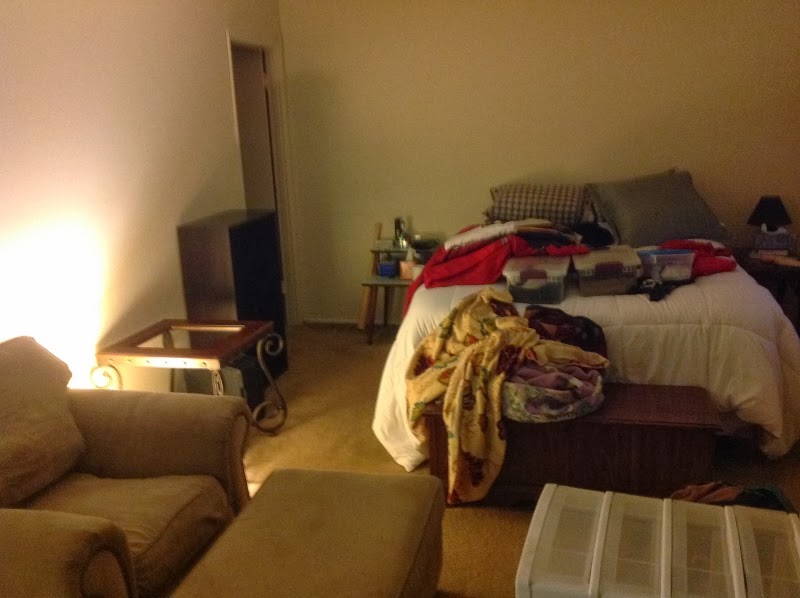 The bedroom wasn’t too bad.  But only the bed and the end table beside it, were mine.  (My other stuff, a wardrobe and secretary desk, is out of frame, to the right.) 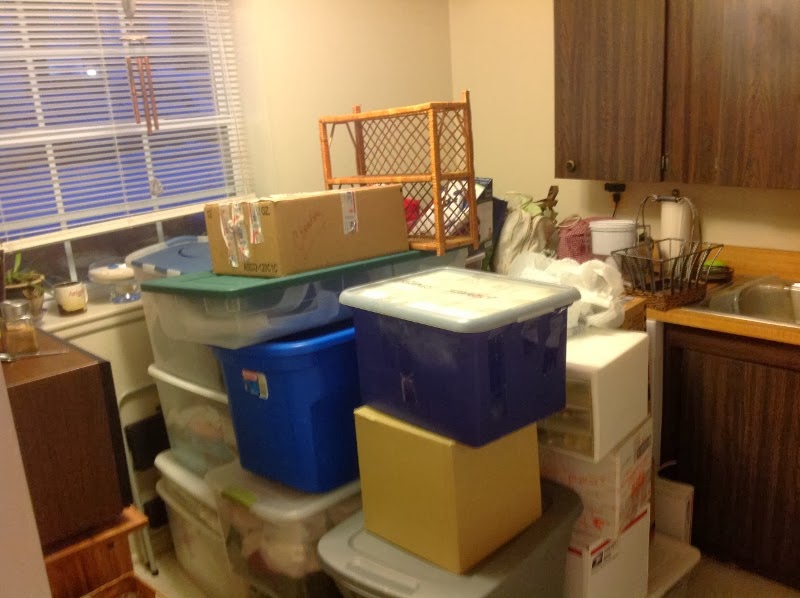 The kitchen was a nightmare.  Luckily, that’s the stuff she put away first. 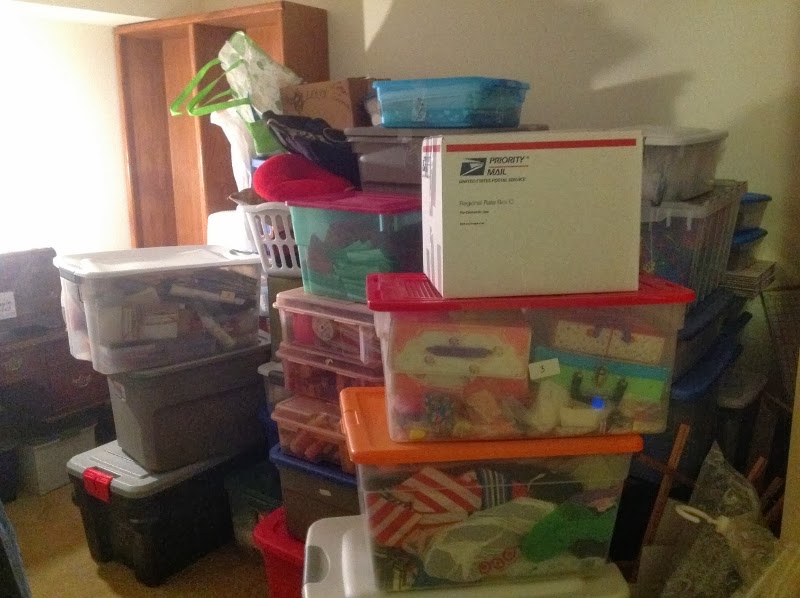 The back bedroom.  That’s where most everything else went.  All of the rest of the room, which I couldn’t get in one shot, looks just like this.

So as you can see, we had our work cut out for us.  But I was excited to take this step.  I couldn’t wait until we got the chaos behind us, and were able to go on with a life together, step by step, in sync.

I kept coming back to one thought… “How improbable is this whole story?”  I mean, if you’ve read the “The Whatsername Trilogy,”  you know our history.  How could a story like this be even remotely possible?  It makes no sense.  But here we are anyway.

I suspect that I am the only one of your loyal readers that does not know what is going on in your real life because I cannot believe I was the only commenter in the last blog or this one.

I can only conclude that you're the only one that loves me any more. I thought that was a pretty big bombshell in the last post. Thank you for hanging around.

I did not read the last post (I guess I should), but this was a pretty big bombshell. I did read the whatshername post way back when. I am intrigued...

The previous post set up this one, as did the last 5, in fact. Cuz I totally plan this shit out!

Sometime the improbable love stories work out the best. Everything happens for a reason.

Wow, this is not what I was expecting. Definitely curious to see what happens in the next installment. And while I just barely read the last bombshell (been busy lately, so blog reading is slow going) I have no idea how this is going to play out.

...So? What the hell happens? Happily ever after or crash and burn in a blaze of glory?

It’s those “reasons” that worry me.

Well, thanks for reading this one…

To answer your question, it’s definitely one of those two…

I AM LIVING FOR THESE TWO POSTS.

Now I know how people felt when I got dumped.

Oh, you are SO getting ahead of yourself!