Greetings from Gulf Breeze Florida. Just flew in yesterday, to spend a couple days with my parents.  It's supposed to be a vacation, but I've already been put to work helping Dad put in a new printer cartridge. Seven seconds later, my time was my own again.

The flights were uneventful but for two things, both of which I captured in tweets.

@DarwinfishBluz: Attn people of the airport. Get your faces out of your fucking phones and watch where you're walking. Thank you.

People walk through airports like drunken zombies, because they don't look where they're going. Next time, I'm going to walk up behind each one and give them "flat tires."

@DarwinfishBluz: I am never flying without headphones again.

I always travel with my MP3 player, but didn't this time. Naturally, I sat in front of two women, one was 64, the other was 57.  I know that because THEY NEVER STOPPED TALKING THE ENTIRE FLIGHT.  Yap yap yap yap yap, for an hour and a half.  And the woman across the aisle was transporting a cat in a carrier, under her seat.  Poor kitty let out a scratchy, feeble meow every 5 seconds.  So between the yap yap yap and meow meow meow, it was enough to make me tear my hair out, which I would have done except its so short now, I can't get a handhold.  I should have asked the flight attendant for some glue.

When we were prepping for landing, the pilot came on and said we had to circle for a few minutes, because of a disturbance at the airport.  I said to my seat neighbors, "Oh God, what has my dad done now?"  They just looked at me funny, because they were teenage girls, and they look at all grownups funny when one speaks to them.  But I knew what my dad was capable of. I figured someone tried to tell him he couldn't stand somewhere and he went all AARP on them.

Anyway, I got in OK, and a night of eating and drinking the Good Stuff, ensued.

Big day today... We already had lunch and a walk down on Pensacola Pier. Tonight we go see the Pensacola Blue Wahoos game, (home of the legendary Big Wahoo hot dog... I'll post pictures), then home to watch the DVRed Penguins game. (I'll have to maintain Twitter silence.) 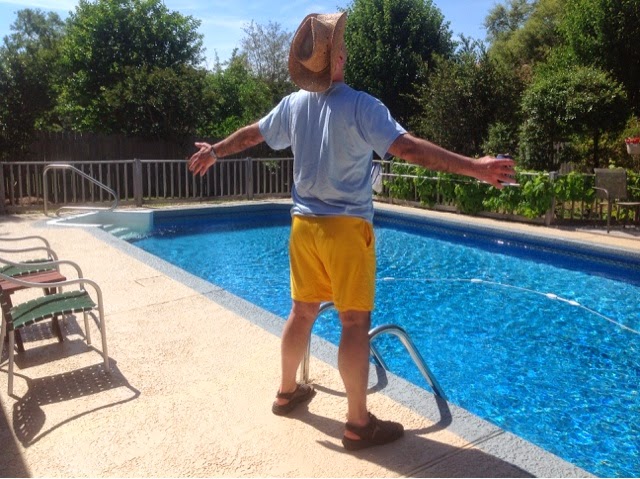