It’s been a pretty draining week, especially this weekend, so let me tell you all about it.  But first, let me answer the question I know is on your mind.  Yes, my buddy John and I did get my special “Watching TV from the Bathroom” mirror set up. 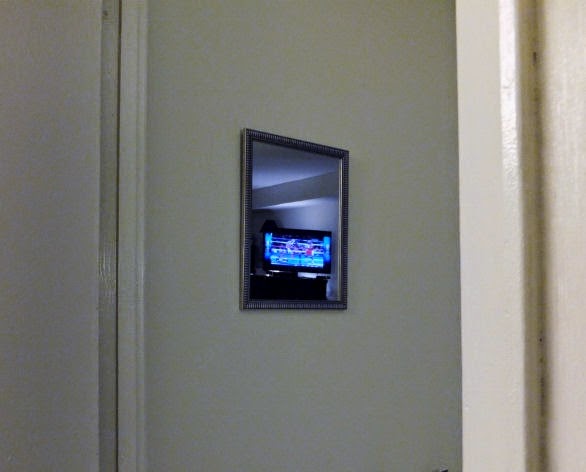 My new view from the can. The mirror by the bathroom on the left, and the TV is on the right, in the foreground.

That’s American ingenuity, right there.  Multi-tasking is in our blood.

But speaking of ingenuity, perhaps one of you can help a brother out.  I took the flannel sheets off my bed yesterday and put new ones on.  Is there anyone who knows how to fold the bottom sheet, and not have it come out looking like a hot mess? 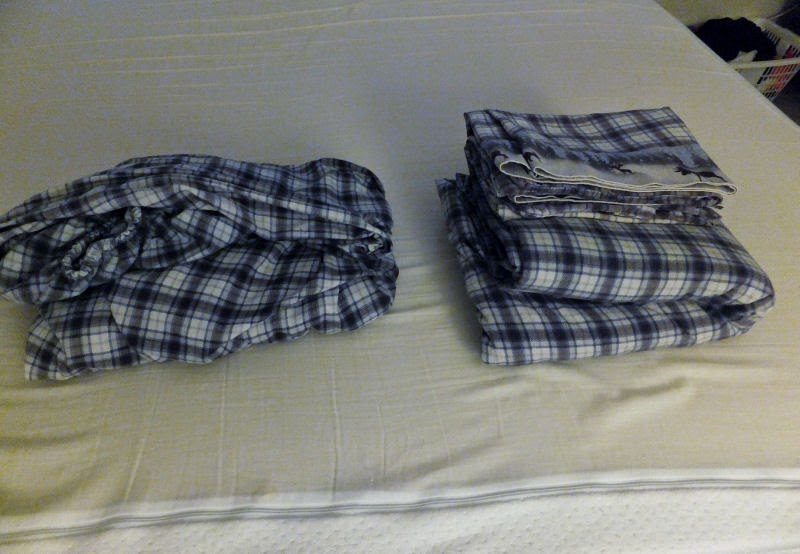 The Orioles/Pirates Series
As I mentioned in the last post, I had tickets to see the Pirates come to town and play the Orioles, on Tuesday and Wednesday nights.  Both games were rained out, so they played a double-header on Thursday.

They made it a single-ticket double-header, so I only needed to use one of my four tickets.  I’ll get to exchange the other three for future games, so I’ll make out pretty well.

The games were scheduled for 4:05 and 7:30, so I felt I should take a half day off to attend.  It was funny, because I walked with two of my office mates, as I was leaving and they were going to lunch.  One of them, an older African-American lady said, “What time is the game, 1:00?”

She looked at me incredulously, over the top of her glasses… “So why you leaving now?”

“Well, I have things to do, and it could be a mess at the box office, with everyone having to exchange their tickets.”

That was mostly true, although my worries proved to be unfounded.  The main reason I left so early is that I was meeting Sitcom Kelly and her Sitcom sister for a bit of day-drinking down at The Bullpen.  We got there just as they were opening. 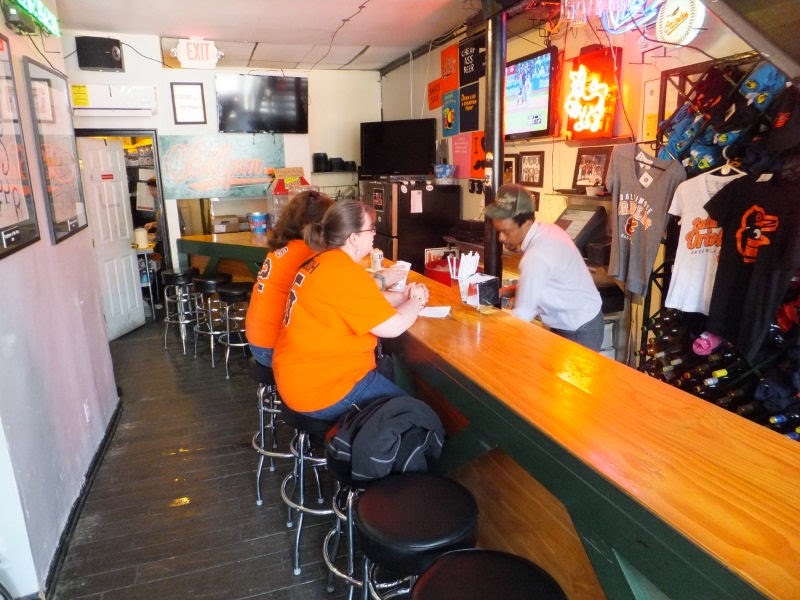 The Sitcoms belly up, while our man Doug readies the bar.  We had the place to ourselves for about a half hour.

As we sat there, deep in discussion about Sitcom Kelly’s life, I came to a conclusion so profound, I had to tweet it immediately.

When your defining characteristics are drinking and cats, you may need re*evaluate your life.
— bluzdude (@DarwinfishBluz) May 1, 2014

Our original seats were under the upper deck, but with a relatively clear forecast (20% chance of rain until 6:00, then 10% afterwards), we decided to try to move up.  We ended up in the 6th row, halfway between 3rd base and the left field wall. 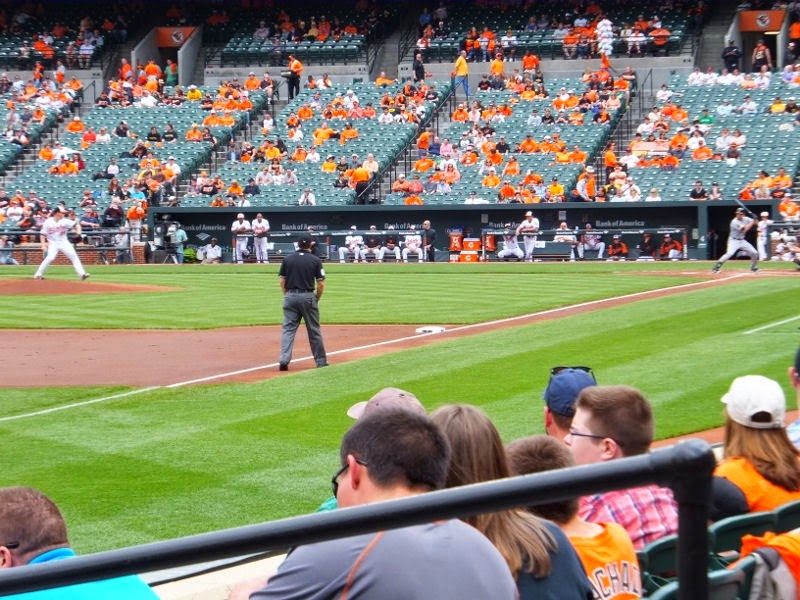 Our view from section 64.

I wore my black Andrew McCutchen jersey, while the Sitcom Sisters went with Orioles t-shirts.  As with all games where Pittsburgh is visiting, there were a significant amount of ‘Burgh fans in attendance.

Because it was a t-shirt give-away day, I kept getting asked what I was going to do with mine.  One guy asked if I was going to wash my car with it.  I just said, “Hell no, I’m wearing it!”

I told everyone that day, “I love the O’s, and I’ll root for them over any team except the one from my home town.” 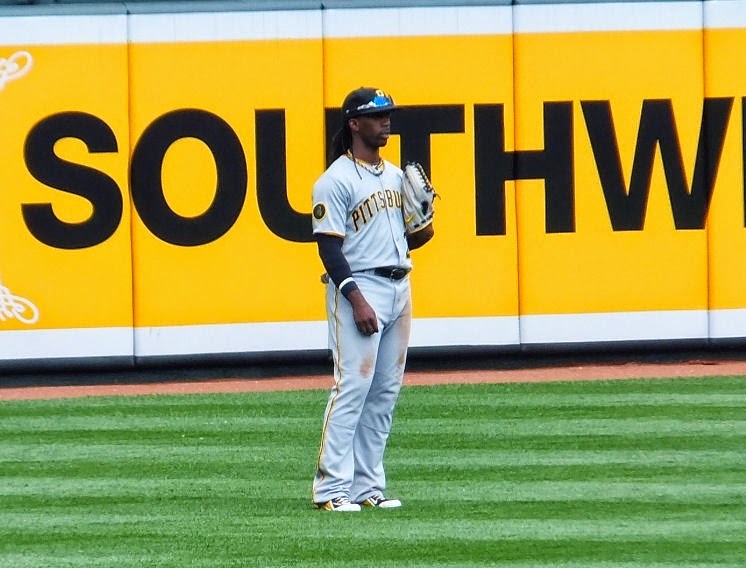 The Pirates really need to work on making some new stars.  Out of all the jerseys on display in the crowd, they were almost all for McCutchen and Roberto Clemente.  Maybe it’s different, back in Pittsburgh.

About midway through the first game, the skies opened and generated a 20-minute rain delay. 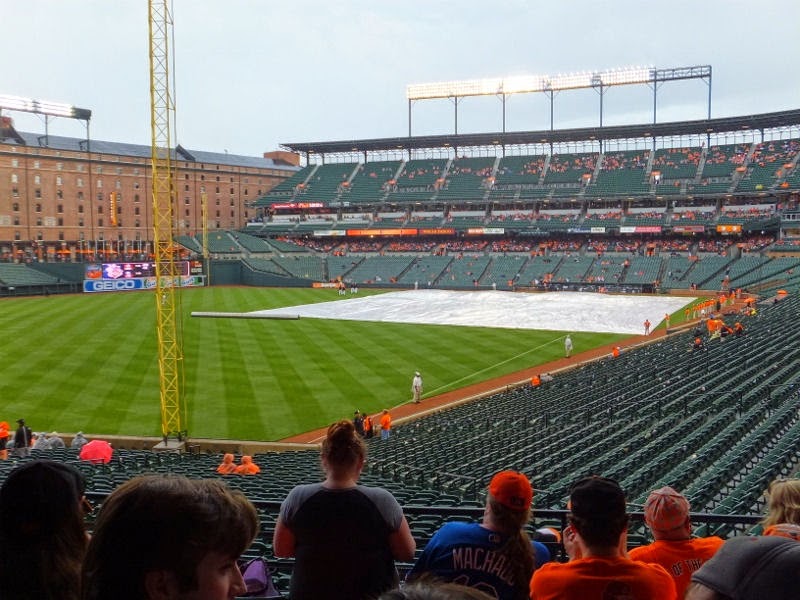 But eventually, the sun returned to shine on the B&O Warehouse, and the game resumed. 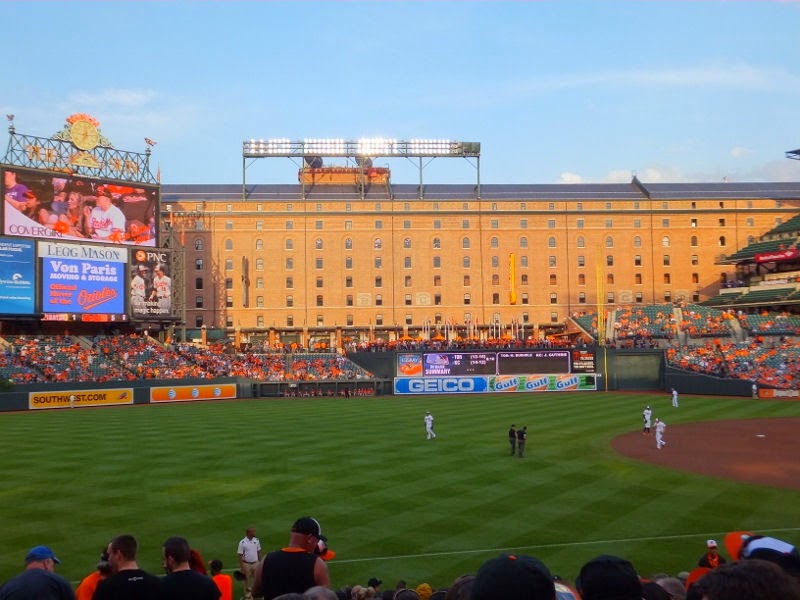 By the end of the first game, I was already starting to feel tired.  I’d only had one beer during the game, so it was probably due to the seven I had beforehand.  It also didn’t help that I woke up at 4:30 that morning, and couldn’t fall back to sleep.

In between games, it started to rain again, hard.  This delayed the second game by about an hour. 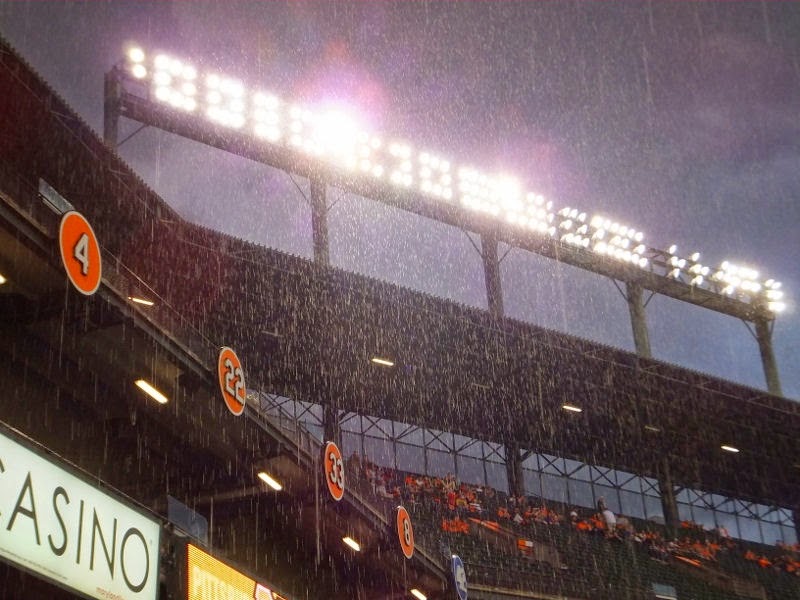 This is what 10% chance of rain looks like, in Baltimore.  No wonder the streets are collapsing.

We ended up moving around a lot, during the course of the game.  Mostly, we retreated back to seats under the deck, where we were supposed to be in the first place.  I don’t think we watched more than 3 innings from any one place.

When they finally started up, there was one moment of uplift, as 3rd base phenom Manny Machado came out to play his first game after hurting his knee late last season. 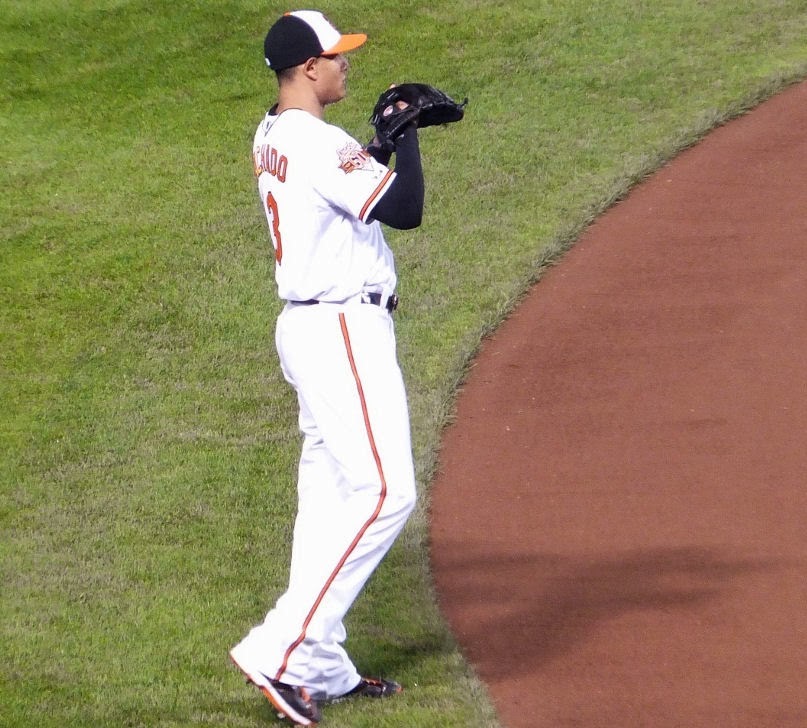 I’m sure I confused people by standing and clapping vigorously for Manny, wearing my Pirates jersey. 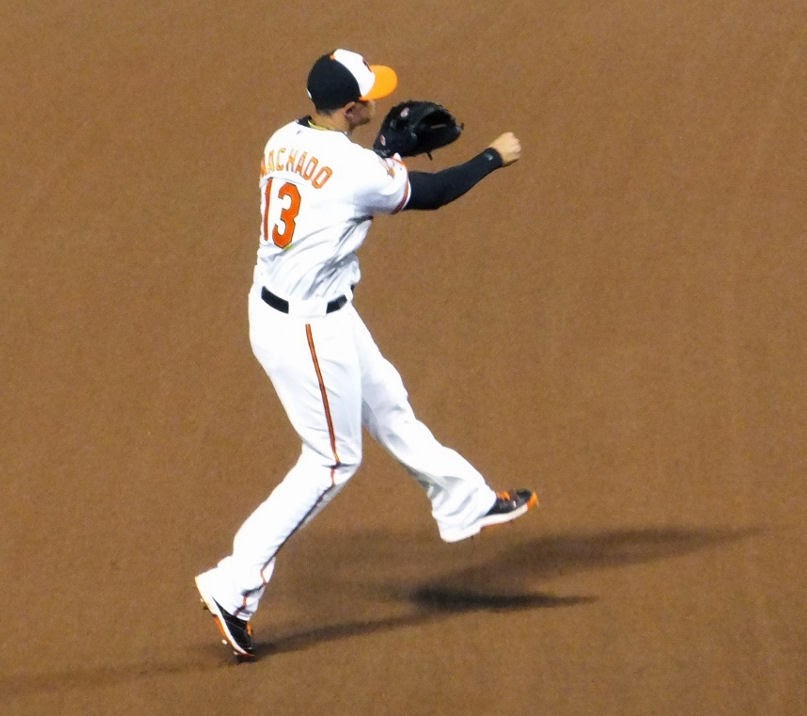 He seemed none the worse for wear, and was up to his old tricks in no time. (Even during warm-ups.)

The second game seemed to drag.  In fact the Orioles pitcher threw over 50 pitches in the first inning alone.  So by 10:00, even though it was only the 3rd inning, I’d had it.  The Buccos were up 4-0, so I took that as a sign that I was free to go.

I was going to write about the March of Dimes walk I did on Saturday, but as usual, this post went on longer than I expected. Stay tuned for more Bluz Adventures in the Wilds of Downtown Baltimore. 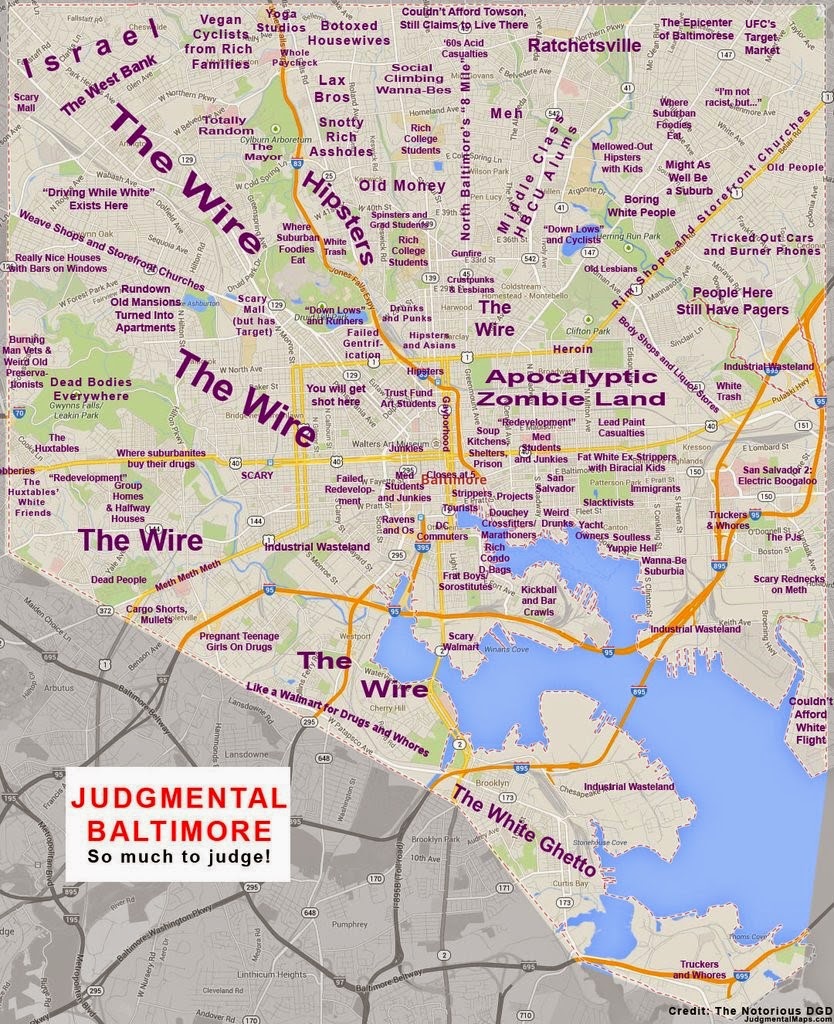 Special thanks to my brother-in-law, who sent me this over the weekend.  It’s the funniest thing I’ve seen all year.  Click the pic, to embiggen.
Posted by bluzdude at 11:41 AM