So, what does a single Bluz do on a 3-day weekend?  Whatever he damn well pleases!  Ha!

I had activities on Friday, Saturday and Sunday this weekend, so today is my day of rest.  The Orioles were in town over the weekend, so with the weather forecast stuck on gorgeous, I figured I’d knock out a couple of games.  I still had 3 tickets left over from the Pirates rainouts, so I cashed in two of them for the games on Friday night and Sunday afternoon.

I mainly wanted to go on Sunday, but since, A) I had to go to the box office in person to swap the tickets, and B) I was already wearing an Orioles jersey and jeans, for Jersey Day, I thought I might as well go to the game on Friday too.

One thing I hadn’t really considered was that on the Friday before a holiday-Monday, we usually get let out of work early.  So by getting off at 3:00 instead of 5:00, for a 7:00 game, it a solid four hours of pre-game festivities.  I got to The Bullpen right as they were opening.  I was excited...

Havent had a drink all week. Come to daddy, u sweet, delicious beer.
— bluzdude (@DarwinfishBluz) May 23, 2014

(I’ve been trying to cut back, since I returned from vacation.)

Because the street vendors weren’t set up yet, I opted for wings.  And hit a “jackpot” of sorts.

Because one of the tickets I traded in was higher in cost than the others, I used this opportunity to sit in a new place.  I was in the 5th row, under the middle deck, just to the 3rd base side of home plate.  I’d show you the view, but I forgot to bring my camera on Friday.  But I can still show you where I was… 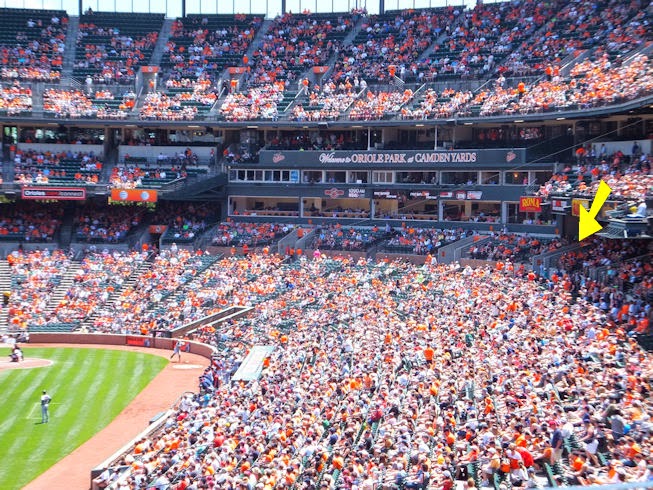 I was right beside the top of the concrete entrance wall.

It was an entertaining game, marked by homers from Nelson Cruz and Chris Davis.  O’s won 8-4.

On Saturday, I decided to go see the new X-Men movie.  Loved it.  It was a bit complicated, with lots of time travel and random space/time portals (don’t ask) but it was nice seeing the old/new casts blended together.  (I also saw Godzilla the previous weekend.  I do love my monster movies.  This one was pretty good too, if you like that sort of thing.)

After the movie, I had some errands to do.  Like flowers… I needed to go buy some flowers; some for work, some for home.  So I picked up my favorite torrenia (AKA Clown Violets) for work, 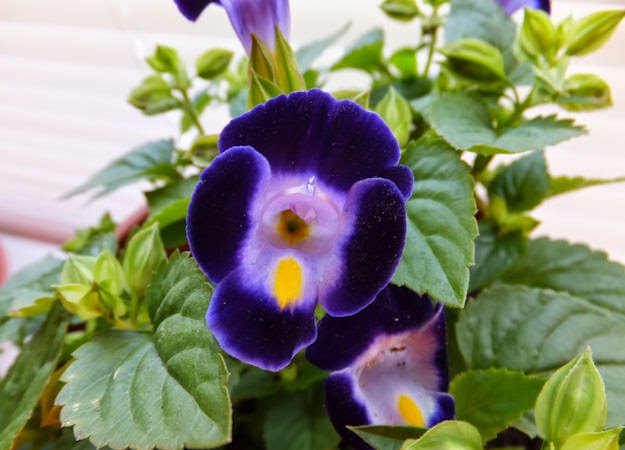 and a pot of New Guinea Impatiens for home. 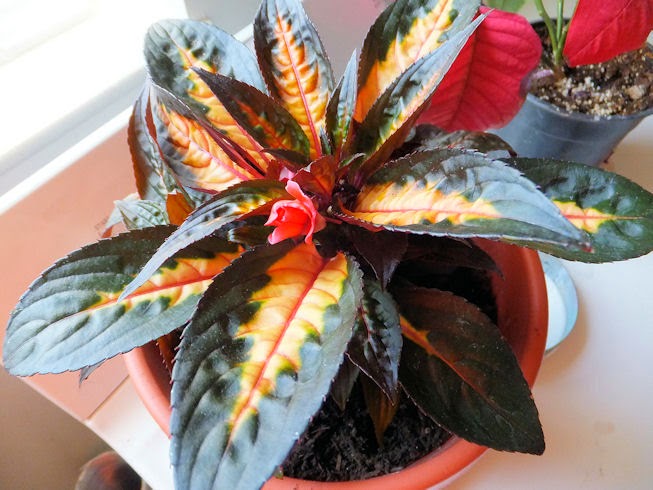 I was going to buy it just for the leaves, before I realized they were actually my favorite kind of impatiens.

After the flowers, and requisite stop at Wendy’s, I had to do some scoping out.

See, after 17 years of dedicated service, my washing machine started giving me problems.  I bought it in 1997, right after I split up with the ex-wife.  Was a cheap little GE unit, which I’ve carried around with me ever since.  But now it started to drip (into the basin) and won’t go through the usual cycles.  Rather than trying to get it fixed, I figured I’d just get another one.  Eventually.  First, I wanted to see what was out there, and more importantly, how to get one delivered at a workable time.

Because I’m a one-man shop now, I have to be here whenever something big is being delivered.

So I went to Best Buy to have a look around.  I talked with the appliance guy there and told me they can deliver on Saturdays.  He showed me a couple of models, and I picked one.  Done.

That’s another up-side to living alone.  I can go buy a new appliance in about 10 minutes.  No muss, no fuss.

On Sunday, I had to get up and going fairly early.  (That’s “Sunday early,” as opposed to “Weekday early.”)  The game was at 1:30, so I wanted to be down at The Bullpen no later than noon.  It was a beautiful day for baseball; sunny with a temperature of about 77.

After knocking down some “cheap-ass beer” and a bratwurst, I eased on over to the ballpark for a quick mosey around.  And promptly got irritated.

I took about a half step to the left and said, “Is this better?”  It was.  But I was still a little pissed off.

Here’s what they made such a fuss about. 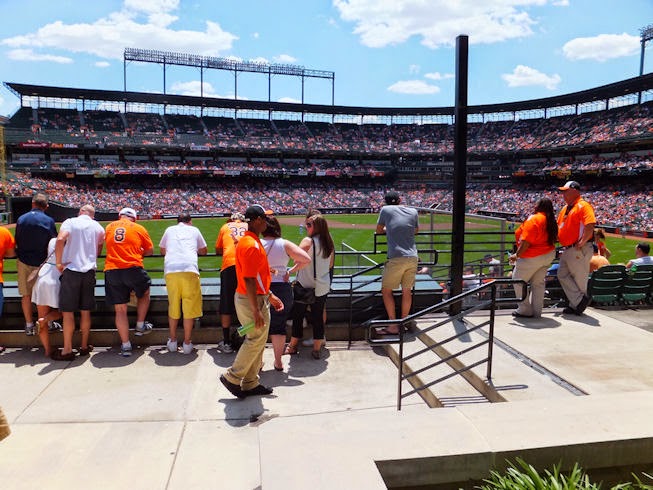 Earlier, I had been standing in the space beside the brunette with the white blouse, with the purse on her left shoulder.

That’s the usher, in the middle, coming back to move that dude on the step.  Now look, there are two freaking steps, and the aisle is about 8 feet wide.  Is someone standing at the railing really blocking anything?  I know the guy is just following orders, but those orders are stupid.

Anyway, I soon went up to my seat in the club section. 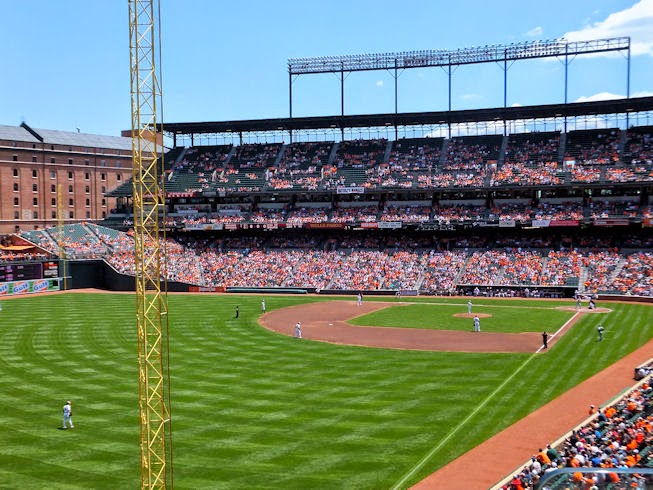 It was a gorgeous day for baseball, but I made one slight miscalculation.  I thought I’d be sitting much further into the corner.  I was counting on being shaded for most for most of the game, so I never put on any sunscreen.  Unfortunately, the shade didn’t reach me until the 6th inning, after 2 and a half hours of sun.  I would have just moved over, but too many other people had the same idea, and got there before me.

I did my best to combat the sun, by turning the bill of my ballcap to the side.  I managed to keep my face from getting burnt, but I got a little red on the side of my neck.  Next time I go to an afternoon game, I need to sit one section further down, and a couple rows higher.

All in all though, I can’t possibly complain about getting to spend the afternoon drinking beer and watching baseball.  (Manny Machado homered, and Nelson Cruz hit another one, as the O’s won 4-2.)

So, how did you spend YOUR weekend?
Posted by bluzdude at 1:10 PM

Email ThisBlogThis!Share to TwitterShare to FacebookShare to Pinterest
Labels: Baltimore Bluz, Baltimore Orioles, Bluz LIfe, Things That Piss Me Off

When I get mostly non-leggy wings, I feel gypped, nay, MORALLY WRONGED. Seven out of 10's pretty awesome!

(It's the little things.)

You know, this kind of reminds me of the Seinfeld episode about the muffin stumps. Everyone wants the top, but nobody wants the stump. The "wingy" part of the chicken wing is the "stump."

Oh, and welcome back MBG!

We are at the beach - Stone Harbor NJ - doing lots of projects at our house - and managed a few hours of beach time. Weather has been amazing. Glad you enjoyed your long weekend. I could use a few more days of R & R (if you consider doing projects around the house R &R as I do).

Lovely flowers. Spectacular deep blue Clown Violets. I remembered "Clown" but you kept saying Torrenia. Sweet under any name, like a rose.
Please don't put them in your new washer.

My biggest project was replacing the air hose on my dryer. Phew! I was beat after that one… lol…

Hope you had or are having fun at the beach.

These were the ones I was trying to find for you at Lowe’s, but the ones in stock didn’t look very good.

I love the way they photograph.

Photogenic indeed! Our Clowns are thriving!

I, too, spent the whole weekend baseballing. Although, mine was of the short fry variety. My son had a tournament in Silver Spring/Olney this weekend, and I spent all day Saturday, Sunday and then a championship game on Monday at various parks in Montgomery Co. Although, I was smart enough to slather everyone in sunscreen. :p

Well, to be fair, if I knew I was going to be out watching the games in parks, I would have worn sunscreen too. And I usually do when I go to an Orioles day game, but I thought I had taken sufficient precautions. Next time, I have to overcome my tendency to want to sit as forward in the section as possible. And I probably should have moved at least one more section to the right. (Any further, and the ticket price goes up.)

That sounds like an amazing weekend. And while we didn't go to a baseball game, Mark and I did go eat wings and drink beer on a rare night off. And while I don't think our leggy ratio was as good as yours, We ordered 20 to split and they gave us nearly 30!

In my book, getting the extra 10 wings makes up for any shortfall of leggy pieces.

I’m glad you and Mark got to spend some down time together, just to enjoy yourselves. That’s so important… Team unity at the top.

You weren't blocking the stairs. You were blocking the railing. Some people do need the railing for safety (like little old ladies with bad knees), and hesitate to ask people to move.

You know, I hadn't considered that. Granted, there was still another railing on the other side, your comment does make sense.

I retract my complaint.