Where Do You Stand?

I StumbledUpon another interesting site, today, where you can take and 11-question survey and it will identify where you fall on the political grid, marked with the following labels and traits:
Liberal/Conservative
Libertarian/Authoritarian
Centrist
More Personal Freedom/More Social Control
More Property Rights/More Economic Regulation
I’m always up for using hard data to determine your own personal “brand” so I was up for taking the survey.
Right off, I was concerned about the weighting, because there were a couple of issues where I was kind of “meh” about them and would hate for that to affect my results more that the issues about which I really cared.  Turned out that there was a final grid where you weight the importance of each issue to you, so my worries were abated a bit.
When it comes right down to it, your values are the biggest indicator of them all.  I don’t know anyone that sucks up every single tenet of their chosen political party.  There’s usually something in the party platform where people either don’t agree or just don’t care that much about.  And then there are the issues that drive who we are and what we think.  The party or philosophy that agrees with you there will be the ones with whom you identify long term.
I was also leery about the limited number of questions.  While only having to answer 11 of them does speed things along, there were some areas that went unaddressed.  For example, there was no mention of reproductive freedoms... birth control, Plan B, stem cell research, freedom of choice, etc.  The closest issue to that was more along the lines of what may be done in the bedroom and with whom, which is fine, but not really the same issue.  (As I’m sure you can tell; I came down squarely in the “Do whatever you want and it’s no one’s goddamn business” category.)
The last time I took anything resembling a test like this, I was in 10th grade US Government class, (circa 1977), where the teacher gave us a test that would similarly determine our political associations and link us to the sitting congressman to whom we were the most closely aligned.
I ended up scoring as the most liberal kid in the class and was assigned Rep. Morris Udall of AZ.  (I presume that Judie, the Hot Arizona Auntie would approve.)
So how did I turn out 30-some years later? 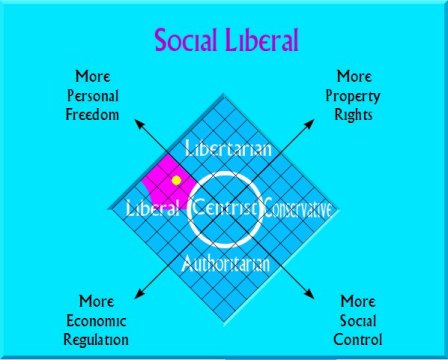 That’s me, the Social Liberal, although first thing in the morning, before I’ve had my Diet Coke, I could be considered the Anti-Social Liberal.
Looks like I moved at least a little bit toward the center, but I think that comes with learning more about the big picture.  I’d probably be an even bigger Centrist, except that the Right has moved so much further to the right it’s almost off the chart.  Today the Right would consider someone emulating President Reagan a Liberal if he followed Reagan’s actual steps (as opposed to his rhetoric or the mythology that’s sprouted up around him).
I definitely trend toward Personal Freedom, but only insofar that the rich and powerful don’t trample on the less so, just because they can.  I think that people should be able to basically do as they please, but only as long as it doesn’t adversely affect anyone else.
A perfect example is how there are some that are trying to liken cell and texting laws with seatbelt or motorcycle helmet laws.  The difference is the effect on others.  While I may support your right to have your hair fly in the breeze on a bike, it’s going to be your melon they’re mopping up off the road after you wreck.  But if you’re texting or yapping on your cell phone, you’re endangering me and everyone else on the road when you can’t stop in time, or drift into another lane of traffic.
It’s the same with the fight against the upcoming health care reform laws.  The Teabaggers are flipping out because they’re forced to buy health insurance.  The way I look at it is that we’re already forced to buy car insurance and nobody says “boo.”  You drive the car, you buy the insurance.
They try to say, “But buying a car is optional.  Everyone would have to buy health insurance.”
To this, I say, “Exactly, because everybody can get sick or injured.”  I understand you don’t like being told what to do.  But how is the answer to “preventing the tyranny of Big Government,” “making everyone else pay for your medical bills?”  Doesn’t that go against your position if favor of self-reliance?  Or is that just for everyone else, once you’ve gotten ‘yours?’
Anyway, so I’m a Social Liberal.  Now you take the survey and tell us where you land.
Note: In case you missed it, please be sure to check out my post from 12/18, which features an audio clip of my Dad telling a hilarious, true story about a wild train trip with his buddy, The Lob.  Totally worth it.
Posted by bluzdude at 6:21 PM