As I’ve ranted before, I think Maryland drivers are the worst I’ve ever lived amongst.  When I learned how to drive, out in Ohio, we learned things like how to use turn signals, how to merge, who goes first at a 4-way stop sign, how to drive on freeways, etc.

I noticed on the very day I moved from Albany NY to Baltimore, that these people here don’t really know how to drive.  (And that’s saying something, after having lived 7 years in New York.)  I wondered if they even HAD Driver’s Ed classes here…  It was like they posted a sign at the Delaware border, “Welcome to Maryland… Buckle Up Because It’s Time for Freeway Roller Derby!” 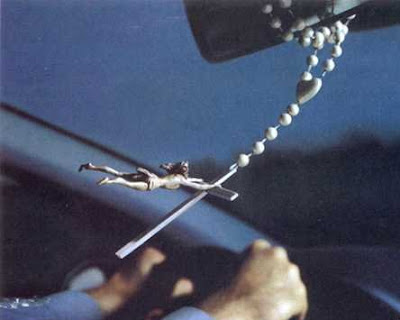 People never use their turn signals, or at least so rarely that you never know if they’re flashing on purpose.  Or in my neighborhood, if you’re waiting for an approaching car to pass before making a left yourself, they turn on their blinker about 5-feet from the turn.

“Thanks, asshole!  I could have pulled out 15 seconds ago, if you knew how to work that little stick on the left side of the wheel!”

Another trick, guaranteed to start my day off with profanity, is when they pull up to a red light at a 2-lane intersection that doesn’t have left-turn arrow, and settle into the left lane.  No blinker.  I pull in behind them, so others may make rights on red, as needed.  When the light turns green, THEN they put on their blinker and sit there while they wait for a break in oncoming traffic... like they didn’t realize they had to turn there and it just came to them.  More likely, it’s just a complete lack of awareness or consideration of anyone else on the road.

If you try to pass someone going 50 on the interstate, be prepared for them to stand on it so that you’re hung out in the left lane indefinitely.  Then as soon as you tuck back in behind them, they slow down again.

Any time there’s a merge ahead, prepare for a traffic jam.  The concept of “Right side goes – left side goes, right side goes, and so on, is unheard of.  In Maryland, they might as well just put it right on the license plates, “The Me-First State.”

So when I saw this “How Well Do You Know the Rules of the Road” quiz on MSN, I decided I’d prove my superiority on such things.

You know how this all sounds like a set-up for the author to get his come-uppance?  Not!  I nailed 18 out of 20 questions.  Whoo Hoo!

Actually, I didn’t know there would be comparisons involved, but the quiz took my age/state/sex demographics at the end.

I’m really kind of pissed I didn’t get them all, because the 2 I missed, I guessed what I thought a cop would say (meaning more rigid) rather than what I thought made sense in real life.  I’d be more specific here, but I don’t want to give away any answers in case you want to try the test yourself.  I’ll talk about them in detail, in Comments.

So what did I learn?  Looking at the results grid, Maryland is right about at the national average.

Great.  So the whole country’s drivers are going to hell in a hand basket.  I feel so much better now.

It also looks like all but 2 demographics are within 3 points of the average.  First, ages 15-24 have the lowest average score, with 75.  If most states require an 80 to get a license, that means trouble for the youngsters. Good thing this little online test isn’t legally binding.  Although they ARE giving the field a handicap… they were probably texting while they were taking the test.

The other nugget there is that women, with all ages combined, average a score of 78, which is also below the bottom limit for licensing.  Now I thought that it was supposed to be a myth about “women drivers.”  Hmmm.

Don’t blame the messenger here!  I’m just reporting the numbers.  So take the test, and let me know how you did!
Posted by bluzdude at 6:59 PM

Email ThisBlogThis!Share to TwitterShare to FacebookShare to Pinterest
Labels: Baltimore Bluz, Bluz LIfe, Things That Piss Me Off