The Year in Bluz

In February of 2009, I started Dfish2 because I thought I could entertain a few people and I needed somewhere to put the ideas that would bubble up through the sewage treatment center that is my brain.  In September of that year, I picked up some non-family readers in Pittsburgh that not only encouraged me, but became friends.  That was a thrill in itself.

2010 was the year that I was able to burst out of my Pittsburgh nucleus, extend some tendrils and make friends with other bloggers in far-flung portions of the country.

There was Miley (who allowed me to defile her site by guest posting), Jennifer Juniper and Oilfield Trash out in Texas.  Mrs. Bachelor Girl and Jessica R. in Shreveport, may or may not be Bayou, depending on who you ask.  Nearby, I worked with Sally in Oklahoma, and together we assembled a post pondering the possibilities of what would happen if the 3 Wise Men jumped in Jesus’ cradle for a bobsled run.

I met Judie, the Rogue Artist from Arizona, from a link on friend-of-Dfish site AskCherlock and she’s been an artistic inspiration ever since.

For sheer craziness, nothing beats the Crazy Brunette and her drunken Royal Family out in Kansas.  California hosts another cluster of ladies that are both hot and cool at the same time: Kernut the Blond, Jayne, and Miss Nikki.

A mutual friend on Facebook arranged a blog-meeting between me and Sherry, also grew up in NW Ohio and knew some of the same people I did.

I also began trading visits with Christy in Wisconsin, Cristy in West Virginia, Raven in Minnesota, the Faux Trixie in Chicago, Katie in NYC, Mama Fargo in Wyoming and Sandra in Manitoba.  Everyone I mentioned above has a link on my blogroll.

But I wanted to do more today than just shamelessly name-drop.  The year’s end is always a good time to take stock of where you’ve been.  As I look back over my 200 posts this year, (yes, 200 even...  today’s is 201), I have to smile at the ground covered.  I got to tell a lot of cherished stories and call “bullshit” on a lot of political malfeasance.

January
I started the year with a road trip story covering our family trip to Miami for the Steelers/Dolphins game.  No hurricanes, this time.  I got to tell the story of my late best buddy Brill and our connection with the late singer Warren Zevon.  Later, I wondered how cool it would be if we could engineer our lives like they do on DVDs, complete with bonus features and commentary.  I bestowed upon the world my humble recipe for the Porkchops of the Gods and unleashed the phenomenon that is the Pork Chop Dance.    I also explained how if people would just do everything the way I say, we’d all have more spare time to watch TV and play on the Internet.

February
Right out of the chute, I wrote about our family’s experiences with Super Bowls, and about going to Super Bowl XL.  I wrote about the Best Cat Ever, my old Siamese buddy Amos.  Keep a tissue handy for that one.  On a lighter note, I stole and adapted shamelessly from the Bachelor Girl and did 15 Reasons Why Being a Bachelor Guy Rules.  In Holy Shit, I define my spiritual realizations and aversion to organized religion.  There was enough conversation in Comments, I did a follow-up right after.  You guys are the coolest readers!

March
March was dominated by my series of stories and remembrances of my time in the record business.  The “Brushes” series tells about when I got to meet loads of famous musicians, from bluesmen like Albert Collins and Lonnie Mack, to legends like Lynyrd Skynyrd, John Fogarty and Meat Loaf, to my queen, Joan Jett.  March also was when I began mining the gold that is Sitcom Kelly, for bizarre and preposterous ideas and scenarios.  This is the post that introduced the newest culinary fare: “Bacon-wrapped Kittens.”

April
To capitalize on April Fools, I did a series where I recalled some of the greatest pranks of my youth and not too distant past.  I covered 3-hole punch holes, fun with OCD, ways to stay amused in someone else’s office, and the Great Stick Horse Incident and Year-Long Identity Switch.  That provided the perfect opportunity to finish writing about transforming our amazing Party Barn and the music that lied therein.  I wrote about my time on college radio and included a clip of my explosive farewell.           The beginning of Little League season for my nephew triggered these stories of his father and I playing in our own Little Leagues.  How does one explain to a boy that his dad was a notorious beanball pitcher?

May
I wrote the story of my brain-rattling brush with precognition or “dream flashes.”  I took personal responsibility for the Penguins’ failings in the Stanley Cup Playoffs.  I also covered in glorious detail, the wonders of vacationing in the place of my misspent youth, Whitehouse Ohio.

June
June provided me with the biggest hits bonanza ever, when first I posted a story on the gargantuan statue of a floating half-Jesus as commissioned by a couple of preacher/charlatans and then a week later, the flippin’ thing got hit by lightning and burned down!  This gave birth to my new favorite expletive, “Great Flaming Jesus!”  I got Google hits from everywhere on that one.

July
We celebrate my parents’ 50th anniversary with a trip to Amelia Island Florida, and encountered the greatest restroom wall ever, in the Jacksonville airport.  Buying a new car gave me a chance to talk about my previous cars and chronicle obtaining a new one.  I also felt it was time to tell the stories from my sordid past: the first time I got completely shit-faced drunk, throwing my first party and how we almost got our asses shot off by stealing pumpkins.  My favorite line I’ve written this year also appeared in July, in regard to Sarah Palin and her pseudo-Shakespearean ways.

August
August was huge.  A trip to Pittsburgh gave me the opportunity of a lifetime to meet my Burgh blogging buddies at the Darwinfish Fry, attended by the Cherlocks, Cassie and Carly, the Carpetbaggers, DG and husband, and the Bitches from Bitchburgh.  Seriously, meeting you all was the highlight of my year.  Also included in the trip was the no small matter of my folks 50th Anniversary Hootenanny and Jamboree.  I took the opportunity to tell my Favorite Story Ever.  It’s not every day that your (future-ex) wife gets stuck upside down behind a major appliance, AND gets caught wandering around your back yard naked.  I also took the time to talk about how I became a “Bluz” dude.  (One word: SRV.)

September
More old stories surface via use of my new Wayback Machine, where I describe what I would change about my past, if I could go back in time and have a do-over.  Needless to say, they all involved girls: the 9th grade roller skate girl that got away, the 7th grade hussy that I was too incompetent to land, and how it took 3 months to kiss my 10th grade girlfriend.  I told my own September 11th story, and included video clips from my trip to the top of the Towers.  Then I got to take another trip to Pittsburgh to attend Podcamp Pittsburgh 5.  I hung out with my Darwinfish Fry friends and still had time to stalk (and meet) the elusive PittGirl!  Attending Podcamp left me re-energized and ready to charge headlong into hitting the tough topics.  It doesn’t get any hotter than the abortion and sex education debate.

October
My birthday is October 1st, and that spawned the telling of a life-changing story that began on my birthday in 1997.  October also found me mourning the loss of anything funny on Saturday Night Live.  Friends were big this month, as I discussed one friend’s house getting robbed, and penned a tribute to my Ex Work Wife.

November
November brought the political season to an end.  Prior to Election Day, I posted my last-ditch effort to stem the tide of anti-incumbency based on the inability to fix 8 years worth of abuse in 2 years.  Much like Republican policy for the middle class, it didn’t work.  To focus on a happier time, I told the story of my favorite party ever, my wedding day.  So what if I married a psycho?  Another silly email thread with Sitcom Kelly was trotted out for a cheap post.  I gave thanks to the simple things that make me happy here, and told of a frustrating Thanksgiving from my youth, here.

December
Eh, just scroll down.  You want me to spell out EVERYTHING for you?

I have to go back to work tomorrow and then Pinky and I are going out on the town for New Year’s Eve and staying at the Hilton across from Camden Yards.  But before I disappear, I’d like to take this time to seriously thank you, Dear Reader, for spending portions of 2010 with me.  It’s been my privilege to have the opportunity to tell you stories and tell you what I think about stuff and generally make light of the world around us.  And I’m especially honored when you tell me stuff back.

So whether you’re a regular commenter on every post I write here, or that person from Anchorage Alaska that keeps stopping by but never comments, (Hi Sarah, sorry about that “Out damned twat” comment…) thank you so much for encouraging my behavior.

Have a safe and festive New Year and I look forward to spending time together in 2011. 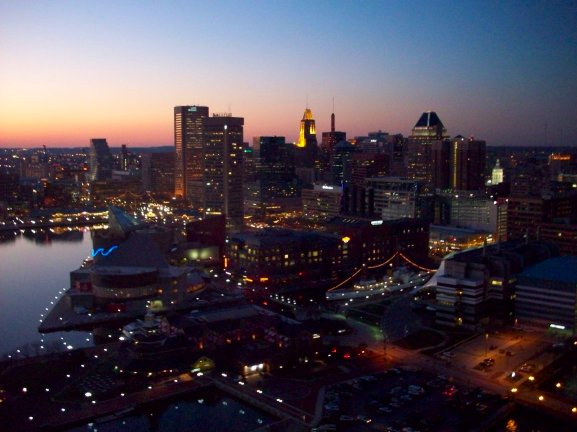 I'll be back after this weekend to start with next year's memories.
Posted by bluzdude at 2:48 PM