It’s sad that we have to lose our sense of wonder and become jaded adults.
Remember how amazing it was when you first got out of your family’s house and into a place of your own?
I moved out of the family house in pretty good order.  I commuted to college so I never dealt with dorms or off campus housing.  I knew I had it good at home… remember, we had The Barn.  And I was basically a pretty responsible kid so I didn’t really have any restrictions on my comings and goings.  I could have stayed much longer.  Hell, if we’d have had a bathroom in The Barn, I could have lived out there.
But after I graduated college, I figured it was time to flee the nest and strike out on my own.  Plus, I really wanted to shack up with my girlfriend.  So we engineered a pretty decent plan, even though it had to be semi-secret.
Well, the secret had to be kept from HER parents… mine were fine.  They were probably thinking, “One down and two to go.”  But while I was a newly minted college graduate, she was only a (college) sophomore, an only daughter and the baby of her family.
So from the time I graduated, we began buying various house things, like dishes, sheets, towels, kitchen utensils and stuff like that.  We stored it in our attic at home until she could break the news to her folks.
We found a nice little place to live right there in Bowling Green.  She lived in town and was still going to school there, and I certainly liked the area.  Hell, as a commuter, I hardly got to spend any time outside the campus, so I liked hanging out there.
The apartment was a converted garage.  It was set back from a main house (which was also divided into a couple apartments).  We had 2 bedrooms, a living room, dining room and kitchen.  It had everything we needed.
The only problem is that I was the only one working and I couldn’t afford the place by myself, so we had to find a roommate.  As luck would have it, we had a mutual friend that was going to grad school there.  I knew her from my radio-TV-film classes and the college radio station.  We used to sit in on each other’s shows.  My girlfriend knew her from doing Community Theater.  (The Girlfriend was a theater geek… she acted in plays and directed the local children’s theater.)  So it was decided that we should all throw in together and that’s exactly what we did.
It was kind of like the old sitcom “Three’s Company,” except I didn’t have to pretend to be gay and I got to sleep with one of them. 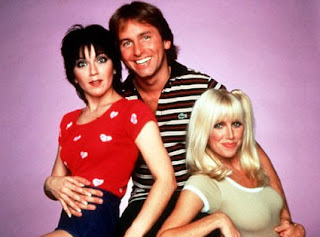 The year we spent there is worthy of its own post, because it was, how should I put this… “eventful.”  (See, I never told the Girlfriend that I used to have a huge crush on the roommate when we were in school together.  While I never got anywhere with that at the time, I nonetheless didn’t see the upside to mentioning that little fact.  )
Hell, living with two women, the inside of the bathroom was only a rumor to me… something I’d heard about but had never seen for myself.  And there was always a tug of war going on about something… who messed up the kitchen, who had to clean what, who ate whose leftovers, what to watch on our only TV… it was constant drama.
One time the Roommate made a crock-pot full of chili, then forgot about it.  For days.  It cooked all the way down to crust.  And then she still never did anything about it, so the Girlfriend picked up the whole thing and left it in the Roommate’s bedroom.  (Where it sat for another couple of weeks.)  And I STILL had to listen to the girlfriend complain about it.
Before 12 months had passed, the Girlfriend and I had broken up (amicably) and I was boinking the Roommate.  (Like I said, this place is a post or two by itself.)
So with all that going on, this place really didn’t seem like “mine.”  I was just a bit player there, so by the end of our lease, I got out of there like a bat out of hell.  I moved into a small efficiency apartment right up by the record store where I worked.
It had a kitchen with a counter, a living room and maybe a dining room if you divided it up, one small bedroom and a bathroom.  It cost me like $180 a month.  But best of all, it was mine; all mine.
That changed everything.  I mean; I didn’t have jack shit… I had a bed, a love seat, and matching chair from The Barn, a wrought-iron book case that served as a stereo stand, a 24” TV, my desk, and a couple of peach-crates full of records.  That was it.  And I felt like I’d hit the jackpot. 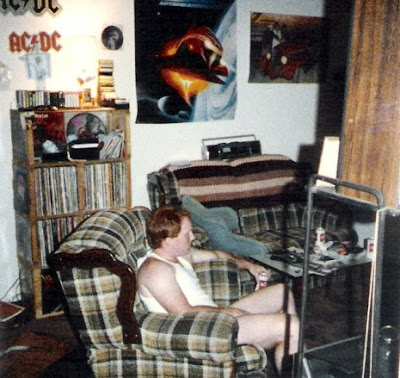 Same stuff, different apartment.
I’d come home from closing the store, crack a beer, sit in the chair and just look around.  I’d think, “Oh man… this is MY place.  I actually have a place.  Maybe I’m a grownup now.”
It still felt funny, thinking of myself as a grownup.  It was while I lived there that I first got called a “man.”
I was at work and told some kid we were out of something and he yelled across the way, “Hey Mom, that man said they’re out of Def Leppard.”
I was like, “What ‘man’?  I just told you… ohhhhhh…”
Suddenly I felt like Muddy Waters. 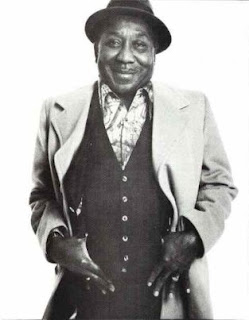 “I’m a M-A-N, man!”
It’s funny how those feelings are fleeting.  No matter how many more things you accumulate, or how much bigger a dwelling you have, it’s not quite the same as that first taste of adulthood.
I also it was there that I learned how to cook.  First, I had to unlearn what I learned about cooking from the Girlfriend.  (No, a can of peas does NOT require a half-stick of butter.)  And I can thank my brother for teaching me how to make a steak.  He caught me making one in an electric fry-pan, the way Mom used to.  (Note: never let the vegetarian cook the steaks.)
Ed said they made steaks at his frat house at Ohio State all the time… “Use the oven broiler… 5 minutes on one side, 4 on the other… done!
Boy, did THAT ever open up some opportunities.  Until that moment, I had no idea that you could make your own steak as good as the ones you got in restaurants.
Anyway, I lived there for about 8 months, before I up and moved to Cleveland to go manage my own record store.
Moving away from your home, to a town where you know no one?  Now THAT’s when you become a grownup.
And then you learn that sometimes being a grownup is over-rated.
Posted by bluzdude at 7:47 PM

Email ThisBlogThis!Share to TwitterShare to FacebookShare to Pinterest
Labels: Best of Darwinfish, Bluz LIfe, Stories and Misadventures, The Barn