The Continuing Adventures of Sitcom Kelly

You remember my friend Sitcom Kelly, right?  She’s the one who wants to put a Silence of the Lambs pit in her basement for the purpose of capturing and keeping Pittsburgh Penguins defenseman Kris Letang (and possibly former Steelers kicker Matt Bahr).

This weekend, she made a pilgrimage to Pittsburgh to see her first game at the new Consol Energy Center.  The Pens were playing the Florida Panthers Sunday afternoon.  This afforded my friend a new opportunity to stalk the object of her twisted desires.

She had good seats too, down by the goal that the Pens defended twice. 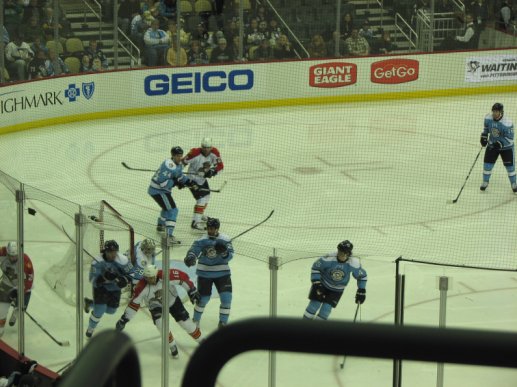 This gave her the opportunity to get this picture of the Pens goalie, Marc-Andre Fleury. 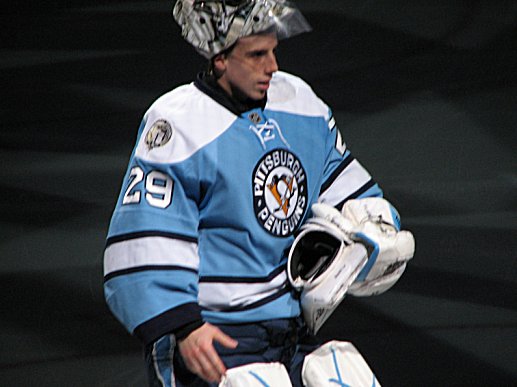 As she emailed me some of her pictures, which included several of Letang’s back, I wondered why she never got one of his face.  Or maybe she did, but was keeping it to herself.  I can see her tacking the photos up right now, onto her stalker photo-board, along with the rest of the surveillance shots.

I suggested that maybe the reason she didn’t get any face shots was that maybe he, like other prey, got spooked by her presence. 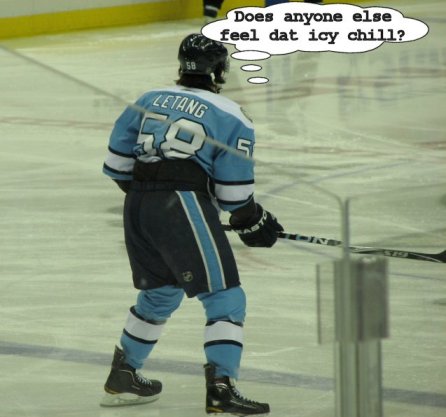 Later he seeks advice from other members of the pack. 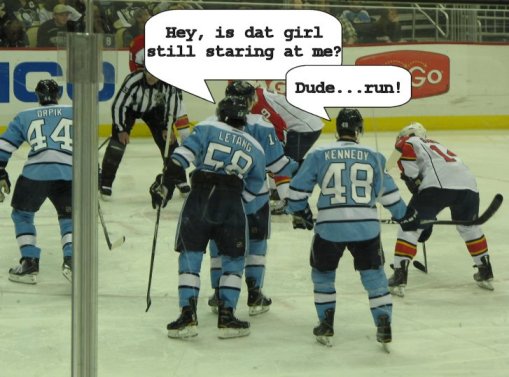 With his sense of danger confirmed, he spends the rest of the game at the other side of the ice. 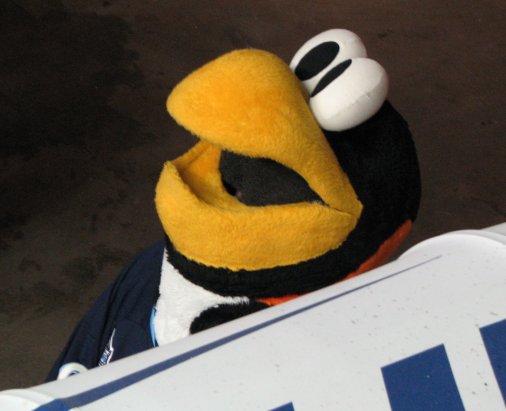 Iceburgh proved to be scrappier than she expected so the plan was abandoned.  Jean-Claude Van Damme made it seem so much easier in "Sudden Death."

Sensing that his adversary’s spirit was broken, Letang sent over a delegation of elders to “reason” with Sitcom Kelly. 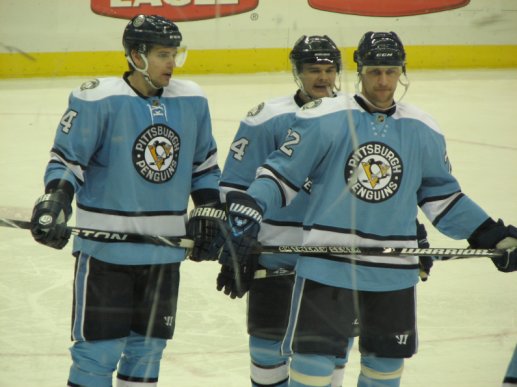 Elder Kovalev, flanked by Elders Kunitz and Michalek, plead for leniency, so that Kris can finish the game in peace.

All was well in the end, as James Neal iced the game in an overtime shootout. 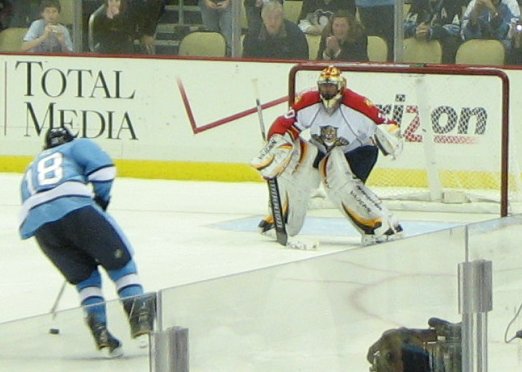 So with Letang off the market for the time being, Sitcom Kelly mentioned that she had another iron in the fire.  We emailed about it this morning:

Kelly: I think I told you how I was going back on (dating site) Plenty of Fish?  This guy emailed me the other day.  He works for some radio station covering the Nationals and Capitals games.  HE GETS FREE TICKETS!!  Am I really that shallow that I’ll date this guy for his free hockey tickets?  If he gets playoff tickets… Ohhhh baby!  Ka-ching!

Bluz: Does he know you’re a Pens fan?  That might chill the relationship off.  “Sitcom Kelly” would totally date for hockey tickets.  It would be funny if she left her “benefactor” so that she could stalk Letang between periods.

Kelly: He does not know I’m a Pens fan.  At what point should I tell him?  I guess he’d find out when I’m at the game all prim and proper until the Pens come out onto the ice and I rip my top off and underneath is my Pens hockey gear.  Kinda like Superman.

Bluz:  That would be hilarious.  It would also ensure that it was your last date.

Later I asked where they went around town.  Among other places, she mentioned they went to Primanti’s.  I thought that was weird because she’s a vegetarian.

Bluz:  Hey, what YOU get at Primanti’s?  A sandwich with nothing on it but fries and slaw?  (Primanti’s is famous for jamming the fries and coleslaw right into the sandwich.)

Kelly: Fish sandwich.  My brother-in-law was all excited because he’d seen this place (and the woman at the counter) on one of the food travel shows.  I got a t-shirt… not exactly why.  I’m sure I’ll never wear it.

Bluz:  Why wouldn’t you wear it?  It’s not like the dum-dums here would know it’s a Pittsburgh shirt.  Or did you buy an ugly one?

Figures.  Here’s a chick that doesn't like cheese but still orders cheese sticks, quesadillas, nachos and cheese pizza.  Why wouldn’t she buy a t-shirt when she doesn’t wear t-shirts?

Liner Note: I was going to post a couple of her pictures with the thought bubbles as a part of a larger “Odd Bits” post, but next thing I knew, a whole post jumped out.  Sometimes “inspiration” plays hell with “planning.”  Also, I should note that all photos were taken by Sitcom Kelly and were used with her kind permission.  (Unless you notice later that some are missing, in which case permission has been revoked.)
Posted by bluzdude at 7:11 PM

Trash,
I kid SK but she's a fabulous photographer. I keep trying to get her to start a photography blog, if she won't write about her "other' adventures.

Funny with great pictures indeed. Good to see Flower sans mask.
You compliment Primanti's by calling that stuff "cole slaw". How about cold, sour, limp cabbage that any Pittsburger would pitch in the garbage. Tightly wrapped, of course, to seal off the stink.
What do the tshirts look like?

Love the pics. And the post. It was all good. Thanks for the giggles. :D

That Marc-Andre Fleury guy totally looks like my husband when I met him 8 years ago.

Primanti's is my "I can't stand this stinking job anymore" guilty pleasure. There's nothing like drinking at 2 in the afternoon in that place in heels and a skirt. I totally fit right in.

And, there are a lot worse reasons to date a guy.

Mary Ann
It’s hard for me to make the call on the slaw in the first place. It’s all icky to me. No such thing as “good” coleslaw. Only cabbage I can tolerate is in an egg roll.

I’ll see SK tomorrow for Happy Hour so I’ll ask about the t-shirt.

Raven
And I do like to make the little girls giggle…

SK does take some outstanding pictures. You should see the ones she takes when she’s out and about.

Jessica
I KNOW, right? Everybody likes cheese! We even say it when we smile!

So was your husband a playa? Cuz MAF does very well with the ladies… So now your husband can go up to him and say, “Look at me! I’M your future!”

DJ
I can’t picture you in a skirt and heels, at all. But that’s just because when we met, you were wearing a Steelers t-shirt. So that’s how you’re permanently imprinted with me now.

And SK has totally dated people for less… like if she was hungry that night and could use a meal. Hockey tickets would be a step up.

Sitcom Kelly sounds like an awesome chick. I hope she finds her a good 'un. Those dating sites can be ridic.

Sal,
The tales of Sitcom Kelly's search for Mr. Right is long and legendary. It's enough to, well, make a sitcom about.

HA! The photo captions are the best part!

Mrs. Bachelor Girl,
The captions were the whole point. Everything else was just filler and exposition.

And I'm sure if she keeps ripping her top off, he will totally overlook the Penguins thing. He is a guy.

Bagger,
We know… she’s a walking contradiction. But I think the early vegetarians ate fish… I think they evolved to become more hardcore about it later. Or maybe I’m just thinking of all the people I know that just don’t eat red meat.

It would be especially cool if Hockey Ticket guy had tickets up on the glass. I bet that could get Tanger to check’em out.

The double egg and cheese sandwich at primantis is pretty kicking. The just cheese is okay. Sitcom Kelly must be one of those new fangled pescaterians...

RPM,
Add a couple layers of bacon or sausage and I'm in!

Cheese? Yup, it totally gave me high cholesterol as a child.

All this hockey talk and all you can say is "cheese?"

We were a Velveeta family. Mom used to give me a slice when she was making mac n cheese, and I'd run away with it and pretend I was a mouse. (When I was little... not, like when I was 15.)

But still, to this day, a hunk of Velveeta makes me want to run behind an easy chair and nibble on it.