Now we swing from the tawdry to the mundane.
You know how I like to keep tabs on what Internet searches bring people here to my site?  It seems that over the last couple of days, I’ve had some more corkers.  I just wish I knew what the hell people were thinking when they search for this stuff.
I’m also kind of bummed because I know they must be disappointed when they land here and it’s not even close to what they’re looking for.
Like the person from Brazil that was searching for “shit knockers.”  Was he looking for someone that someone that knocks shit around?  Or really messy boobs?
Perhaps I should get him together with the person from Colorado that searched for “evil butts.”  Although being from tree-hugging, granola-eating Colorado, they were probably talking about cigarettes.
Someone from Morgantown WV searched “forced diaper boys,” and landed on my babysitting/diaper changing post.  I have to guess that they were pretty disappointed with what they found there.  You know, when I discovered that search, I swear I could hear the banjo music playing in the background.
Most of the bizarre searches are sex related and I hadn’t really gotten many of those until I posted those last two stories.  You may have noticed that I changed the operative term from “Bow-Chicka-Bow-Wow” to “Bow Chicka-Wow-Wow.”  I did this intentionally because I kept getting searches for various plays on “Bow-wow,” like “bow wow sex story” from Illinois, and “bow wow kiss & tell story,” from Sheffield, UK.  I should probably forward those IP addresses directly to the ASPCA.
My “Three-Way of Love” post pulled in this search from Indianapolis: “2 girls riding each other w/ one girl.”  That’s so specific, yet I have no idea what the hell he’s talking about.  Perhaps he’d have better luck taking after this guy from North Carolina, who searched for “pregnant drunk sluts.”  Perhaps I should have directed him to “Bitchburgh.”  (Just kidding, Mindbling.  Please don’t hurt me.)
I have to really wonder about the Mormons.  I got this search from Provo UT, “accidental attack wild huge rack.”  Either those are song lyrics, or this guy needs to go knock on some doors to work his shit out.
The Swiss are certainly not neutral when it comes to senior citizen sex, as attested to by this search from Zurich, for “nasty horny Grandpas.”  Yodel on this, baby!  And leave my little Grandpa alone!  He’s not that kind of guy… he’ll tell you himself!
A couple of more searches just defied explanation.  Someone from Victoria BC searched on “Googly-eyes Canadian.”  Looking for Dudley Dooright, maybe? 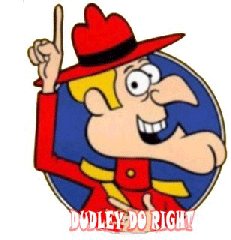 One Googly-Eyed Canadian, at your service!
Someone from Tennessee searched on “Stop off & buy a lighter.”  They hit one of my concert stories, but what I want to know is what someone could possibly have been looking for.  Was the searcher a traveling Bic salesman?
Someone from New Hampshire searched for “Civil war people looking worried.”  Again… so specific.  But it cracked me up because I’ve probably done something similar when looking for a picture to accompany a post.  Like the girl-in-car pic in the last post.  I think I searched under something like: “smiling drivers.”  Perhaps that site owner was as entertained as I am.
But for as specific as that civil war search was, others are cryptic to the point of being incomplete.  Like the guy from Sydney Australia who searched for “my dad did,” and found my $#!* My Dad Did post.  But in this case, was he answering a “whodunit” question?  Or was it more like “my dad did” not have sex with that woman?
Sometimes there are spelling issues, like when the guy from South Africa was looking for “who killed 2puck.”  He may have been trying to solve the mystery of rapper Tupac Shakur, but all he got here for his trouble was a healthy dose of Pittsburgh Penguins.
The most intriguing search I found actually hit pretty close to home.  The search was from Helsinki, Finland (home of the Syndrome) and he was looking for: “Mangela Fera Factor.”  This was actually a search for my cousin Angela who was on Fear Factor, whom I talked about a couple posts ago when she had her baby.  I have to be impressed by the Google’s search prowess, because I didn’t even mention “Mangela,” plus the dude misspelled the show’s name.
During the Fear Factor episode, Angela’s partner Zack mentioned that he calls her “Mangela,” because of her athletic prowess, especially in throwing a football.  Girl can wing it about 40 years.  She was throwing bombs all over the parking lot when we were together in Miami for the famous Hurricane Game.  I was surprised that Google could pull all that together.
Angela was not terribly pleased that Zack dropped that nickname on TV, which was now spread all over Pittsburgh.  In fact, when she came in to work the day after the broadcast, someone had taped an “M” in front of her office nameplate.  She’ll probably be even less pleased that I just dredged it up again.
But speaking of my dear cousin, she did me a solid by providing me with a nice clean segue into a closing and otherwise unrelated bit.
She emailed me pictures of my aforementioned Grandpa, not being nasty and horny, but supervising the making of ‘polenta’ aka “mush.”
I’ve never been to the polenta feast, so I followed up with Angela to get the scoop.  Here’s her report:
The "mush" (polenta) gets eaten straight from the wooden board.  First, it has to be boiled and stirred for a long time under Grandpa's strict supervision.  Once the mixture of water and cornmeal is thick enough, it gets spread with the big wooden stick onto the large wooden board.  Next the sauce is placed on top and spread all over the mush.  It is a special sauce with meat and mushrooms and so good!  Then meatballs and sausage are gathered in the center of the board on top of the mush/sauce layers and then Parmesan cheese is sprinkled over the whole thing.  People gather around the board with only forks and wine glasses.
The traditional rule was this:  you had to eat a trail to the center before you could get a meatball.  Also popular is eating the mush to form the shape of the U.S. and particularly the southern panhandle states.

My mom told me a story about a time when they were eating mush in Grandma and Grandpa's dining room and some people came to the back door, I think asking to use the telephone.  She said when they came in and saw the table they looked shocked at seeing the mush feast in progress!
I am not sure how often our parents ate mush, but I think it originated as a cheap way to feed a lot of people.  Now my parents have the board and the stick, and they host the mush feast about once a year, usually in February.  It is a good, cozy meal for cold weather.  Today they would call it "comfort food" but we just call it mush. :)  Below is a poem I wrote about the race to get the first meatball, just for fun.
Mush Race
O meatball centerpiece,
soft pyramid of treasures
hand-rolled and soaked
in velvet red tradition.
I long to reach you,
first, before the others.
Before we taste the golden
depth of our journey
and forget about the race.
Man, I have to get out there for one of these.  And I will totally kick some ass getting to one of those meatballs!   Game on! 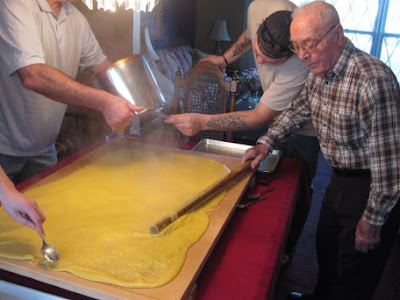 As you can see, even at 95, Grandpa can still wield the Polenta Pole. 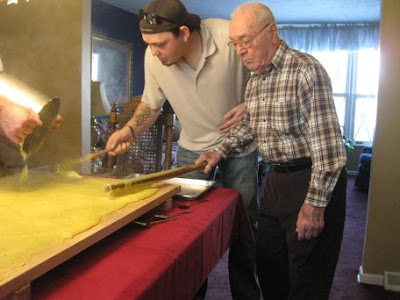 Grandpa with grandson Greg.
Now these pictures are from 2007.  I just happened to have them in The Archives: 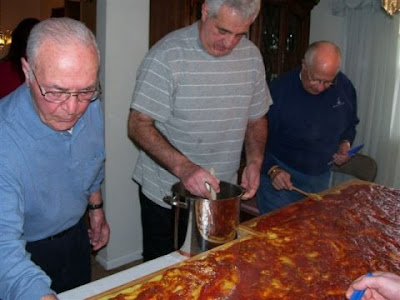 Spreading the mush is a manly task! 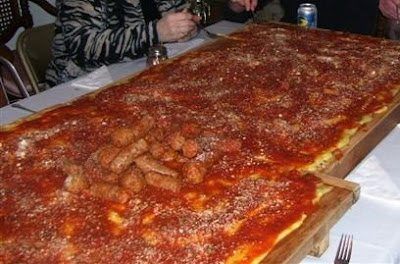 This is what the final result looks like.  I’d hate to have to eat all the way in from the end of the table.  I'd never win the race. 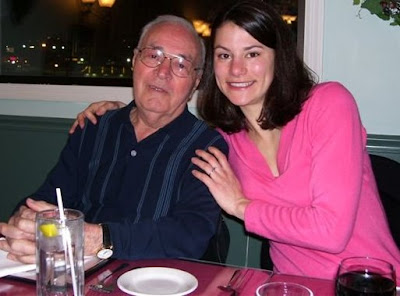 Thank you to Grandpa and Angela, for this fine tutorial!
Ciao!  (Or maybe in this case… “Chow!”)
Posted by bluzdude at 7:09 PM