I'm Not in Stereo City Anymore, Am I? 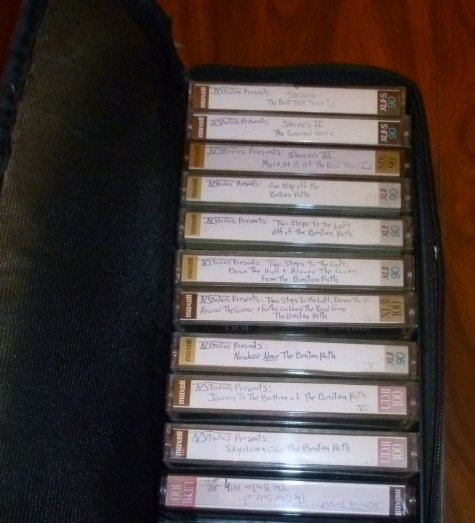 I used to love to drop snippets of movie dialog in between songs.  If I couldn’t use movie lines, I’d use snippets of the recordings we made in The Barn.  I especially liked to put the snippets into tapes I made for others… I knew it would surprise them.  Sometimes I’d do those “interview” things where the narrator asks a question and a snippet of music as the answer, like Dickie Goodman used to do in the 70s.  (Mr. Jaws, Energy Crisis ’75)
Dad used to have me make him driving tapes, and tapes for special occasions like his reunions.  He’d have me do 2 or 3 fast ones, then a couple slow ones, so the rest of the geezens could catch their breath.
As I mentioned in a prior post, I pre-recorded a couple hours worth of music I used at my wedding.  Not only did it work, I got to keep the tapes and use them at other occasions.  In and around these, I also had tapes with a single band on them, tapes for special occasions,
My big “Masterpiece” was called “The Fuck You Tape.”  It was a work born of the pain of a breakup.  It had 4 parts, the first of which was The Realization, featuring songs about learning that your relationship is in trouble.  Next, “The Downward Spiral,” was about the descent into hurt and craziness.  Third was “Hitting the Bottom,” which featured a whole lotta drinking and ‘mah girl done left me’ blues songs.  Finally, “The Recovery…Fuck You!” featured songs about getting back on your feet and putting that screeching harpie behind you for good.
It was my “Dark Side of the Moon.”
This is what I’m leaving behind: a lifetime of music, sequenced with a purpose.  I have no idea what I’m going to do with them all.  I’ll probably never play any of them again, but I put too much work into them to throw away.  I suppose I’ll keep them for the same reasons I keep everything else.
Memories… good ones.
But the next time I hit the road, I’ll be hitting it digital-style.  I can play CDs, plug in my MP3 player, or just stick in a flash drive.
Something tells me I’ll soon be putting a lot of work into some new playlists.
Posted by bluzdude at 7:40 PM

That is cool. You have inspired me to get new speakers for the back of my car as they are both blown.

And they sell a thing that plays cassettes and comes with the cable and software to burn them to your computer.

Trash,
I have one... I can transfer LP, cassette or CD into a computer file. Not crazy about the quality on the LPs, but the cassettes come across fine, if they're not too worn out.

My Buick, which I've had for a year, is the first car I've ever had with anything other than a radio in it. It has a CD player and a cassette player. When I bought the car I thought to myself, "Who even owns cassettes anymore??" Now, I know. You do. ;)

I am, however, in heaven with my CD player. I hate the radio. They hardly ever play anything good.

'Mix tapes' - haven't heard that in a while. My dad had an old Mercury Cougar while we were kids. Great car, and it had an 8-track cassette. Remember those big clunky things? We had a Lynda Carter tape. Yup, she sang, too.

Raven,
Why let someone else choose your music? That's how I see it... I never cede control of my music, especially to giant programming services that spew the same crap from station to station.

Kernut,
Oh yeah, I remember 8-tracks. We never had them, ourselves, but I had friends that had them. They were always a pain in the ass to work with.

I never called them "mix tapes," they were just tapes that I put together, as far as I was concerned. But getting the mixing board was a game changer. No more dead air... not even for a second. And goodbye to the endlessly long slow fadeouts.

To make mix tapes, I would just keep a tape in my stereo player and listen intently to the radio, as soon as I heard the first notes of a song I liked, I would hit record. I would fill up tapes that way, in no particular order, with the "snippets" being the dumb radio hosts who would talk over the intros.

I am continually impressed with your planning skillz from music to wardrobe.

You're telling me that you got a new stereo and didn't get Sirius? They have Classic Rock stations you know!

I totally loved to mix tapes. Back in MY day I had to get an external CD burner. Because it wasn't installed in my computer! Really? What gives?

Jessica,
I did the same thing when I got my first portable little cassette player. I’d lay the mic on the radio speaker and wait for my favorite songs, and shoosh anyone that dared come near. (Note: Moms don’t like being shooshed.) And I HATED when the DJs talked over the songs.

It took me ages to figure out why whenever I’d start a new tape, I’d lose the first 10 seconds of the song I was taping. Eventually I realized that you can’t record over the “leader,” and had to manually wind past it. Brilliant child, I know.

But once we got our first good home stereo (and I mean “good” as in better than our 1960s-era record player), I began making tapes with a vengeance. And after my college years working in radio, I bought the mixing board just as soon as I could gather up enough scratch to pay for it. It was always such a thrill when I could find songs whose beginnings and ends meshed up well together.

Cassie,
Sorry, I’ll never pay for radio, satellite or otherwise. Why pay for someone else to do something I could do better myself?

“Your" day… Sigh… I still wear underwear from “your" day.

I love the ideas behind your Masterpiece! Great work. Me, I throw everything away that hasn't been used in six months. My husband is far from that list!

Cher,
I'm going to have to do a post just on the F.U. tape, including the full song list. Like I always say, great comedy comes from pain. And great music, too.

WOW! I used to create my own tapes years ago! It was lots of fun and I always had them in my car. Unfortunately, though, they stayed in my car even when it was blistering hot outside. It took a while, but I managed to ruin every one of those tapes. Now I only take the CDs that I want to listen to on any given day, and never leave them in the car. I know that they are sturdier than tapes, but I don't want to take any chances.

Judie,
It probably didn’t help that you’re in Arizona either, I bet.

I’ll tell you, I never lost a cassette to the heat, for 2 reasons. Every tape was either in the stereo unit, or in its plastic case. And the plastic case was always in a padded tape case. Best way to get your tape or CD melted is to leave in on your seat or on top of the dash.

It used to be funny, when I worked at the record store, people would bring in these big curvy, melty records or CDs and claim that we sold it to them that way. I’d be like, “Dude, you can’t even fit this thing in the album jacket. No way we sold it like this.”

Just curious... have you ever read the book High Fidelity? You sound just like the main character of that book with your mix tapes. Welcome to the digital age.

Bagger,
I saw the movie they made based on the book… that was the one with John Cusak and Jack Black, right? That totally would have been me, if I’d have been working in an independent record store rather than one in a giant chain. I was running one of the stores he made fun of.

HA! I used to do the same thing as Jessica!

Fiona was my first car with MP3-player capabilities, and I gotta tell you, you'll never go back.

Mrs. Bachelor Girl,
Those primitive mix tapes served their purpose. I was always the kid in the neighborhood that not only knew which group sang what. I carried around my portable cassette player so we could have music no matter what we were doing. So what if I only had 15-minute long tapes to work with? (It wasn’t even a “boombox” kind, it was like a little office steno recorder.)

I’m looking forward to getting out on the road and seeing what the new unit can do. Not much opportunity with my daily 12-minute commute to the subway station. But hey… I learned how to set the clock and turn it on, so that’s a plus! It was killing me this week, not having a dashboard clock.

Darn! I was going to bring up the John Cusack movie, too. Love that movie. Own that movie. The reasoning behind selecting songs fascinates me. I think I owned less than 10 tapes all the years that people were using tapes, and now I own about 10 cds, most of which are holiday-themed. I don't know what's wrong with me. I'm missing the "the band that wrote that is..." gene. I totally admire it in other people. My hubby has that ability with older rock. Amazing.