Today, I went from having zero to write about and wondering what I was going fill tonight's post, to having 5 different things occur to me on the 12-minute drive home.  So that means another glorious Odd Bits posting!

Man of Letters
First, the big news.  The Baltimore Sun ran my letter in their online Readers Response section.  Most of the letters that appear in print start out online, so maybe it will show up tomorrow or Saturday.  You can see it here, if you wish.

This is going to be interesting because this will be my first real experience with posting something controversial online that will be read by those not already predisposed to agree with me, like YOU.  As of this writing, it’s drawn 3 comments… 2 short ones supporting me, and one guy saying that Thomas Jefferson was religious and wrote the Constitution to reflect that.  Of course, I’m planning on countering with some of Jefferson’s numerous quotes stating the need for separation of church and state.  I may even include my all-time favorite Jefferson quote: “Hey, we left this England place because it was bogus.  But if we don’t get some cool rules pronto, we’ll just be bogus too." 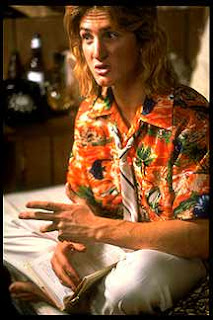 I’m kind of in a quandary because it’s my nature to defend the argument, but in reading other letters and comments, I don’t see other authors getting in there and mixing it up.  I’m going to have to pick my spots, for sure.  I certainly can’t answer every comment the way I do here.

Welcome to the A/V Club, Here’s Your Pocket Protector
I got a new job responsibility this month.  I was tapped to replace the guy that did our A/V setups for large meetings and town halls.

I was not asked to do this; it was assigned to me.  My only recollection of A/V equipment is the geeks from high school that pushed these things around the halls on carts and set them up in classrooms: 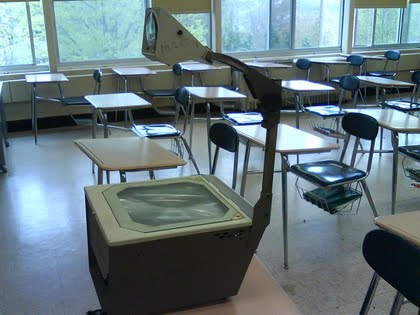 Luckily, the technology has come a long way since then.  Our company cafeteria has been wired up with all kinds of cool meeting-facilitating gizmos.  So my job is hook up a portable touch screen, which controls the podium mic, hand-held and clip-on mics, the conference call operator and a laptop from which to display PowerPoint slides onto a projection screen that drops down out of the ceiling.

It’s all really quite simple, as long as it works.

Ahh, that’s the rub.  When does anything ever just “work?”

I’ll tell you… never.  My trainer’s last day was Wednesday.  We just so happened to have a meeting to prepare on that day, so we had a chance to go through a live drill together before he left for good.  A day earlier, we tested all the equipment.  Everything was fine, except the laptop couldn’t connect to the network.  He troubleshot that, we fiddled with the laptop Wednesday morning, and all was fine.  So then, an hour before the meeting, we hooked everything up again and it was back to not working.

It ended up getting fixed about 10 minutes before showtime, but it did not do anything for my confidence in the system.  And next time, it’ll be ME running around trying to get someone to fix network.  Gah!

I just have to keep telling myself, “at least I’m making some extra money for this!”  And then I remember that I’m actually not.  This is the second new “job” I’ve been assigned in addition to the job I was hired to do, without any change in pay.

But listen, I’m not complaining.  It’s a good job and I’m going to hang onto it until they carry my ass out the door.  You can have my ID Badge when you tear it from my cold, dead fingers!

Geese is the Word
I got goosed at the subway station on the way home tonight.  It happened right there in the parking lot. 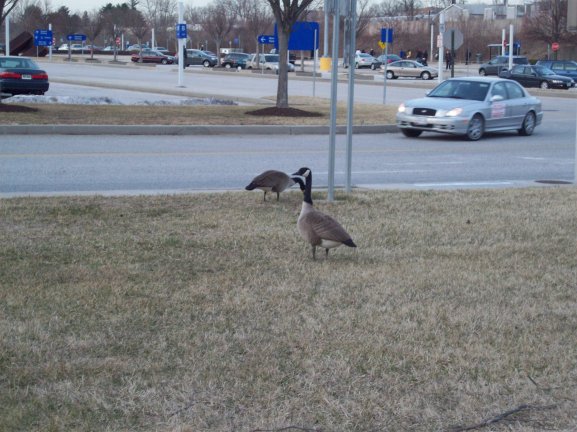 I see these two characters with some regularity and they always crack me up.  I mean, why here?  Why do they always come to the same little patch of grass in an urban subway parking lot?  There are grassy areas throughout the lot, but I always see them here, right were I park.  Are the insects especially good in that patch?

Maybe different areas of grass are as different to geese as wine areas are to us.  Maybe there’s something in the soil right that makes the grubs just a little sweeter.  Or maybe that area is like a rest stop on the goose aerial highway.  Or maybe it’s a sentimental place, like a spot where those two geese first hooked up.

Or maybe they’re just stupid birds that don’t know anywhere else to go. 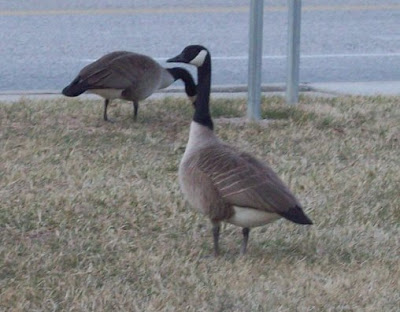 Honk if you love dead grass.

Obviously, this is not a song that you would link with the likes of ME, not after all the shit I talk about organized religion.  But I tell you, I was 8 years old when it came out and it reached straight through the AM car radio and grabbed me by the throat.  It had nothing to do with the lyrics… it was that guitar.

Even as a little kid, the sound of that nasty, greasy, fuzzbox guitar lick just went straight to my “groove” center and took over.  Great hook, great groove, great sound!

Grandfathered In
When I got home tonight, I saw that my dad sent me a new picture.  Remember my cousin Angela, who last week had her first baby?  This little one makes, (by my rough count) Grandpa’s 9th great-grandchild.  I’m always thrilled when he gets to see in a new one.  Grandpa just turned 95 in February and the way he’s going, I’m sure he’s going to see 100, at least. 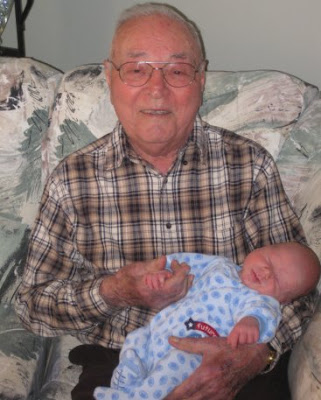 But it won’t be long now before yet another baby will be perched on his lap at dinner, gnawing on biscotti dunked in red wine… Just like I did 40-odd years ago, along with the rest of his 10 grandchildren and 8 other great-grandchildren.  That was always the place of honor when we all got together for dinner.  Unfortunately, due to the age of the Honoree, the only thing they remember is when a new, younger model baby is sitting there instead of them.  Luckily, there are pictures, 8mm movies, videos, smart phone pics and whatever comes next.

So, here we are at the end of the line… from no ideas to a whole fistful fighting for space.  Such are the wonders of the Creative Process.

Maybe I can come up with something more coherent this weekend.
Posted by bluzdude at 8:00 PM