Yesterday, the Supreme Court ruled on an issue that was based right here in Maryland.  They upheld the right of law enforcement to take DNA samples from arrestees, for use in past or current cases.

Writing for the majority, Justice Kennedy likened the process to taking a suspect’s picture or fingerprints.

When this issue first arose in local news, I decided I was for it, and I still am.  The technology has improved, and at this point in time, DNA is just a more accurate form of fingerprinting, which no one even blinks at any more.

The funny thing is that my opinion puts me on the opposite side from where I usually reside.  Justices Ginsburg, Sotomayor, and Kagan were on the dissenting side, agreeing with the ACLU.  I almost always agree with their take on any issue.  But also dissenting was Justice Scalia, with whom I never agree.

What’s even weirder is that I don’t think Justice Thomas has ever decided differently than Scalia.  If they went together this time, it would have tipped the decision the other way.  I bet THAT ruffled some feathers between the two camps.

Anyway, I figure if a DNA sample can link someone to a past but very serious crime, like rape or murder, then have at it.  I’m OK with taking a bad guy off the street.  It’s a non-invasive process, unlike a blood sample.  If you don’t want to be caught up in a DNA case, don’t rape or murder anyone.  You want my DNA?  Fine… I didn’t do shit.

Well, maybe that ONE time, but shhhhhh…  That pumpkin was just going to go to waste anyway.

I’m going with a rare “short” post today.  Later this evening, my nephew Daniel will be graduating from 8th grade.  Yes, another graduation, and he hasn’t even hit high school yet.  Now that I think about it, I should have had a ceremony when I graduated from a 38 to a 40 waist size.

I kid, I kid… I’m always happy for a chance to hang out with my nephews, recently graduated or otherwise. 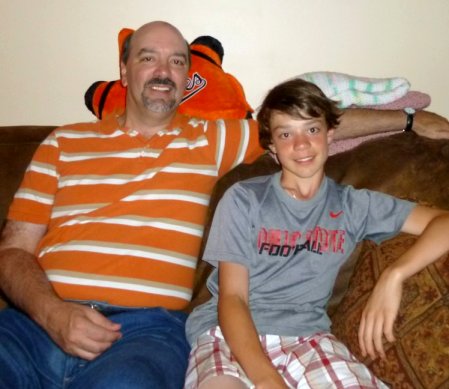 I swear, this kid just came home from the hospital in a blanket.  Now he’s talking to me with bass in his voice.  Where the hell does the time go?
Posted by bluzdude at 12:33 PM

I agree. There should be no reason to use whatever ethical methods available in order to solve crimes. Plus it's a deterent in order prevent them. I can't tell you has many times DNA has made me not kill someone...

Congrats to the little man on graduating!!!

I gotta admit, I'm a little uneasy about the DNA ruling. I guess it's because it's not like a photograph or fingerprint. It's a piece of you. They have your gene sequence. They can tell if you are prone to cancer or addiction or who knows what they'll be able to glean from it in the future. They could clone you.

There's just some kind of Soylent Green/Logan's Run aspect to this that makes me uncomfortable. I'd rather they only were allowed to collect it upon a conviction, I guess.

With an arrest I say no to DNA but if there is a conviction of ANY kind swab away . And talk about time and Bass trust me I feel ya wait til you see the Vanilla Gorilla later this month .....

Well, that and the prospect of the police finding your mannequin parts collection... They might not be as understanding as your friends, here.

I think that’s kind of a long way to go, from seeking convictions, to cloning. I’m pretty sure there are rules on the books right now that ban human cloning. Medical information? OK, that one’s possible, if improbable.

I’d bet before too long, there will be laws passed limiting the use of arrestee-collected DNA, to identifying people and perpetrators. At least, there ought to be, before anyone gets any bright ideas.

Funny, I thought you’d be a Law and Order guy all the way. But then, given how far and wide your DNA has been spread across the land, I can’t say I blame you with this one.

It’s so hard for me to remember that Jake’s actually younger than my nephew, even though he’s about a foot taller.

If it can be done, it WILL be. From medical info to cloning. This is a scary, slippery ruling.
Congratulations to All who are growing up with grace: Daniel, Jacob and Kyrie.

Who’s this “Grace” and why haven’t I met her?

Grace-fully. That's her. She blesses all good kids.

Iiiiiiiiinteresting. I might also have to agree that a conviction is the best starting point. After all of the NYPD stop-and-frisk/quota controversy, I might be a little afraid that we'd start arresting people simply to have their DNA on file.

Another interesting angle… the old “stop and frisk,” or in other words, “Hey, there’s a black guy; let’s see if he did anything wrong…”

I didn’t lay this out before, but the law does say the it has to be an arrestee of a “serious crime.” They’re not trying to take the DNA from jaywalkers… yet.