As mentioned in my very late post on Thursday, Sitcom Kelly and I went to see the Orioles play the Washington Nationals that night.  So stay tuned for a post that has almost nothing to do with baseball.  When I hang out with Sitcom Kelly, I never know what’s in store.

First off, I have to thank my blog sister Misty for hooking me up with tickets.  It seems we’re going to have quite the symbiotic relationship this summer.  She bought a nice ticket package in January, but family events are likely to conspire to keep them from going.  As a most opportunistic ticket buyer, I’m like the little bird that picks the fleas off the rhino’s back.  (Not that I’m comparing Misty to a rhino or anything!)  Suffice to say, this probably won’t be the only time this season that I get my hands on some primo seats, courtesy of Misty’s Laws.

On my way to Camden Yards, I passed a very nice fountain (which is finally in working order).  Now, here’s a question:

How do you make this picture really pop? 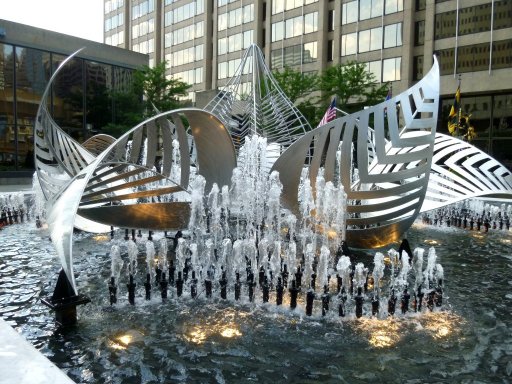 The answer will come at the end of the post.

I met up with Sitcom Kelly at our usual pre-game haunt, a bar called The Bullpen.  Not long after we sat down, one of their people came over and said, “Since you guys are here so often, I’d like to give you this card…” 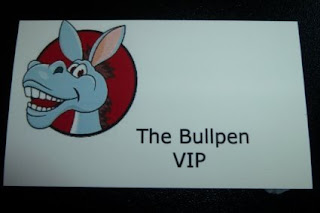 I was thrilled, and told him he made my day.  But then we began wondering if we should really be proud of being recognized as frequent drunks.  But I figure, for 50 cents off every beer, I can live with the indignity.

This time out, I still got my giant bratwurst from the vendors out front, but passed on the cheeseburger, so I had sufficient room to help Sitcom Kelly with her cheese pizza.  (From which she picks off most of the cheese.  Don’t ask.)

This is another symbiotic relationship I have.  I like loads of cheese.  She only likes a little.  So when we share a pizza (or nachos), we don’t have that awkward thing where no one wants to take the cheesiest piece, even though we really want it.

At this place, there always seems to be that one slice of pizza with a big, circular cheese void in it.  Obviously, it’s the perfect piece for Sitcom Kelly, but we were trying to figure out how that happens.  It’s not like they just “missed” putting any cheese there.  We figure it has to come from the crust bubbling up.

The real question is “What happens to the cheese?”  I figure it just kind of slides off to the sides of the bubble.  Sitcom Kelly hypothesized that the bubble bursts, thus throwing off a shower of cheese shrapnel.

We never did reach a conclusion, because we spent the rest of the time laughing at the phrase “cheese shrapnel.”  I decided it would make a good name for a death metal band from Wisconsin.

Sitcom Kelly also killed me with a recent story about how she was in a public restroom with her sister, and thought she was taking the longest pee in history.  But then she realized that it was actually a very brisk leak in the toilet plumbing.  It’s funny how you can’t always tell when you’re done peeing.  (You know, when you’re sitting down.)  I can see how the sound effects can throw you off.

You know, as I get older, I begin to think someone should invent a bathroom light switch soundtrack, so that when you flip it on, the sound of a rushing river or waterfall comes on.  That would really help things along…  But I digress…

We eventually got to the game and our seats were brilliant… first row in the left field club section… one section down from where we sat last time. 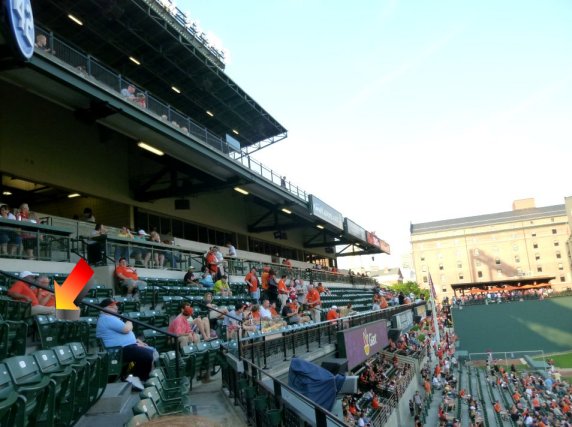 The arrow shows where we sat last time.  You can see the TV camera in front, as well.  (The cameraman rolled it right at the first pitch.) 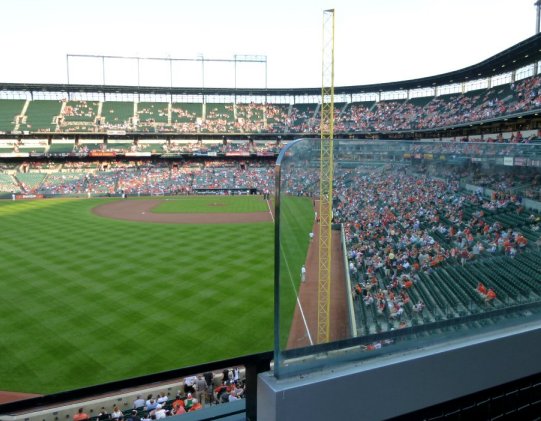 Our view.  The crowd filled in a little later.

I still had to fight with that glass barrier.  When I sat back, I had to look through it to see the batter.  That bugs me.  But it also shows how far I had to go to complain about anything.  I guess my streak of ballgame tribulations is over.  It was hot, but not too hot.  It didn’t rain.  The Orioles won, although in a 2-0 pitcher’s duel, as opposed to the 9-7 home run festival they had the night before.  But still, it was a win for my ballgame experiences.

We had one other funny thing happen.  Sitcom Kelly is just starting to date a new guy.  In fact, he was at the same game, and had asked her to go with him, but she was already committed to go with me.  (Sorry about the CB, dude.)

Anyway, he was sitting in the bowl below us, a couple of sections to the left.  So it wasn't too long before Sitcom Kelly spotted him.  So I leaned over the rail and using my zoomable regular camera, I got his picture.  Then on my camera screen, I zoomed in until we had a very clear picture of the guy.  She then took a cellphone picture of my camera screen, and emailed to him with the caption, “I seeeee you.”  It totally looked like a satellite surveillance photo. 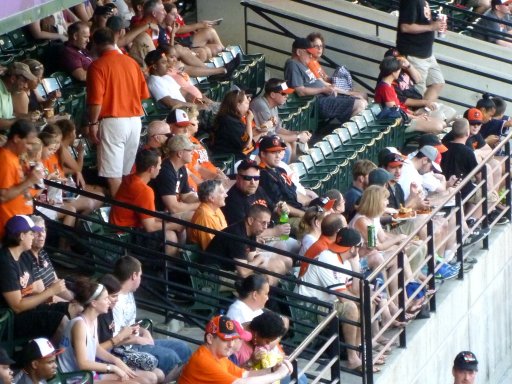 In all fairness, I won’t single the guy out.  But it was hilarious.

As he started feverishly looking around the park, the dude was probably wondering what the hell he was getting himself into.

The game was over quickly, and we were out by 9:30.  On my way back to the subway, I discovered the answer to my earlier question…

How do you make that fountain picture really pop?

Answer: Take it at night. 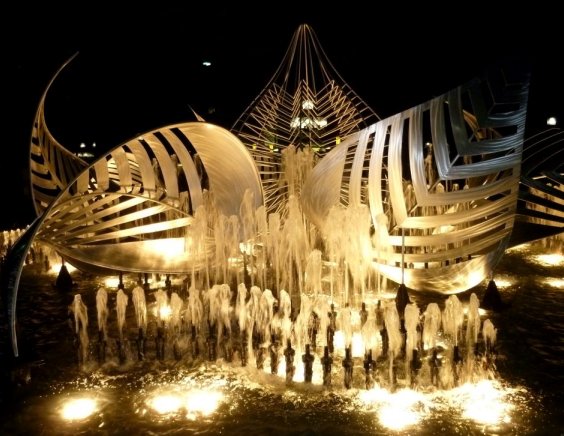 Holy Beltway!
This doesn't have anything to do with anything else in this post, but I feel I need to share it ASAP.

I was heading to my brother’s house, where my parents are visiting from Florida, and as I merged onto the Baltimore Beltway, who’s in the right lane beside me but Batman.

Really, I mean, Batman, riding in the fucking Batmobile, from the TV show.  I nearly shit my shorts.  I immediately regretted not having my camera with me, but then realized I had my iPad (for tweeting the Penguins game), so I managed to squeeze off a shot or two, without ending up in the Gotham City Hospital. 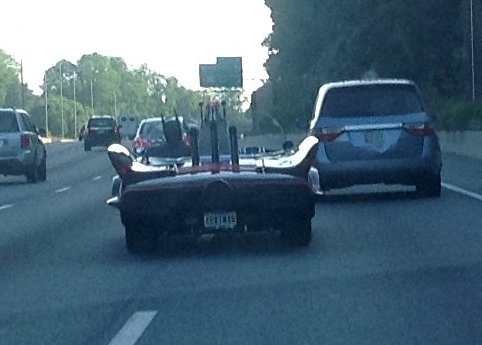 I could see that the driver had the suit on… or at least the headpiece.  You can see the ears sticking up.  Cars were pulling up beside him to stare, and he was waving out the window.  I tried to catch up again, but too many people were lingering.  He eventually got off at the I-795 exit.

I looked it up this morning and it seems that there’s a local guy who tricked out a Lamborghini to make it look like the old TV-series Batmobile.  He acquired it last August and now he takes it around and visits kids in hospitals.

Now I’m waiting for someone to buy a Jokermobile, so the two can do battle for the soul of Charm City.
Posted by bluzdude at 12:09 PM