In my last post, I started treading down the musical memory lane of some old concerts I went to, back in the day.  Despite not gaining a single comment, (to which I ascribe to everyone enjoying the onset of summer), today I’m picking up where I left off.

5/22/85 – George Thorogood, Toledo Sports Arena, “Maverick” tour. ($11.50)  My first of five times I’ve seen Lonesome George.  Johnny Winter was supposed to open, but I heard he backed out after poor results at the box office.  Meanwhile, Thorogood played to about 3000 people as if he were playing Madison Square Garden.

I was up at the front of the stage for this one, to the right side.  That meant I was looking left the whole time, which meant the side-stage speakers were blasting into my right ear all night.  I swear, my ears rung for three solid days.

8/21/85 – Tina Turner/Glenn Frey, Centennial Hall, Toledo, “Breaking the Rules” tour. ($15.00)  I took my mom to this one.  We had a leisurely dinner in town first, because we had all the time in the world… up until I realized I left the tickets at home.  Then the mad dash began!

September, 1985 – AC/DC w/ Yngwie Malmsteen, Toledo Sports Arena, “Fly on the Wall” tour. (comped)  My first time seeing AC/DC… I was so excited.  Went with my brother and a bunch of friends.  It was so hot in that place, my brother almost blacked out.  But what a show!  I was completely worn out afterwards.  An AC/DC show demands active participation.

10/1/85 – Stevie Ray Vaughan/Johnny Copeland, Toledo Masonic Auditorium, “Soul to Soul” tour.  I am so happy I got to see the legend, Stevie Ray, in person, on my 24th birthday.  I’d only seen him via music videos, so I had no idea how amazing his performance would be.  Dude was a real showman, playing behind his back and behind his head.

10/24/85 – John Waite/Cheap Trick, Anderson Arena, BGSU, “No Brakes” tour.  I only went because I was dating someone who idolized Cheap Trick.

That was the last show I saw in the Toledo area.  In March of 1986, I moved to Cleveland, which proved to be a stellar place for concert-going.  They had venues of all kinds, from clubs to arenas, to a stadium.  And because all the record labels had offices there, every act on tour played Cleveland.  In my four years there, I only had to pay to go to two concerts.

4/30/86 – ZZ Top/Jimmy Barnes, Market Square Arena, Indianapolis, IN., “Afterburner” tour. ($15.00, comped)  Funny how my first Cleveland concert was a road trip to Indianapolis.  My fellow store manager, Ron, said the label would hook him up with tickets and passes if we could get to Indy.  (They’d already played Cleveland.)  Eight hours later, when we turned up at the box office, they didn't know what we were talking about.  After a few nervous moments, Ron talked to someone that got us in, but without the backstage passes.

No matter, the show was great once again.  Like last time, they played on the dashboard of the Eliminator car, which halfway through the show, evolved into a spaceship car, like on the album cover art.  It was cool as hell. 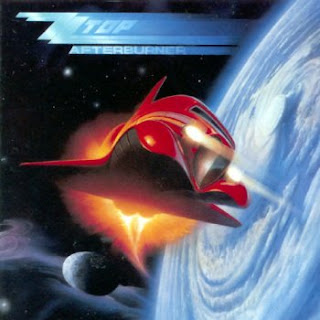 5/27/86 – 38 Special, Blossom Music Center. (comped)  This was my first show at Blossom, which is a big outdoor venue, with a covered pavilion and then open lawn seating.

10/9/86 – AC/DC w/ Loudness, Blossom Music Center, “Who Made Who” tour.  ($14.00, comped)  First of all, the opening act, Loudness, was a Japanese metal band.  They were pretty good, but it was just funny to me, when the singer said at the end of the show, “We are Roudness!  AC/DC come out and give you good time!”
He was right, because AC/DC started with the best show opening I ever saw.  The stage had a series of ramps angled down from a riser behind the drummer.  The first song was “Who Made Who,” which starts out kind of subdued, with only the drummer, bass and rhythm guitar playing.  At an AC/DC show, everyone anxiously awaits Angus Young’s appearance.  So all of a sudden, a huge cheer went up when he appeared on the right side ramp.

But wait, who’s that on the left?  It was another Angus.  I was like, “WTF?”  Next thing you know, there are six Anguses (Angi?) lining the ramps, all stomping and bobbing in unison. I didn't know at the time that the music video for “Who Made Who” featured a crowd of Angus clones.

But then, when it was time for the lead guitar part to begin, it seemed to bust right through all the chaos.  Up from a smoke-filled glass tube, behind the drum kit, came our boy Angus, and as the other Angus clones scattered, he came scissor-kicking his way down the ramps and onto the stage.  As usual, he never stopped for the rest of the night. 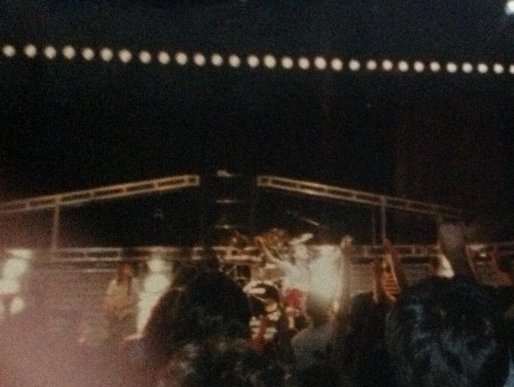 This was the stage setup, with the ramps.  I had 10th row seats, so I tried to get some pictures.  But with a non-zooming 1980s-era camera, it still looked like I was sitting in the middle of the hall.

9/18/86 – John Fogerty/Bonnie Raitt, Blossom Music Center, “Eye of the Zombie” tour. ($15.00, comped, backstage passes)  This was a great double-bill.  Bonnie Raitt hadn't broken out big yet, but she would with her next album.  But she played some wicked blues on the slide guitar.  She was a real hoot to meet… I wrote about it here.

Fogerty was only playing his solo stuff, because he still had a beef with his former label chief over the rights to the CCR material.  (It would be years before Bob Dylan talked him into playing the CCR stuff, by saying, “If you don’t start playing it, everyone is going to think that Tina Turner sang “Proud Mary.”)

11/1/86 – Sam Kinison, Hanna Theater, Cleveland, “Louder Than Hell” tour. ($12.50, comped)  I don’t think I ever laughed this hard in public, in my entire life.  Bad Sam absolutely killed!  I got to meet Sam at an in-store appearance, earlier that afternoon.

12/11/86 – Cyndi Lauper/Eddie Money, Richfield Coliseum, “True Colors” tour. ($15.00, comped)  I know, you wouldn't peg me for a Cyndi Lauper fan, but I always liked her.  But to me, Eddie Money stole the show when he busted out “Shakin” as his encore, with that big opening drum beat pounding out through the darkness before the lights came up.

4/23/87 – Eric Clapton/Robert Cray, Richfield Coliseum, “August” tour. ($17.50, comped)  Great show… Phil Collins played drums for Clapton… no singing, just played the drums.  I never really understood Eric Clapton until this night.  Most of the songs of his that I knew and liked were his top 40-ish hits, like Lay Down Sally and Cocaine.  Everything changes with his second song, Cream’s “White Room.”  When it came time for the big solo, he kind of leaned back, squinted his eyes, and just tore that shit up!  I felt like that dude in the Maxell ad, with his scarf flying backward from the sound.  It was that moment that I truly understood what Clapton was all about.

7/8/87 – Jeff Healey Band, Peabody’s Down Under, Cleveland, “See the Light” tour. (comped)  Jeff Healey was that blind blues guitarist who played sitting down, with the guitar sitting face-up on his lap, and his fingers pointing down.  If you don’t recognize the music, you may remember him as the guy in the Patrick Swayze movie “Roadhouse,” who plays the blind guitarist at the Double Deuce.  (The role was based on Healey himself, who the writer saw playing in a bar in Canada.)

This was one show where I didn't worry about bringing a camera, because I knew the flash wouldn't bother him. 8/23/87 – Tina Turner/Wang Chung, Merriwether Post Pavilion, Baltimore, “Foreign Affair” tour.  Saw this show while visiting my parents in Baltimore.  Then on 9/9/87, I saw the same show at Blossom.  I tell you, Tina Turner is a force of nature and an incredible performer at her age, or ANY age, really.

Director’s DVD Commentary: Tomorrow, I’m heading for the farmland of NW Ohio and that last bastion of guy-hood that is my buddy John’s garage.  My plan is to continue to post from there, so I can share our exploits and carnivorous adventures along the way.  I’ll probably pick up the concert trail again in a couple of weeks.
Posted by bluzdude at 7:16 PM

Those are some pretty awesome concerts!!! I'm a bit jealous!!!!

I saw AC/DC five different times, and they were incredible each time. Sure wish they'd come to Baltimore. They were in DC a couple years back, but that was before my nephew started liking them. I didn't think I'd have anyone to go with.

Eternal Thunderdame Yes. That Centennial Tina Turner concert still rings and rocks in my ears. We were way up near the ceiling, I think, but Tina was right there, voice and presence resounding, bouncing off all around the Hall.
Bon Voyage! Have fun in John's Garage. You guys have always had the garage. How come you never had a Band???

I was so pissed, because we had all the time in the world to eat and mosey out to the show, and then we had to make that mad dash. Still, it was a great show.

"Are you ready for Tina?"

YES INDEED! And "that mad dash" gave the evening a little extra bounce. After all, THAT is what we most remember.