Pinky and I were watching an Orioles game this weekend, when she noticed how often baseball players spit.  (She didn't like it… at all.)  As she was pointing out the giant wad in slugger Chris Davis’s cheek, and wondering why anyone would do that, I dropped the bomb.

“Did you know that I used to chew tobacco?”

Yep, it’s true.  Now I haven’t done it in more than 30 years, but there was a time when I did it regularly.

Now, how does a nice suburban boy end up with a chaw in his jaw?  Road trip to Georgia, that’s how.

On spring break during after my freshman year in college, Rik and I flew down to visit our buddy Billy G in Valdosta, Georgia.  Now, Bill was a New Jersey boy, so we weren't picking up any local “flavor” from him.  But the kid that lived next door?  Dude was redneck through and through.  While we were down there, chillin’ by the pool and drinking beer, the guy got us to try some of his chewing tobacco.

First off, let me mention that there are two basic kinds of chew.  One is “dip” style; it’s the kind that comes in the round little cans that leave a telltale ring on the user’s back pocket.  The tobacco looks like coffee grounds and the idea is to take a pinch or two and put in inside your lower lip.  They also have a “Rough Cut” in which the grains are longer, for greater ease of removal. 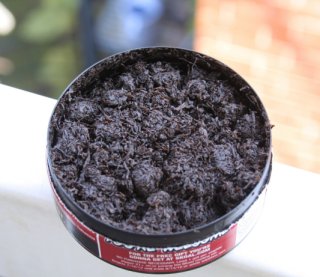 The other kind is “loose-leaf,” which looks kind of like spinach leaves.  That’s the stuff that gets packed into your cheek, in a giant wad.  With both kinds, the idea is to suck out the flavor, then spit, either on the ground or in a spit cup.  You don’t dare swallow the juice, or heaven forbid, the tobacco, or you’ll be visiting Hurl City right quick.

The neighbor started us out with some Skoal, which is a dip.  What no one ever told me about chewing tobacco was the enormous rush you get while doing it.  What’s happening is that you’re absorbing the nicotine right through the lining of your gums.  They never mentioned that on the TV commercials.

The Skoal had a nice wintergreen taste, and was pretty accessible to beginners.  “Copenhagen” is a stronger dip, that tastes more like shoe polish.  I wasn’t crazy about that stuff.  Bill’s neighbor told us that some good ol’ boys down there soaked their Copenhagen in Jack Daniels before dipping.  I think that explains why they talk so slowly down south.

Anyway, while the head rush was nice, Skoal could be kind of a problem.  The grains tended to escape from the main mass in the lip, and wander around the mouth, usually lodging right there in the front of your grill.  Then we wonder why all the chicks are gone…

Loose-leaf was a lot easier to deal with.  Once you pack it into your cheek, it stays put.  While I may have felt like The Marlboro Man, I looked more like Marlon Brando in “The Godfather.”

So it was kind of funny… This was my first trip away from home on my own.  When I left, my folks were worried that I’d come back with some kind of illicit drug habit.  When I came home chewing tobacco, I think they’d have preferred me hooked on smack.
The first thing I did was take a beer can from my beer can collection (an Iron City “Steelers” can) and cut the top off, to use as my spit cup.  Obviously, I didn't chew in the house, but The Barn wasn't off-limits.  I think everyone out in The Barn gave it a try at least once, even the girls.

I moved off the dip pretty quickly; it was just too messy, and I wasn't down with having green shit in my teeth.  I soon found a couple brands of loose-leaf that I liked: Workhorse and Beechnut Wintergreen. 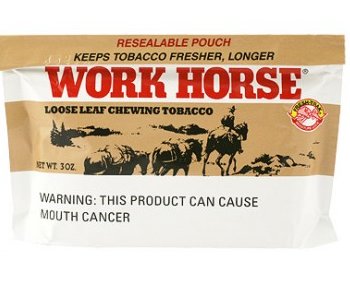 There was no cancer warning, back in my day, because we were real men.

I probably chewed tobacco fairly regularly for a year or two, before the novelty wore off.  Plus, I was pretty certain it was poon repellent.  No one in Northern Ohio was particularly impressed by the rugged manliness reflected in the habit.

I think the reason I took to it was that it was different.  I don’t think I ever saw anyone in our area chewing tobacco, and I was all for being unique.  I was very involved with the idea of going against the grain and doing one’s own thing.

After I got tired of the chew, another friend started smoking a pipe.  Not realizing that a 22-year old kid smoking a pipe looks utterly ridiculous, I dove in with both feet anyway.  Regardless of how I looked, it made me feel older, as I then went out trolling for babes with daddy issues.

What I loved about the pipe was that it smelled so damned good.  And there were a myriad of flavors you could get.  But the down side was the inevitable case of morning-after ass-mouth.  The smoke could really roach out your tongue.

I didn't stick with the pipe any longer than I did the chew.  It was basically just something else that I thought was unique.  And as a compulsive “fiddler,” it gave me something to fiddle around with when I was hanging out with my buds.  I still have the pipes now, but I haven’t used them in probably 25 years.

Like I said, I haven’t partaken in either of these two vices in ages, but I still know how.  And all this time, I’ve been dying for a situation to come up when someone is chewing tobacco and making some kind of remark about how not everyone can handle it, so I could grab it from him, take a chew and be all, “Ain’t no thang…”

Your great grandfather kept his spittoon in the dining room, behind his chair. You don't have to chew or swallow to be sick of that shit.

Any time I see a guy with a wad of dip in his lip, I wonder how he can ever find any girl to kiss him. Ew. Glad you kicked that habit!

Matt used to chew! I told him that if he ever wanted a future with me he'd have to either quit or brush his teeth 100 times before I'd ever kiss him.

Took him one time lying to me to find out that I'm not one who takes lightly to it. Totally told him to swallow it.

Now the thought of it makes him ill.

I had a roommate in college who chewed. Spit cups precariously placed all over the room like land mines. The room reeked of Sanka coffee (mine), wintergreen (his), and desperation (both of us).

I came to the same conclusion. I had a hard enough time finding girls to kiss just from being goofy-looking.

At least he chose you over tobacco…

“Listen, Buster, you choose… me or chew!”

I tried to be very careful with my spit can. I’d use it, and then empty it immediately after. I certainly never used regular cups, lest someone make that oft-feared error and reach for a swig out of the wrong cup.

I know a guy who still does this and spits it into an empty Fiji water bottle. I still to this day cannot drink that water.