We had some big doin’s this weekend.  My parents, my sister and her husband were in town for my nephew Daniel’s 8th grade graduation on Tuesday.  There were two Penguins playoff games during that time, so when we weren't out eating someplace, we had a couple of opportunities to concentrate our Penguin Mojo powers. 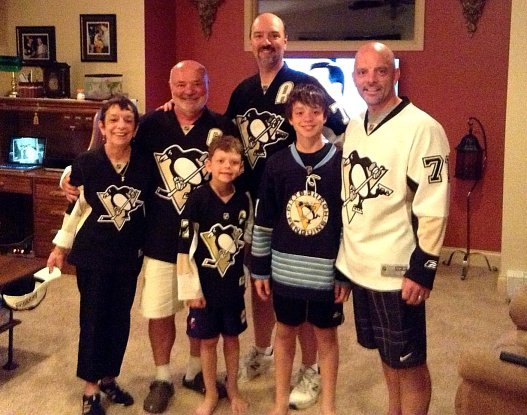 With the Penguins losing both games, we realized our Penguins Mojo is better off diffused.

Each night, I came home from our get-together feeling really good.  We all had so much fun hanging out together.  And I know I always have a blast when I get to hang out with my nephews.  Unclehood suits me.  I hope I’m doing a good job.  The boys always seem happy to see me, or at least not terribly annoyed.

When I was lying in bed Tuesday night, I began thinking about the relationships I had with MY uncles when I was that age.  What occurred to me was that I pretty much hit the Uncle Jackpot.  My uncles were unbelievable, with each having his own special gifts.

Uncle Joe – My mom’s brother.  Uncle Joe was the wild card.  All we ever did when he was around was laugh.  Much like my Grandpa, he had jokes and stories that made us snort our ice cream dozens of times.  He had a kind of enthusiasm for life that lit up everything around him, and always had fun stuff for us to do and places to go; in his sports car if we were lucky.  He used to say, “Ya gotta have the best toys, or it’s just not worth playing.”

Hanging with Uncle Joe was like life at 78 rpm.

Uncle Gordon – My mom’s brother-in-law.  Uncle Gordon is the smartest guy in any room he walks into.  A psychology professor, he was building his own computers back in the 70s.  And he’s British, with a deep, rumbling voice, which automatically makes him sound brilliant to Americans.  He could make Larry the Cable Guy’s material sound like a NASA schematic.

He was also very kind, and generous with his time.  He taught my brother and I how to play chess, when we were kids.  And like my dad, he never let us win, ever.  But he would give us odds.  I remember we’d play and he’d get me all boxed into a corner, with no hope for escape, and then offer to turn the board around and play my men.  I’d jump at the chance, sure I could finally win a game, but then in no time, he’d have me all boxed in again.  (I was not exactly a prodigy, so in retrospect, it probably wasn't THAT hard of a feat.  I but I was still pretty impressed.)

Uncle Ange – My dad’s brother-in-law.  Uncle Ange was an immense, broad-shouldered giant of a man who looked like an extra from The Sopranos.  But he was really just a big teddy bear; always so happy and easy-going with everyone and full of love for his family.  He’d play ball with us, or talk Pittsburgh sports, an always make sure we had enough to eat and drink.

Ange: Did you get enough spaghetti?  How about another sausage?  Here, have a cookie.  Hey, your wine glass is empty, pass it over and I’ll fill it up…

So as I was considering all this Tuesday night, I realized that I have some really big shoes to fill with this Uncle business, because mine were larger than life.  But I think I’m on the right track.  Whether I realized it or not, I've been taking some of the qualities my uncles had and repackaging them for my nephews.

Like Uncle Joe, I try to be a “fun” uncle and keep things happy and loose with a lot of joshing and teasing and stories about their father’s youthful exploits.  (Age-appropriately, of course.)  I try to get them Christmas and birthday presents that I might have liked at their age.  (Pittsburgh jerseys and video games, not socks or sweaters!)  In fact, along with the cash I tucked into Daniel’s Graduation Day card, I left specific instructions that it must be spent frivolously, or else I’d be most displeased.

(I love that I get to use big words with the boy.  Although come to think of it, he probably knew what “frivolous” meant when he was 6.)

Like Uncle Gordon, I try to teach them some things.  I may not be an expert at chess, but I know my 80s rock music, like nobody’s business.  Daniel and I can talk music, movies and sports for hours.  I try to teach him what’s good and what’s crap, and how to deconstruct a song, instrument by instrument.  And more than just talk, I try to listen.  He knows I understand the trials and tribulations of being the older brother.  (“Whatever happens, it’s your fault.”)

Like Uncle Ange, they know they I’m always on their side and will be there for them.  I make sure they know I love them and always will.  Since the day they could walk, they walk their ass over to me when I come in the door, for the distribution of hugs.  I don’t see that changing, I don’t care how old they get.  I tell (Daniel’s 7-year old brother) Sammy all the time, “No matter how big you get, your Uncle Bluz still needs hugs.”

I’m not perfect at all this, not by a long shot.  I still swear too much, even though I’ve cut way down, and I toss out the occasional inappropriate joke or reference.  Maybe it’s all just part of the role… to be the jester, the rascally bachelor uncle.  (In fact, if I don’t start laying off the pizza and beer, soon I won’t be Uncle Bluz, I’ll be “Uncle Buck.”)

Maybe I’d completely bomb in the role if they were different kids, but these two make it so easy on me.  Both are happy and thoughtful, whip-smart and adept at making conversation.  Hell, Daniel can make conversation with a rocking chair.  The boy can talk the ears off a brass monkey.  Poor Sam can’t get a word in edgewise, sometimes, but he’ll come into his own before too long.  With a seven-year age gap, Daniel will be off doing teenager things and Sam will finally be able to get in more than a sentence or two.

All in all, I made out pretty damned well in the “nephew” department.

I hope one day they’ll look back at the time spent with their uncle just as fondly as I do with mine
Posted by bluzdude at 8:46 PM

Beautiful tribute to Uncles, Nephews means take a bow yourself. Remember Uncle Joe's Batman costumes for you and Ed which you carefully kept in your drawer while going back to your kitchen towel capes.
Bachelor Uncles are, indeed, the GOODS.

Hey Uncle Bluz . . . my wine glass is empty. Can you go ahead and fill that up for me? Thanks.

You thought that was a joke about Uncle Ange?

OK, yeah, it kind of is, but not by much. Everyone gets some wine in an Italian family.

I hope this didn’t make you snort your Sharpie. You could be marked for life. Ha!

Oh, that’s where we got the Batman costumes? I loved those. If I wasn’t wearing them, it was because I didn’t want to mess them up. I’d need them to be clean if the Joker showed up in the back yard. (It would have to be in the back yard, because I wasn’t allowed to cross the street.)

Bluz Sister has the album that holds the photo of me and Ed in our Batman capes and masks. I gotta get her to scan that for me. Everyone here would die from the cute.

Of course I will. I just hope you’re not too busy…
Misty: Your honor, I need a short recess to consult with my colleague.” [pooooour!]

I can crop him out... Batmen share the screen with no one.

It's so nice to be close to your family members. Especially when they are all really cool peeps!!

Yeah, I made out pretty well in the 'family' department.

We did OK in the Son department too. Didn't even apply or try hard.

I've got three nieces, which is great. I mean they are great. But it's just different. I never had sisters. And it's harder to connect with them as they grow. Much easier to relate to the world of being a teenage boy than the drama of being a teenage girl.

I'm still the fun uncle, but it's different.

Have one nephew in Texas, but I hardly ever see him. I'm the "Facebook uncle" with him.

I agree that it’s different with nieces, eventually. When they’re young, you just need to pay attention to them, play what they want to play, and give lots of hugs. But then you have to wean off of that, lest you become a whole different kind of uncle.

But yeah, with the boys, we have a number of default topics we can always talk about, like sports, music, and eventually babes.