Cup Mojo and Other Miscellanea

Well, another NHL regular season has been put to rest, with the Stanley Cup playoffs starting tomorrow.  As you may know, to me, the regular season is nothing but an opportunity for me to gain data on which Penguins game jerseys to wear for the playoffs.

For each game (most of the time) I select a game jersey and track the results.  Over 82 games, it comes to a pretty good bit of data.  And each year, I run down the results for you here, because it is just that fascinating.  (Snork!)  Hey, if I’m going to put this much effort into tracking, or anything, I expect to get a blog post out of it.

I didn’t obtain any new hockey jerseys this year, (most of my jersey acquisition went into baseball jerseys), so you’ll see the same options I’ve been rolling out.

This year’s clear winner was the black Brooks Orpik #44, which I wore for most home games. 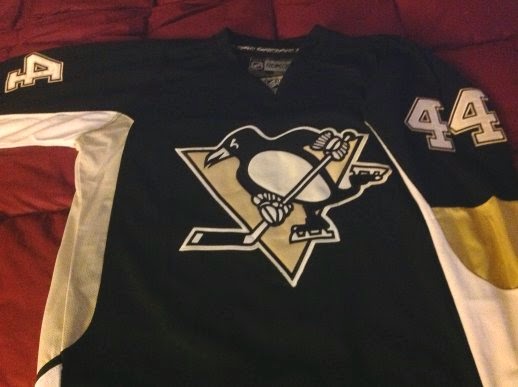 Next best was the black Evgeni Malkin #71. 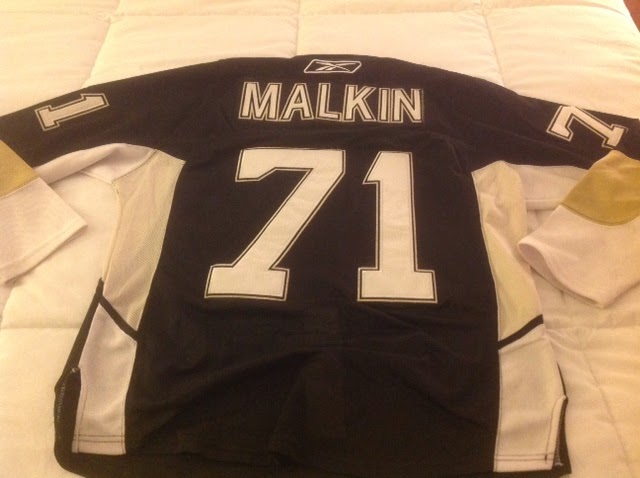 I didn’t wear it as much because A) the Orpik jersey was hot and B) Geno was hurt a lot.  I tend not to wear the jersey of a player who’s out of the lineup.  Most of the wins here came from when Orpik was hurt.

Next was my go-to jersey for away games, the white Sidney Crosby #87. 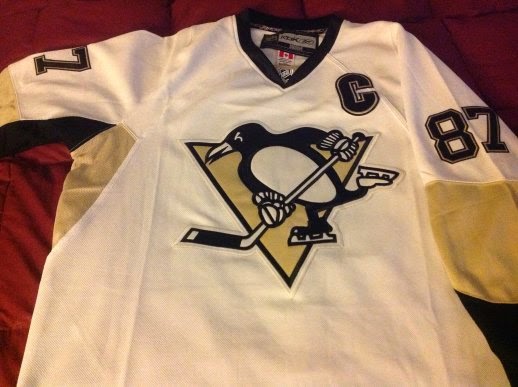 The white Sid was streaky, but still piled up a lot of losses.  When I didn’t go with this one, I went with my white James Neal #18. 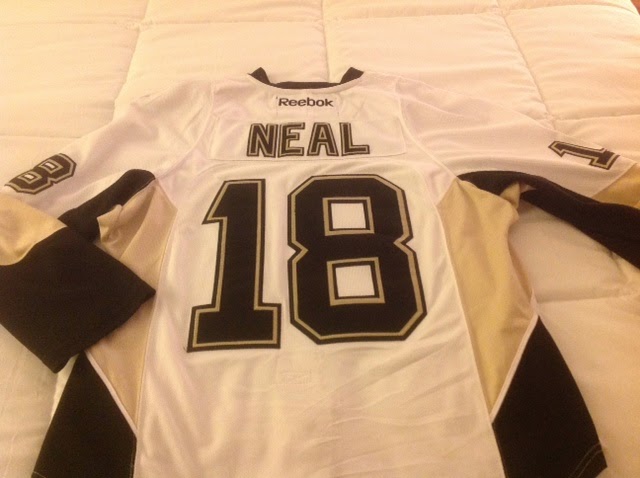 Because neither of those two white jerseys was very reliable, I went with a number of alternatives for away games, usually in powder blue.  The blue #87 from the first Winter Classic (vs Buffalo) went 1-1.  I had better luck with my blue “Pensblog” jersey, which went 3-0.  Other times, I wore a white Mario #66, with the 80s-90s Corporate Pigeon logo, which went 2-0.

There were occasions where I didn’t wear any jersey at all, usually because I was otherwise occupied, often with a certain person who was moving into and then out of my apartment.  When I wore no jersey, the Pens went 3-6, .333.  This clearly proves that the Pens have a better shot at winning when I’m working the jersey mojo.

So with the playoffs looming, it looks like I’ll be working the black 44 and white 87 most often, and bringing in the occasional Mario jersey off the bench, when an extra bump is needed.

The apartment is coming along nicely; I’ve been busy assembling new parts and pieces to classy-up the old man-cave.  I keep telling myself I have all kinds of time to work with, but the other part of me keeps whining, “But I want is all done NOW…”  I swear, I’m keeping Amazon in business singlehandedly.

And I know I said I wouldn’t mention it again, but there is still time to help some people out by donating to March of Dimes.  You can read about the lengths I’ve come to throw active support behind this organization, and find a link to donate, in this post here.  The link for donations will be open until 5/1.

Lastly, let me just remind you that you can still vote on whether I should shave my head.  The poll is open until Thursday at 6:00 PM, and can be found on the right hand margin, just under my Twitter information and recent tweets.

I’m not saying the results are legally binding; I’m just seeking outside opinion.  It may not be as important as Game Jersey Mojo, but you know how I am about gathering data…
Posted by bluzdude at 6:32 PM

You should totally shave your head!!!

I'll at one more vote to the total.

I've been wanting to comment on your previous post for a while but can't seem to find the time. (This damn A to Z challenge is exhausting!) As for the Penguins, it looks like Sid the Kid will win another Hart trophy this year. I'm by no means a Crosby fan but it's good for the game when #87 is healthy for a full year. I feel bad for Columbus though. They never, ever make the playoffs and they draw Pittsburgh in round one? Yikes! I smell a sweep unless Bobrovsky steals a game or two. Which is possible, so maybe you'll need that jersey mojo after all.

p.s. I remember Snoop sporting a Penguins jersey back in the day. I think he switched allegiance to the Ducks recently (probably once they ditched those dreadful Disney sweaters.)

How will a Bald Head affect your game jersey MOJO ??????

Audrey wore the lucky Crosby tee today that was worn by Luca WHEN WE WON THE CUP. Just saying.

I just hope they don’t get caught looking past these guys. You never know when you’re going to run into a buzzsaw. But not only are the Jackets likely to get their butts handed to them, they’re also likely to be a minority in their own rink. Pens fans will be all over their barn.

Sid has been unreal, all year. He draws the opponent’s top defenders every game, leads the team in faceoff wins, makes all his linemates better, and even spends some time on the penalty kill. Contrast that with his rival, Ovechkin… who scored 50 goals, but still posted a plus/minus in the minus-30s. How much of a defensive liability must one be to pull that off?

As for Mr. Dogg, he wore the old Pens jersey back when he was still relevant, so we get to keep the “honor” of referring to it as the “Snoop Jersey.”

If I decide not to shave, that will be my excuse… I can’t change the mojo during the playoffs.

No way on that one… there has to be some form of facial hair. I’m not comfortable with having that much face hanging out in public. It’s not as if I look like Hugh Jackman under there.

That’s very strong mojo. Now if they win tonight, she has to wear it for every game during the playoff run. (I know… easier said than done.)

I don't think you're keeping Amazon open single-handidly. After all, I am putting in a great effort too.

Must be a Birthday Twin thing… or just that Libras are feeling the need to shop. Jeff Bezos owes us some coupons or something.