Two things to cover today, so this is kind of a mixed bag post.

As I said in my last post, my buddy, the VP of Hell No is in town for a visit.  Also, so are the Pittsburgh Pirates, to play the Orioles.  I have tickets for both games, on Tuesday and Wednesday.  And you know what else is in town these two days?  A freakin' monsoon!

Seems I can’t win for losing anymore.  Anyway, I was discussing the situation with Sitcom Kelly, and this email train emerged.

Sitcom Kelly: Yeah, Wednesday is thunder storms.   If the game is still played, at least we’ll be under the cover.

Bluzdude: Yeah, it’ll be an excuse to hang out downtown and drink beer.

BD: I’m not sure what the effect will be… will it keep the crowds away, or just drive them inside The Bullpen, so we can’t get a seat?

(The Bullpen is the bar we always go to before an O’s game; so much so that in 2012, they gave us both VIP cards.)

SK: We’ll just flash our VIP cards and the “sea” will part.

BD: I need to get a flip-style badge wallet for it, like the FBI has…

BD: “VIP Division is taking custody of this table… and your nachos.  VIP Sitcom, please show these clowns the door…”

BD: [tapping earpiece] I just got word that there’s a better table up front, occupied by 2 non-VIPs.  We’re moving to commandeer… over.

My prediction is that they’ll try to get four and a half innings in tonight, to make it a legal game, and Wednesday’s game will be postponed.  Both teams are off on Thursday, so they could make it up then.  The VP and I are meeting Sitcom Kelly and her Sitcom Sister for the game on Wednesday.  For tonight’s game, I’m going with my friend Jenn.  If the worst thing that happens is that I spend a couple of hours with her drinking beer and eating bar food, it will still be a night well spent.

Director’s DVD Commentary: This post is being written before Tuesday’s game, but posted afterward.  So please forgive any back and forth in time frame.

Late addition: They called the game off by 5:30, just after Jenn and I hit the area.  Then we found that The Bullpen was closed, so we walked down to the local Hooters, on the Inner Harbor.  (Jenn loves the wings there.)  So we hung out, drank beer, ate wings (and a fish sandwich for me), and shot the breeze.  It was definitely a night well spent. 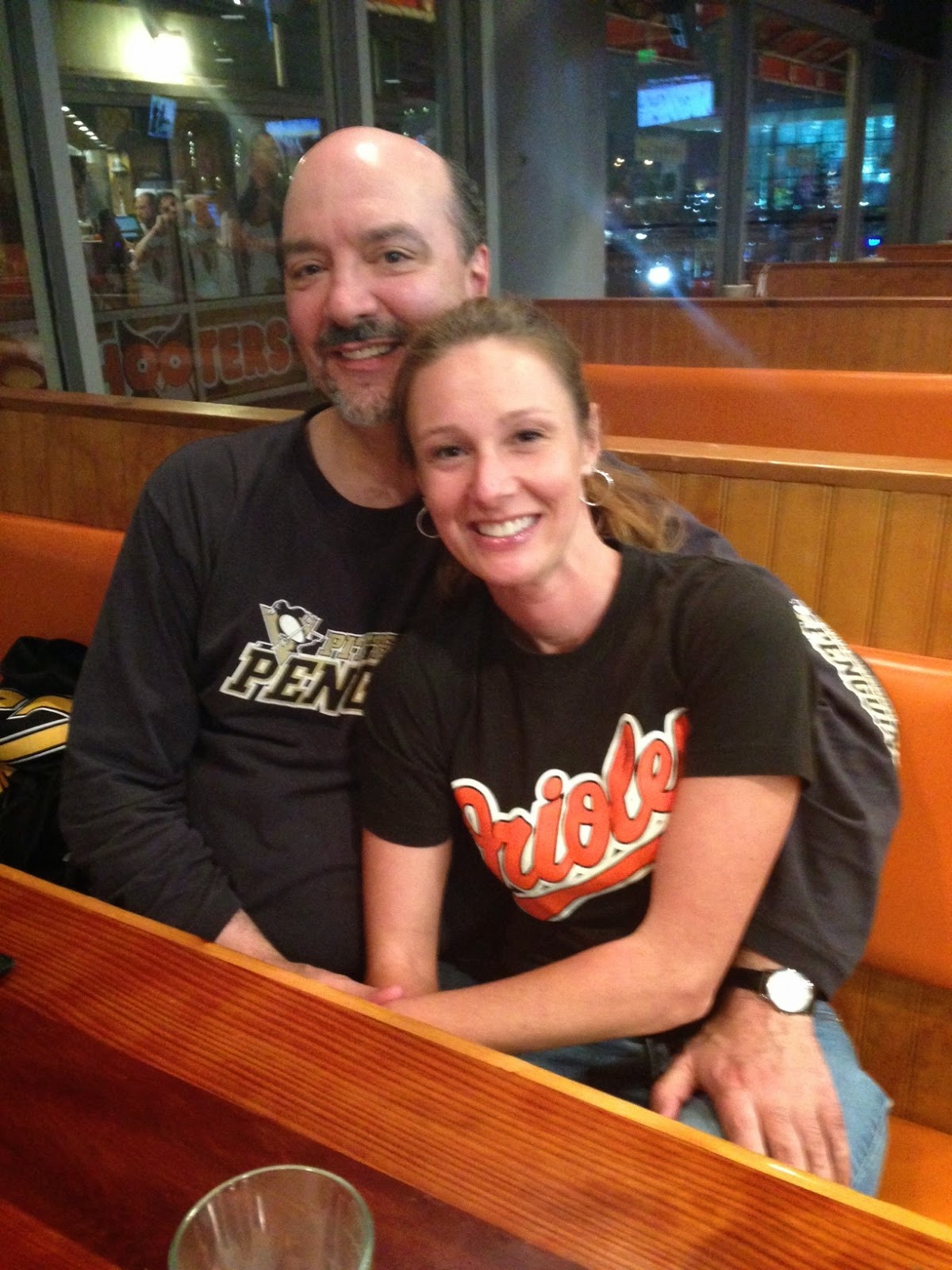 As for tonight, it’s supposed to rain all day and into the night.  I expect they’ll cancel tonight’s game as well, so they’ll probably play two tomorrow.  I’ll see if I can get the afternoon off.

N.B. A-hole
By now, everyone has heard about the ridiculous comments from the owner of basketball’s LA Clippers.  Today, the NBA Commissioner came down hard on him, fining him 2.5 mil and basically booting him from any interactions with the team or front office, for life.  They are pressuring him to sell out, as well.

Right, what a punishment… “Here, take this massive payoff to go away.”  The team could reportedly sell for over a billion smackeroos.

You have to be impressed by how thoroughly that “girlfriend” really ratfucked the guy.  She totally brought down his whole castle right on his head.  Not that I have any sympathy for either of them.  I’m just watching as an amused spectator.

One thing I spectated in the paper this morning was a letter to the editor in the Baltimore Sun.  I don’t know that it was in support of the owner, but the writer was using the chance to take a shot at liberals and the “liberal media.”  Here’s what he said:

“Los Angeles Clippers owner Donald Sterling may be a lot of things, probably negative to most people, but first and foremost he is a citizen of the United States.  If a person is engaged in an intimate or personal conversation, he would presume that it is one of a private nature.  I guess the liberal media doesn’t respect First Amendment rights!  They have taken to this story like lions to the Christians!  The left wing often explains freedom of speech as “protection of words that most find abhorrent”; where are they on this one?  It looks like George Orwell was right, the “thought police” are coming for you!”

Once again, some white guy on the right completely misses the point of the First Amendment.  I know I’ve covered it before, but it bears repeating.  The First Amendment allows you to speak your piece without prior restraint.  It doesn’t insulate you from bearing the consequences of said “spoken piece.”  If you say something stupid, you take responsibility for it.  And if you say something so irretrievably racist, sexist, and just plain inhuman, and everyone kicks you in the ass for it, that’s on you for being such a freakin’ numbskull.

It’s not a matter of Thought Police, or a so-called liberal media, (How liberal was the media when they were busy crucifying Bill Clinton for not being able to keep his Slick Willy in his pants?) it’s a matter of responsibility for one’s own actions.  Isn’t that what the conservatives always trumpet when they’re locking up pot smokers and protesters?

I also see how the writer is using loaded imagery of the lions pursuing the Christians, trying to play the “persecution” card.  The religious right loves to claim persecution whenever a bunch of people (like me) don’t want them to dominate public events with their particular flavor of religion.  One person claiming their right not to be spiritually steamrolled by another is not exactly “persecution.”

Eventually, I’m sure someone is going to go after the gold-digger who guided the conversation, recorded it and sent it to the press.  I’m no expert, but I don’t think you can record someone without their knowledge or a warrant.  So she could be in deep doo-doo as well.  Not sure what he can sue her for… probably nothing that he didn’t give her in the first place.  It won’t be a replacement for his NBA team, that’s for sure.

I wouldn’t give her much of a chance to land another rich old man, not after the rogering she gave Sterling.  I’m pretty sure word will get around the golf course.
Posted by bluzdude at 11:51 AM

Great picture! Though sorry about all the rain.

And I agree on the first amendment. People are so insanely confused over it. You have the right to say it, yes, but you also have to deal with the backlash over your own stupid comments.

First 1st amendment fusillade is no surprise. Nor is the stupidity. You are absolutely right about responsibility. Now we can see first hand how a bully handles THAT!

Well, we made do. We don’t usually get to spend more than a lunch hour together, so it was nice to be able to take a “deep dive.”

I read today that Sterling says he’s been fighting cancer. Not to be unsympathetic, but that figures. When a bully gets called on being a bully, the next move is to play the sympathy card. Not sure that’s going to spare him from having to sell the team.

"the rogering she gave Sterling"
I see what you did there. (Please tell me you're a Mad Men fan? I've been waiting for someone to say this.)

Welcome, Rosa. Any friend of Misty’s is a friend of mine! Thanks for commenting.

Unfortunately, and it pains me greatly to say this, I’m not nearly as clever as you’re giving me credit for. I’ve never seen Mad Men, so any connection is purely coincidental. It’s possible I’ve heard something somewhere, but I think the last time I heard the term “rogering,” it was on the West Wing, as President Bartlett told a prospective voter, “You’re right, I gave you a right good rogering on that one.” That’s what I was thinking when I wrote the line.

Next week on “Darwinfish: Behind the Scenes,” what I was thinking when I wrote “N.B.A-hole.”

I'm only an online friend at that "other place", and a faithful blog reader (both hers, and yours).

Yeah, it's a British thing, about which I shall not elaborate further. And "Roger Sterling" is a character on MM, and every time I read a news story about the Clippers debacle, I kept thinking about him, and trying to find a joke somewhere...while hoping someone else would. So you win for that, even if it was unintentional. :)

+1 for "West Wing" and POTUS Bartlet, though I don't recall that particular scene. I should really watch them all again.

"Darwinfish: Behind The Scenes"...uh oh!

Well, I'm glad you stepped from the shadows and commented. Welcome to my weird little world.

The Bartlett quote was from an episode that flashed back to his initial run for president. He was talking to a dairy farmer, whose state subsidy (or something) he had just cut, for the greater good.