Got my head banged last week, with the various reports about my favorite head-bangers, AC/DC.

On Monday, there were reports that due to the illness of an unnamed band member, AC/DC was no longer going to be recording or touring.  They reportedly had a pact that if anyone in the band leaves, they’ll fold their tent.  The information came from a member of another band, who was friends with the group.

I’ve written before about my affinity for AC/DC, so this was disconcerting news to me, for sure.  There hasn’t been a time during my years as a rock and roller, that AC/DC hasn’t been out there hammering people’s senses with deafening, hook-laden three-chord blues rock.  I immediately assumed the ailing rocker was Malcolm Young, the band leader, co-song writer and rhythm guitarist.  He’s always looked like he was mildly ill, or at least undernourished.

The next day, singer Brian Johnson made a statement saying if the band was quitting, it was news to him.  He did confirm that one of the boys was sick, but wouldn’t elaborate, saying it wasn’t his place:

“One of the boys has a debilitating illness, but I don't want to say too much about it. He is very proud and private, a wonderful chap. We've been pals for 35 years and I look up to him very much.”

Then, the next day, the band put out its own statement, confirming that the ailing musician was indeed Malcolm, and that he was “taking a break from the band.”  It went on to say that the band would continue to make music, and asked that his family’s privacy be respected. 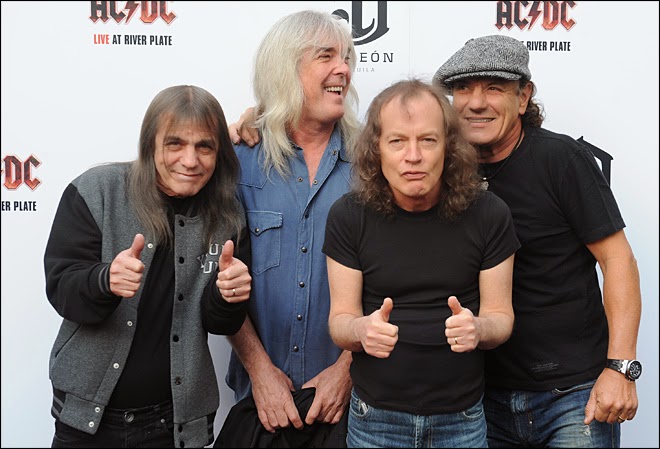 I’ve seen AC/DC in concert on 5 different occasions, one of which was their “Blow Up Your Video” tour, in which Malcolm Young’s nephew Steve filled in for him, while he went to rehab.  I never even knew the difference.  From where I was sitting, (quite a ways away), the kid was a dead ringer… skinny guy with long hair and a white t-shirt.

So I know they can still tour.  That’s not where Malcolm will be missed.  I’m wondering about the song-writing.  Malcolm has writing credits on most every AC/DC song, and as the rhythm guitar player, I’m sure he has a lot of influence.

Rhythm guitar might sound like “second fiddle,” but on the contrary, it’s what sets AC/DC apart.  Younger brother Angus gets most of the attention, because of his schoolboy suit, dizzying solos and tireless energy and showmanship, but the rhythm guitar is where the hooks live.

Think of the greatest AC/DC songs… the ones where you know from the first 2 seconds, what’s coming.  Those opening hooks that carry the primary melody?  That’s Malcolm.

Director’s DVD Commentary: I should totally go on “Hollywood Game Night.”  Of course they speak in “doots,” not “dats.”  Potato, potahto.

I’m leaving off a zillion more that probably aren’t known to the casual listener, plus, I’m running out of “dats.”  But these are instantly recognizable chunks of power chords that have been making heads bob for over 40 years.

Anyone can thrash away on a guitar.  It takes a real musician to put a hook behind the “crunch.”

So I hope Mr. Young gets well soon.  Hard rock won’t be the same without him.

“People can go out and hear R.E.M. if they want deep lyrics, but at the end of the night, they want to go home and get f*****! That's where AC/DC comes into it”  ~Malcolm Young~
Posted by bluzdude at 6:16 PM

That is sad anytime someone has to deal with something tragic and debilitating. But, as rockers and rock bands go, they've had a pretty amazing and lengthy career. It seems that all the greats are getting older and unfortunately, with age, sometimes comes demise. I hope he recovers, for his AND your sake, since you are such a fan. But, even if not, their amazing music will always live on. That's the great thing about music. It's forever.

Good thing, too. Because lord knows I’m not listening to anything current… But thanks.