Kick Prince Albert in the Can

LA Angel Albert Pujols hit his 500th home run last night and what should have been a celebratory situation ended up with some hard feelings.

The home run ball was caught by Air Force Sgt. Tom Sherrill, who turned the ball over to team officials in return for “whatever they thought was fair.”  That’s where perceptions of value apparently differ.

Milestone baseballs like this can be sold for hundreds of thousands of dollars.  The team gave the guy an Angels cap and the promise of 4 complimentary tickets to a future game.

Unless those seats are in (late owner) Gene Autry’s luxury box, in heaven, I think the guy got screwed.  It’s not like the Angels, or Pujols can’t afford it.  Pujols and two other teammates have 9-figure deals with the team, so it’s not like they couldn’t grease the good Sergeant a little better than they did.  I guess he shouldn’t have made the terms so ambiguous.

Other teams in similar circumstances have provided signed bats, jerseys, and hats, tickets, or meetings with the player involved.  Those are the kind of things that don’t really cost the team all that much, but can be highly valued by the fan.

Seeing this story makes me, a person keenly interested in sports memorabilia in general and game-used baseballs in particular, wonder what I would have done.

I suppose a lot would depend on whose milestone ball I caught… was it someone of whom I was a fan, or just another big hitter with whom I have no connection.  In other words, if the guy isn’t a Pirate, an Oriole, or a universally-loved superstar, I might not care too much.  I’d probably try to figure out what options would best work in my favor.

What I don’t think Sarge realized was that he held all the leverage.  I say; if the player or team wants the milestone ball, make me a compelling offer.  I would totally haggle with the team representative.

Let’s say I catch (on ricochet off the upper deck facing or grab from under a seat) a milestone ball hit by the Orioles’ Chris Davis or Pirates’ Andrew McCutchen.  My first ask would be an autographed game jersey and hat.  Definitely some high-quality tickets to another game.  And I would like to present the ball to the player myself.  (In other words, get to meet the guy, congratulate him, and probably get a picture.)

If the team or player balked, I’d be perfectly happy to keep the ball on my bookshelf with my other “trophies,” like the foul ball I caught at Camden Yards five years ago. 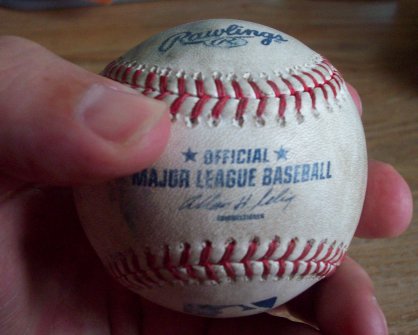 Then if the market was right, maybe I’d sell it for some long green.  Some players like to keep their memorabilia; others don’t care.  So I’d make either case work for me.

Now if I obtained the ball from a player from the opposing team, about whom I didn’t really care, I probably wouldn’t hold out for meeting the player.  If it was a future Hall of Famer and class guy like Derek Jeter, I’d ask, but still settle for a hat and jersey, maybe a signed bat.  And again, if I didn’t like the deal, I’d go home with the ball and explore my options.

The team would be crazy not to meet my requests.  Look how much bad press the Angels are getting over the Pujols ball right now.

The one thing I definitely wouldn’t do is hand the ball to some kid, who would probably chuck it back onto the field.

It occurs to me that this would be an excellent opportunity to make fun of the whole process.   How asking for some non-traditional perks, with great opportunity for hijinks:
So, all kidding aside, am I just another greedy pig?  I don’t see it that way.  No matter how much I ask in return for the ball, it’s essentially chump change to the players and the team.  Superstar doesn’t get his trophy?  I’m sure he’ll still live happily ever after with his multi-million dollar salary and lifetime of perks. 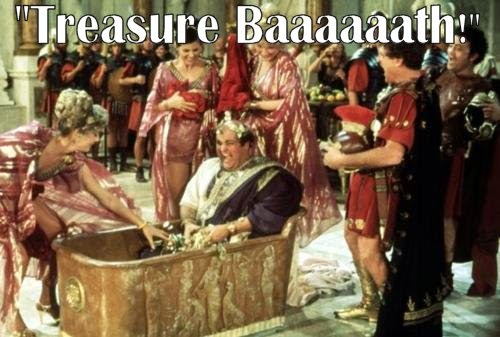 Actually, I’d be stone cold stupid not to sell the ball outright.  Choosing some autographed swag versus selling the ball for between one and several years’ salary?  Not exactly shrewd, is it?

Of course, I’d just blow my earnings on game jerseys, bacon cheeseburgers and beer, anyway.
Posted by bluzdude at 6:13 PM

Email ThisBlogThis!Share to TwitterShare to FacebookShare to Pinterest
Labels: Baltimore Orioles, News Bluz, Things That Piss Me Off