An Update from The Pit

I was emailing with Sitcom Kelly today.  Lest you forget, she’s the one that wants to dig a special Silence of the Lambs pit in her basement in the hopes of populating it with Penguins defenseman Kris Letang.  I described that story as part of a post last year.  The Pit evolved out of one of our emails too and it became a staple of the “Sitcom” about her life.
We had another email thread that started as a party discussion and ended with no one at her party except her, a pan of ziti and Letang, of course, who was already in The Pit.  You can see that post here.
So today, when the Puck Huffers featured this new pic of Kris Letang, I had to share it with Sitcom Kelly.  It went like this: 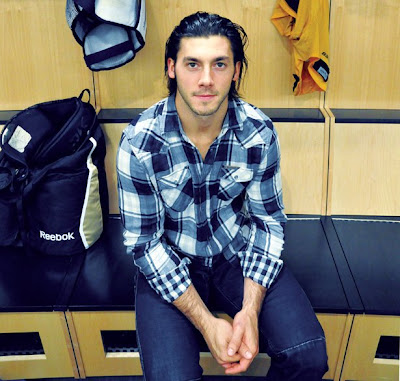 “Ere’s looking at you, dere, Si’com Ke-lee.”
SK: Funny, I was just reading a blog about my purpose in life.  And there it is.
Bluz: That’s the “Will you pleeeeeeease let me out of this Pit” look.
SK: “If you let me out, I’ll promise to love you forever.”
Bluz: (as SK) “No, you’ll just run away again.  You’ll be much happier right were you are.
SK: “Now shut up and eat your ziti.”
I was on the floor.
Later in the day, she sent me a link to NFL Shop online, where they’re selling small bottles of water made from the melted ice of the last rink surface at Mellon Arena.  Ginny at That’s Church had mentioned this last week.  For what it’s worth, I think it’s a great idea.  Not for $39.99 though.  Do we reeeeeally know that it’s not just tap water in a commemorative bottle?
So I answered back:
Bluz: PittGirl was talking about that last week… first appeared for 5.99, then disappeared from the site.  That would have been a heck of a bargain.
I love the idea though.  Can just see SK dabbing some on before a game.
SK: Have to do a DNA test to make sure Kris Letang’s sweat is in there somewhere.
Bluz: It sponges the sweat from off its brow, if it would like some ziti now…”
She didn't respond to that one, but obviously, she should be able to harvest some Letang sweat right from the source. 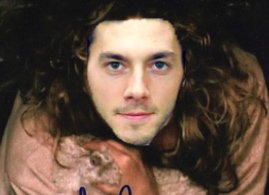 Note:  OK, now I know I may be pushing this “Letang in the Pit” theme a bit too hard.  When I did the Google image search (Silence of the Lambs Girl in the Pit) to find the base for that last shot, the picture of Letang I shot 2 years ago, and used in prior posts, showed up on page 3.  God, I love running jokes!
Posted by bluzdude at 7:47 PM

It rubs the melted ice water on its skin or else it gets SK's drool again.

If there was proof of Letang sweat in the vial, SK would be pouring herself shots...

I envision a world where SK takes the sweat for DNA, clones him and has his clone babies

You crack me up. Thanks for the laugh, I needed it. Hehe

You're going to generate an estrogen cloud around here as big as any over at That's Church with that first pic. *fan's self* Is it hot in here?

Lecter: First principles, Clarice. Simplicity. Of each particular thing ask: what is it in itself? What is its nature? What does she do, this Sitcom Kelly you seek?

Lecter: No. That is incidental. What is the first and principal thing she does? What needs does she serve by kidnapping?

Lecter: No! She covets. That is her nature. And how do we begin to covet, Clarice? Do we seek out things to covet? Make an effort to answer now.

Lecter: No. We begin by coveting what we see on Fox Sports Net and Versus and the Google searches. Don't your eyes seek out the things you want?

You hockey fans are weird. But that guy IS good lookin'.

Hmm! This gives me an idea! I might try to sell little vials of water from my dog's water dish! Or I could legitimately sell some ash from the last Mt. St. Helen's eruption. Actually, I have a piece or charred wood from the massive fire at Yellowstone several years ago.

Bluz, all I know about hockey is that they fight a lot, but I keep coming back to your blog 'cause you're such a neat guy!!

My dream is… someday Letang will come across your post and … make a comment. Or a plea for his safety…

Miley,
I love that! That’s an episode idea right there!

And it plays right into one of our themes… namely that even though she’s got the guy live, in person, she still daydreams and fantasizes about him as if he were far away.

But to take the idea even further, if there indeed IS sweat from various players in the ice-water, I see her creating a whole squad of cloned players… each one in his own Pit. Perhaps she sends them out to do her bidding.

Raven,
Glad to help! I know sometimes we all just need some goofy shit in our lives, to take the edge off.

RPM,
To the men in the vicinity of the estrogen-overdriven women: “You’re welcome!”

(We’re not too proud to capitalize on the reflected hotness of the young bucks.)

Meanwhile, my Mom sent me an email saying that SK better be careful not to serve him too much ziti, lest he pudge up down in the Pit. I sent the comment to SK, who replied, “But the ziti makes him love me.”

I suggested it may also be the horse tranquillizers with which she laces the ziti.

Jessica,
I tell you, up north, hockey is pretty popular with women (that live in markets with a local team.) I think it’s that a typical hockey player is built more like a regular dude, in that he’s not usually 6-6 and 300 lbs. Plus, you can see their faces during the game.

Between the good looking guys and the speed and the collisions, it’s an estrogen stew! (Just ask Red Pen Mama.)

And really, this post isn’t as much about hockey as it is about my twisted, love-sick friend and our fevered imaginations.

Sitcom Kelly,
My nightmare is that the police will show up.

The end of that sentence was extremely crushing.

Mundane,
Everyone should have minions. It's just that hers would be cloned hockey players. Is that too much to ask?