I Don't Think I Can Dance

Just got back from the So You Think You Can Dance 7 Tour, which was just at the First Mariner Arena in Baltimore. 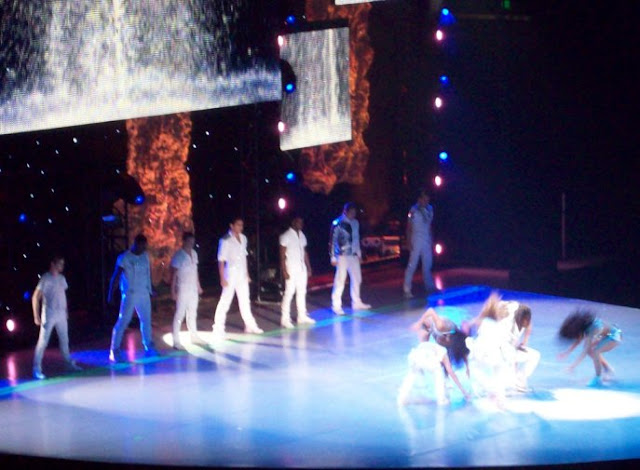 Part of the opening number.
We had decent seats on the side, but not so good that I could get any pictures where you could see faces.  The dancing was unbelievable, but the only beef I had was with faces.  For all the video screens they had behind the stage, you’d think they’d focus on the stuff you couldn’t see from the back and sides… They should have had the cameras zoomed in on the dancer’s faces, especially at the end when they stood still to bow and soak in the applause.
But really it’s just a quibble.
There was no Cat Deeley sighting either, although she was there on the video screen during the clips, plus they had her voice recorded for introductions.
I don’t know enough about dancing to provide any coherent critique of the show, nor do I have the memory to recall which people did which dances, with whom.  Mostly, I just enjoyed watching the hot dancer chicks.  The thing about these dancers is that they’re not these stick-thin ballerina types.  These girls have thighs that can crack walnuts. 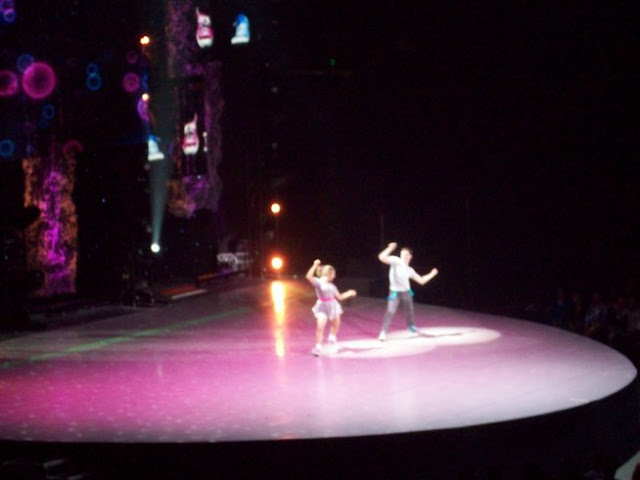 Season 7 Champion, Lauren, and runner up, Kent.
The sheer athleticism necessary to dance these kinds of dances is just amazing.  My favorite bit of the evening was when 3 of the best hip hop dancers came out and took turns just tearing it up.  They could freeze in the most unbelievable positions, holding themselves up off the stage with one hand.  These dudes made John Travolta in his prime look like a zombie.
Anyway, it was a solid 2 and a half hour show.  It did get draggy a bit… it’s like when they have the 2-hour shows on TV.  Round about and hour and a half in, I start to check my watch because I’ve had enough.
Worst part of the night was that I was sitting next to a human beach ball, so I had to kind of hang over on Pinky’s side.  Got to be a little crampy after a while.
Rather than try to think of a clever way to end, I’m just going to throw in one more picture and go to bed.  The time to make the donuts comes early… One of the ensemble dance numbers, a Bollywood routine.
Posted by bluzdude at 11:50 PM

I kinda want to make fun of you for going to that show, but at the same time I'm tempted to see if it's going to be in Pittsburgh any time soon. ACK!

I would love to see one of those in person. Professional dancers fascinate me with their abilities. Thanks for the pics to ooh and aah over.

I love that you went to this and I'm kind of jealous too. All we get in this neck of the woods are beauty pageants.

I always wanted to dance like that. Unfortunately I have very bad balance, and only one left foot.

I'm so down with this if it comes to Pittsburgh! It goes along the lines of Glee and we all know how I loves me some Glee!

Glad you stayed off the stage!

Bluz, you should have come with cards with numbers on them in order to judge the acts. Do they do that on this show? I've never seen it.

Ashamed to say that a couple years back, I took the Mrs. to see the American Idol show. Tickets were fairly cheap and she had been into the show that season. Plus, it was an excuse to go to something inside Mellon Arena before the end. I have a feeling these kids were better dancers than the A.I. kids are singers, cause they were lame-o!

Bachelor Girl,
I know… then it obviously goes straight downhill from there.

Burgh Baby,
The girl with the poofy princess dress and pumpkin hair is going to make fun of ME? (I saw the pic from Uncle Crappy.)

Hey, the show was a lot of fun. If you or Baby Girl like the TV show, you’ll like the tour.

Cristy,
Judging from all the phone-video being taken from the front sections, there should be an abundance of material from last night on YouTube.

I know the tour was planned to go through Pittsburgh… that may be the closest for you. I think I saw they were supposed to play the new Consol Energy Center, where the Penguins play.

Jessica,
Well, it wasn’t like I just decided to round up the boys and go watch some dancing… this was Pinky’s birthday present. She needed a nice night out on the town. We had some dinner down at the Inner Harbor, walked around a bit, then took in the show.

Beauty pageants, huh? Believe it or not, I’d take a pass on that.

Judie,
I always wanted to be Tony Manero from Saturday Night Fever. That was the epitome of cool to me back then. Now I’d rather listen to Dancing Queen than be Disco King.

Wormy,
As a public service for you and anyone else reading from Pittsburgh, I looked it up and the SYTYCD7 tour is coming to Consol Energy Center in the Burgh on Friday October 22nd. I don’t know if it’s sold out yet (Baltimore wasn’t) but I can see tickets available on Stub Hub.

Mary Ann,
Why, to spare me from the Killer Thighs of Death? That would be a pretty noteworthy demise, wouldn’t hit? Being thigh-choked to death onstage of So You Think You Can Dance…

Bagger,
Those kids were phenomenal dancers.

On this show, the judges offer appraisal, criticism and advice. They do not specifically score the dance, like they do on Dancing With the Stars. Then America votes for the cute ones… I mean the best dancers.

I thought at first that you must have been forced into this, but I kind of get the feeling that . . . you liked it.

I really thought Lauren was pretty amazing from the beginning, though, so . . .

Mundane,
Well, Pinky asked, I poo-pooed, reconsidered because it dawned on me it would be a good birthday present, and I DO admit I like the show... so, what the hell?

Lauren is a doll, but I keep having to check myself. When you see hot girls on TV, you forget sometimes the little facts like SHE'S IN FREAKIN' HIGH SCHOOL!!

So then I go obsess over Cat Deeley instead.

Cowboy, I LOVE Dancing Queen! Just wish I could dance like one!

Judie,
You just need to feel the beat of the tambourine; oh yeah.