Tonight at 7:00 the puck drops on the Pittsburgh Penguins 2010-2011 season.  I’m so excited, I can’t even see straight.  It does add stress, however, because now I have to begin that season-long dance of managing to watch all the games plus DVR and watch all the regular TV shows I usually watch.  By mid-December, I ought to be surgically grafted to my easy chair.
This morning, I saw in Seth’s Empty Netters blog on the Pittsburgh Post Gazette, that the Pens are up to their old do-gooder tricks again: donut and coffee delivery to the Student Rush line.
If you’re a non-Burgher, the Student Rush is a program where the Pens hold back a number of tickets to be sold on the day of the game, at a discount rate, to anyone with a student ID.  This is a throwback to when the Pens were not very good and not drawing much of a crowd so they started this program to put butts in the seats.  And these were young butts that got turned on to the excitement of live hockey.
The Pens have no problem selling out their house now, with nothing but season tickets, but still, they continue the Student Rush program (for select games), to say “Thank You” to the young people of Pittsburgh, for their support.
In the past, the players have appeared to pass out hot pizza to the kids in line.  This morning, it was Head Coach Dan Bylsma, General Manager Ray Shero and Team President David Morehouse that showed up with donuts.
I swear, this organization does not miss a trick when it comes to good fan relations.  Other teams from any sport would do well to pay attention.
Grizzly Madams
Much is being made over Sarah Palin’s “Mama Grizzlies”, as she calls the conservative females she’s endorsing for various offices.  They were the cover story, last week, on Newsweek magazine.
I’m as happy as anyone to see more women running for office, but why do they have to be such whack-a-loons?  These people are so crazy, they’re scaring their own party.  Even the evil Karl Rove referred to Christine O’Donnell, who is running for the Senate seat in Delaware, “nutty.”
How nutty must one be to scare of Rove?  I imagine what he really means is that she’s a true believer.  So many of the Republicans use the religion and family values/anti-sex platform to get elected, then get on with the business of keeping big business flush with cash, the government's and otherwise.  He’s afraid the nutjobs are going to get in there and then expect to actually roll back the progressive advances of the last 25 (or 50) years, and forget to cater to their corporate benefactors.
Anyway, there’s a great quote at the end of the article, written by Lisa Miller:
“Fundamentally, the mama-grizzly phenomenon is not really a movement or even a political term that represents a fully coherent set of ideas.  It’s mostly a marketing tool, meant to draw attention to Americans’ broad dissatisfaction with the way things are.  Fair enough.  Many people are dissatisfied and they want to vent and they want to change Washington.  But in the wild, real mama grizzlies are known to be aggressive, irrational and mean.  The issues facing the country are complex and bears are not.”
Meanwhile, my mother, aka the Poet Laureate of Darwinfish2, put this together to illustrate her take on the MGz:
THE GRIZ MAS
Dark brown hair flows
over tailored red jackets
around long earrings.
White teeth gleam
from smiles big as Alaska.
You women vow
to back off big intrusions
on our lives, our children’s fate
twit of taking back our country
taking care of cubs
ignore kids with no crayons,
lunches, insurance
girls with no homes
no help, no husbands
to whom they can ‘graciously submit’.
Winks, pantyhose
manicures replace
unblinking yellow eyes
matted fur, fangs
towering ferocity.
When she comes
to your cabin, places
her paw on your window pane
will you match your hand to hers
compare claws?
Mary Ann  10/6/10 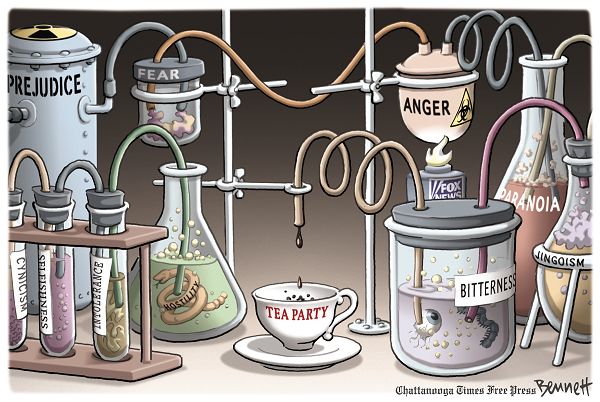 Palin makes me want to chew off my own face... I hate that cunt!

Thanks, Bluz. My anger goes out to these twits who compare themselves to dumb decent animals. They can't even defend their reputation or an important point much less kids for whom they don't really give a shit.
On to the Penguins with my sparkly mojo.

CB,
Don't knock hockey until you give it a chance. It's a lot more exciting than watching people drive around in a circle.

The idea of Palin being in charge of anything... a government, a book club, a Blockbuster Movie card... gives me the heebie-jeebies.

If she wasn't hot, no one outside of Wasilla would know her name.

Mary Ann,
Actual grizzlies take better care of their cubs than these dipshits would take care of a state's or nation's kids.

Your mom's poetic license is absolutely wonderful and deserves many awards. And it seems that Pittsburgh is doing great these days. I love that the Penguins take time for the students.

Christy,
That's why she's Poet Laureate. Plus she can still ground me.

Cassie,
So shoot me over a typo as I rushed to complete the post before faceoff. I'll go fix...

Hey man. It just shows your A.) dedication and B.) super duper excitement.

Great Tea Party cartoon. That says it all.

I love the poem. That's damn good! And the comic is funny as hell.

I'm out of it when it comes to politics so I missed the Mama Grizzly reference. Damn, what's next for that woman!?

Cassie,
Fat lot’a good it did us last night, huh? They had a lot of chances and open looks, but alas, few goals.

But geez, I love watching hockey in hi-def. Too bad that the Center Ice package doesn’t come over in HD.

DCG,
Another winner, courtesy of First Door on the Left.

Guy,
What’s next? Oblivion, I hope…

Judie,
The bad breath is from the decaying remnants of their souls, left stuck in their teeth.

Bluz, your Mom's poem was fabulous! Of course, your writing is top-notch and you nailed this one. You go, Bluz!

She does have a way, doesn't she? That's why she's Poet Laureate of D2.

That cartoon really says it all, doesn't it?

BG,
Yes, it certainly does. Brilliant!