Now that we've said bye-bye to the Steelers bye week, I was looking forward to some Pittsburgh football this weekend.  The Steelers were getting their perv QB Ben Roesthlisberger back after a 4-game suspension to open the season and it was to come against the hapless Cleveland Browns.  Alas, the game was opposite the Ratbirds/Patriots game and wouldn’t be on local TV, so I had to make plans to watch at my neighborhood sports bar, Jilly’s.
So, what to wear, what to wear?
After consulting my mojo spreadsheet, I see that the only time this year that I attempted to match prior history, we lost.  Last year, I faulted myself for trying to force patterns and not recognizing that it was randomness that was being rewarded.  So with that in mind, I decided to forgo matching what I wore the last time the Steelers won when I watched the game at Jilly’s, and go with something new.  I opted for my black Steelers polo with gold stitching, along with the hat I got from Honus Wagner’s in Pittsburgh and my customary Steelers socks. 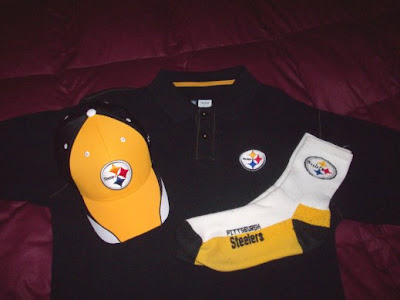 As a bonus, my brother Ed wanted to come out and watch the game, so we had that rare Bluz Brothers mojo going. 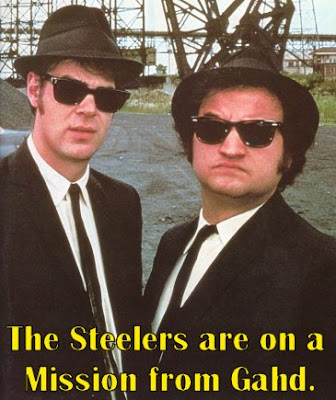 I was initially alarmed when I saw the game starting because the Steelers were wearing their throwback uniforms.  (Black jerseys with gold numbers and white pants.)  If I’da know they were rocking the throwbacks today, I’d have worn my throwback jersey to the bar.  It left me a bit uneasy.  I really should have checked the Pittsburgh paper before I left.  They usually only wear their throwback jerseys twice a year and I have 2 of them.  That cost me a chance to wear one at a prime mojo opportunity.
But then again, they were playing the Cleveland Browns, who were starting a rookie quarterback.  We shouldn’t need much mojo.
And it turns out we didn’t.  The Steelers won fairly easily, 28-10.  Rookie quarterback actually did fairly well, considering the dudes on the other side trying to take his head off.  But not well enough.  Big Ben’s comeback, while not without hiccups, worked out OK.  Dude just needs some more reps to get back in synch.  The Brownies were a good way to ease back into the NFL.
So mojo-wise, it’s looking like it’s a lack of pattern that produces the wins.  We’ll see if that continues throughout the season.  At some point, I may have to repeat myself.  I don’t, after all, have an infinite supply of different Steelers gear.  (OK, so I can probably go a couple of seasons without repeating… that’s not infinite.)
As an added bonus on the day, my old friend and former Work Wife, Pam, called to see if I was at the bar… she wanted to come out and watch her Cowboys on the 4:00 game.  I say “former” Work Wife because she left me, I mean, left the company about 4 years ago.  Someday I’m going to have to do a whole post about Pam.  She’s such a trip.
Yes I know the Cowboys were on regular TV… girlfriend needed to get out of the house.  So that’s how I ended up at the bar from 12:30 this afternoon until about 8:30 tonight.  That is one solid day of boozing it up.
The other added bonus of the day was that the Ratbirds lost to the Patriots.  That’s a missed blessing at best, though, because I never want the evil Patriots to win, but better them than the Ratties.  I don’t have to deal with Pats fans at work.
Last week, there was a Ratbird fan gloating to me about how the Rats were in first place.  They were 4-1.  The Steelers were 3-1 at the time, after their bye week.  That’s all it takes around here to gloat… a half game in the standings.  Idiots…
So it’s been a long, boozy day, and I hope you don’t hold it against me if I cut this off and go the hell to bed.
Mondays should be outlawed during football season.
Posted by bluzdude at 10:57 PM

As much as I loathe the dude, I was glad to see everyone excited to have Ben back. I went grocery shopping and all I saw were number 7 jerseys. Everywhere.

I felt kind of left out wearing my Great Race tee. At least it said Pittsburgh on it, right?

I am so much less superstitious when it comes to football attire than I had been previously. But then I read your post, and it made me think I need to step up to the plate. I did get nacho cheese on my autographed Ward jersey yesterday. To wash or not to wash? That is the question.

Your comment about your work wife makes me miss my (ex-)work husband. When he was laid off about 7 years ago at the company where we worked, I refused to give him a work divorce. They hired him back the next year, so it worked out. Unfortunately, we were both laid off last year at different times, so I guess I am stuck with only the real husband. ;-)

Why is it that your outfits always look like they have never been worn? Especially your socks! Do you iron your socks? Or do you buy a brand-new outfit, photograph it, and then take it back for a refund? And if you actually wear that outfit, how does it look after 8 hours of eating and drinking? How about a picture of that!

The Blues Brothers are my favorite sibling duo of all times! I love that picture!

I have to start being more aware of what my family and I are wearing on Steeler Sundays. I mean, I had my older daughter in a purple shirt at church! What is wrong with me?

I refuse, however, to invest in maternity Pittsburgh wear. Time to raid my husband's stash.

It has been a LOOOOOONG time since I spent a whole Sunday during the football season boozing it up. This game found my daughters and me having an impromptu lunch of cheese, salad, apples, and crackers in front of the TV in my living room. After we had cleaned up all the Littlest Pet Shop crap, of course. As much as I may miss the beer right now, I have to confess that I like watching the games with my girls (and with baby boy kicking away contently).

Cassie,
You can be forgiven because you’re primarily a hockey fan. And it did say “Pittsburgh” so there are no doubts as to your brand loyalty.

I was also glad to see the big perv back in there. I missed having a QB back there that can still deliver the ball downfield with massive dudes hanging all over him.

Facie,
According to the tenets of Bluzian Mojo, mystical qualities only exist where you believe they do. So if you do not believe that the nacho cheese constitutes a mojo criterion, you are free to wash the garment. To me, it’s the #86 that has powers, not the game-day by-product that gets spilled on it.

For the complete Bluzdude Mojo Program, please see this post from before last season, where I spell out the rules and philosophy. http://darwinfish2.blogspot.com/2009/09/mojo-boogie.html

Regarding my Ex-Work Wife, I’m definitely going to have to do a Pamela post. She was like my left arm, when we worked together. The only thing that saved my sanity was that I left the department for another within a month of her leaving the company, so I didn’t have to stomp our old grounds without her.

I used to joke that I was getting the raw end of the deal, compared to her husband. I had to put up with all the same crap from her that he did, but reaped none of the, um, “rewards.” To which she’d say, “He ain’t getting’ rewards, either!”

Judie,
Oh, they’ve all been worn. I just smooth them out real nice before photographing. The clothes are always washed… I don’t believe in the Not Washing Your Game Clothes mojo. I hate returning things, even when they’re actually not right or don’t fit, so I’d NEVER pull the old “Wear It Once and Return It” scam. Although I do know others that do. Losers…

RPM,
I wouldn’t invest in Steelers maternity-wear either, unless I was planning many more childrens. Using hubby’s stash on a temporary basis is a completely logical solution.

I love watching the Steelers (or Penguins) as a family event. That’s how I remember is as a kid. Of course, where we were living, they weren’t on every game, so when they were on TV, it was a big deal.

I can imagine that it must be very reassuring for you that baby boy is kicking away, reminding you that he’s there.

You and your spreadsheets...I absolutely love it.

We, too, watched as a family, in Pittsburgh if we could make the trip (my dad grew up here). Erie STILL doesn't air Steelers games (or my dad's cable package doesn't), and it frustrates him to no end. But, hey, it's an excuse for him and my mom to have lunch out on a Sunday, maybe with a beer or bloody mary.

Mrs Bachelor Girl,
First of all, congratulations on your “change of title”. So is “The Guy” now “The Husband?” Either way, I wish you both all the best.

And of course I have a mojo spreadsheet. Doesn’t everyone? How else can you keep track of what you wore, when and where?

RPM,
I thought that part about more childrens would get a rise out of you! And not just because of the grammar violation…

Yeah, I can imagine that Erie would fall under Buffalo’s sphere of broadcasting.

Glad to see your gameday mojo came through. I followed the play by play while attending Grandpa's 90th birthday. At least it was a good reason to miss the game.

AND, the only good thing about The Anointed One winning the Baltimore/NE game was that in the post-game he totally looked like a really ugly drag queen. Dude seriously needs a haircut. My brother, cousin and I were grousing about him, and my mother asked, "Do you all hate him as much as SHE does?" "YES". Ahhhh, family.....

DG,
God, I hate having to root for the Pats. It’s like it causes a disturbance in The Force.

But isn’t technology wonderful? Carpetbagger and I had to do the same thing at Podcamp… watch the play by play updates roll in over his phone.

I'm so glad you're here to keep me updated on how the Steelers are doing.