I had the weirdest dream, early this morning.
I was in a big, formal conference room with a notebook and a bunch of papers spread out in front of me and I was working on writing something.
In walked the President… Richard Nixon.
Right off the bat, are you fucking kidding me???  Growing up, Nixon was despised in my household.  I became “politically aware” following the Watergate scandal as a junior high-schooler and celebrating his resignation.  But even so, I haven’t thought about his ass in years.  And here he is in my dream, and I’m not even surprised to see him.
He asked me what I was working on.  I answered that I was writing about my boyhood baseball idol, Roberto Clemente.  He seemed pleased with that answer and began signing each of the pages on the table.  It wasn’t that he was claiming credit, I got the impression that he was autographing each page, to make it worth money… y’know, because he was the President.  And famous.  And dead, but I don’t think he realized that yet.
THEN… a girl came in with a deli tray.  I don’t know who she was, but I began making a big ham sandwich.  I always go big, when it comes to deli tray. 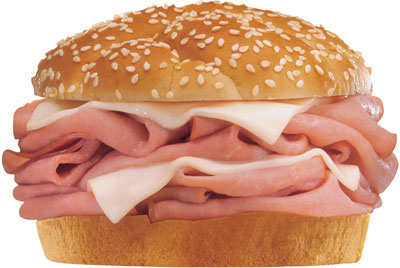 Then I woke up, and let me tell you, I was PISSED!
It wasn’t because I was dreaming about a disgraced ex-President.  I was pissed because I didn’t get to taste the ham sandwich.
I have no idea what to make of any of this.  Help me, Dr. Freud!!! 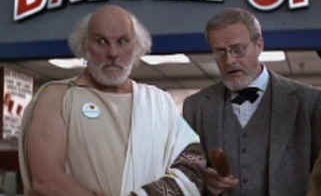 And you can ask your friend So-crates too.
Posted by bluzdude at 6:13 PM

I've had some weird dreams like that. I think of it as my brain going into "shuffle" mode.

Are you eating a ham sandwich like that now? :-)

I WISH I had a sandwich like that for dinner. I love big sandwiches.

I hate when you dream of food and are just about to eat it and then wake up.

THAT, honey, is what freud would say.

I had a dream once about bacon.. I would up screaming "DON'T EAT ALL THE BACON!". I didn't get to eat any in my dream either :(

Dazee,
That's one of the things that was so weird... It was like, "Oh, the President is here for our meeting."

The problem with dreaming about eating is that you wake up with a wet pillow. And possibly holes in the pillowcase.

Miley,
If the ham were pressed into a giant sausage roll, I'd be inclined to agree. But it was a sliced deli tray.

I love that the weirdness of our dreams only seems weird after we've woken up. I'd love to be so cool that nothing phazed me like I am in my dreams. :)

Who are you ticked off at? Maybe The Prez was representing that person and your brain was telling you to get over it? And your cholesterol and glucose levels are better off.

Cassie,
Maybe it's a Mama Cass dream... ham sandwich + Dream (a Little Dream of Me) = Mama Cass. = Cassie! OMG! I was dreaming about YOU!

Cristy,
That's the funny thing about dreams... whatever happens, we always think it's perfectly normal. Then we wake up and be all WTF??>

Last night I dreamed that Rod and I were back in high school, and that we were in the auditorium for some sort of program. All the girls in the class were pissed that I was married to Rod, because he had been voted "Best Looking" and "Most Likely to Succeed" when we were seniors, and they all wanted to date him.

It disturbs me that you said you hadn't thought about Nixon's ass in years. Please tell me that you meant to say his administration.

HAHAHAHA! "Throw me something, mister!!"

Judie,
Of course I was being metaphorical. I was referring to his whole posse of crooks and "second rate burglars."

Look at you... married to the Homecoming King!

I'm pissed I don't get to taste the sandwich in the picture.

BG,
And just think, the picture isn't nearly as savory as the sandwich in my dream. It was, however, the closest I could find on The Google.

Are you feeling a bit unsure of something these days?

I have the same thing, but it's usually a heavy make out session with Taylor Kitsch.

The picture of the ham sandwich made my mouth water.

I hate it when I have dreams that something is chasing me (grizzly bears, for example) and if you wake up before you escape danger, you have to finish the dream the next time you go to bed. Or maybe that's just me.

Wholly unrelated - my son did a report on Socrates recently. I kept calling him So-Crates. He was no amused (but it made ME laugh every time!).

Here goes: Nixon was a BIG Ham, good at melodrama, chewed lots of scenery. He was gone before you had a chance to bite his ass.
Howzat!
You can throw a dollar in my crystal dream interpreter any time.

Gina,
What I wouldn’t give for an Isaly’s chipped ham sammich!

Guy,
I KNOW, right? What a weird assortment of subjects to appear from my subconscious.

Faux Trixie,
At least your dream makes some sense.

Have you ever had a dream about someone you know, then the next time you see them, you feel all weird, like they know? Dreams are so strange…

There seems to be widespread support for the ham sandwich.

DG,
I may have recurring dreams from time to time, and sometimes I’ll pick one back up after I wake up briefly, but I’ve never finished one the next night.

I once had a recurring dream that me and Linus (from Peanuts) were running away from Adolph Hitler, who was trying to shoot us. The first time, he got me. The second time, I realized what was going to happen and got away. But still… WTF??? Hitler and Linus??

I never fail to laugh when Bill and Ted call him So-crates, almost as much as when Freud shows up at the mall food court holding a corn dog. I love that movie… one of the all-time great “stupid movies.”

Mary Ann,
That makes more sense than anything I’ve seen so far. The Oracle of Lil Mother. Hmmm…

Did you notice how Nixon didn't try to steal your ham sandwich? That's because he's Not a Crook.

Sherry,
I don’t know that I can make that leap. That sandwich never left my hand before I woke up. Now if I’d left it out on the table and left the room, he could have very well stolen it. I also make room for the fact that he was the one that woke me up so that I’d leave the sandwich behind, in dreamland.

He was, after all, Tricky.

OMG. You're right. Sandwichgate! I'll get my reporter buddies right on that. I don't care that the guy's dead. One pardon is plenty.

This one's easy. Clemente means you are nostalgic for Pittsburgh and wish to return to the city of your youth. Richard Nixon represents the angst within your family as a youth, and brings conflict and tension into the warm nostalgic feelings. Yeah, and the ham sandwich either means you're gay or some weird Freudian thing about your mother.

Bagger,
I still maintain that if the lunch meat represented gayness, it would have had to be in a roll of some type, like a salami.