I just got back from having a happy hour with Sitcom Kelly.  That’s always good for a blog post idea.
I had an idea of what I wanted to write about tonight, but I know that it would take time, sensitivity and care.  I don’t have any of those things right now, because I’m basically still drunk.  So I’m calling an audible.  (Mrs. Bachelor Girl, that’s football-talk for changing the play at the last second.)
First, there are 2 factors at play here.  For one, Sitcom Kelly (SK) has been promising that she’s going to start a blog, any day now.  I’ve been prodding her along because given the material that her life hands her every freakin’ day, it would have to be a riot.  So tonight she promised that she was going to start her blog this very night, as soon as she got home from happy hour.
There is no chance of this happening.  The cats will need her attention, or she’ll spend 3 hours on the phone with her sister or some friend from out of town, or raccoons will have gnawed through her modem connection… there will be something that keeps her from starting a blog tonight.  (Most likely, the 2 pitchers we sucked up tonight.)
The other thing is that she just got back from a trip to California and Colorado.  Included in that trip was an excursion to Disneyland.  One of the things she told me tonight is how she basically had to elbow kids out of her way in order to get the perfect photo of Donald Duck.  (I don’t doubt this for a second.)
While I maintained that what follows would make a great post for SK to write, I know damned well that she’s not going to start anything tonight, other than a fresh bottle of wine.  So with apologies rendered, I have to write about this idea.
Our discussion went on to wondering how marketable it would be to have some kind of Disney After Dark… an alternate Disney universe where there were no kids, the adults could revel in their lost Disney memories and fantasies, and the characters could let their guard down and enjoy a little adult interaction.
Can’t you just see it?  Donald Duck gets to take off his top, as well as his pants, which he hasn’t ever worn in the first place.  Maybe Mickey gets to put on a paisley shirt, since he never gets to wear one at all.  He’s belly up to the bar and commiserating with the bartender without having to use that fake high-pitched voice.  In my head, he sounds more like Krusty the Clown…
“Ehhhh… Fuckin’ Minnie… always busting my balls… look at her over there, playing the slut for the tourists…”
Minnie is in the back of the room, letting the grownups do body shots of Jagermeister out of her belly button.
“And look at those two,” pointing to Goofy and Pluto, who are smelling each other’s butts.  “You just know they’re doing it doggy… well, you know.” 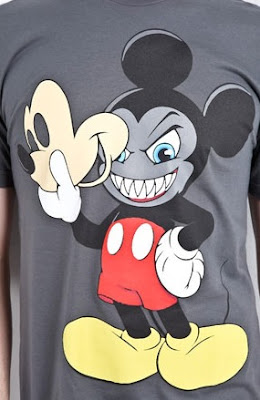 “Freakin’ Cinderella… she’s not even out of the pumpkin-mobile 10 minutes and she’s got Princes lined up out the door.  Carrying on like she’s the Little Freakin’ Mermaid.”
Mickey points giant white thumb toward the redheaded mermaid across the room.
“Look at her… She says they all wanna ‘Kiss the Girl’.  You know what I say?  They’re just happy to find a hot chick that doesn’t talk!  Bitch barely has legs for 10 minutes and already she’s got'em in the air.
“And what’s with those fucking dwarves, anyhow?  They got their own high Ho, why they gotta be singing about her all goddamned night?  It’s enough to drive a mouse to drink.  It’s all I can do to squeak by any more.”
The bartender brings Mickey his food order… a fish sandwich.  Mickey lifts up the bun, noticing the colorful fish within.
“See Nemo?  Should’a listened to your old man.  You wouldn’t have been in this predicament.  Barkeep, a little hot sauce please?”
***
I probably should say that SK wouldn’t have taken the scenario quite this far.  Perhaps she has more sense than I do…
*Note:  This is just a product of my fevered imagination.  This is NOT a paid advertisement for Walt Disney Enterprises, nor is there any such adults-oriented Disney attraction.  Yet.
Posted by bluzdude at 9:06 PM

This cracked me up! Thanks for the laugh. Tho I don't think the happiest place on earth would condone such bitter talk, however the bellying up to the bar sounds pretty dang happy to me!

Jessica,
Even those that frequent the Happiest Place on Earth need to blow off a little steam now and then.

LMAO. I can just picture that scenario!

Those big Disney characters scare me! It's got to be hot in those outfits, and what's to prevent them from running amok with heat stroke and attacking unsuspecting visitors? Think about THAT one! Mickey grabbing some kid with cotton candy! That could prove to be a sticky situation!

If that t-shirt wouldn't give my daughters nightmares, I would buy it right now.

Sign me up and book my flight....I'm going to Disney World! This is my kind of vacation.

You and Sitcom Kelly TOTALLY need to start your own theme park.

And your readers need to start a legal defense fund for you, but it'll be worth it.

P.S. Why can't you change a play at the last second?! That's just good game strategy, is what that is!

Do mice have belly buttons??? Wow, at last a meaty role for Minnie. And I have always wanted to smack those insipid rodents right across their big, stupid ears.
Walt Disney turned our entire culture into inane cartoons and convinced us gaudy banality is fun.
You have done America a great good civilized service. Down with Donald's Pants!

Raven,
I could have gone on, but I just wanted to get something out and then go watch some TV. It was a long day…

Judie,
I’m surprised that more of them don’t have meltdowns in public. That’s why a place like this for them to unwind is so important.

I hear Mickey sneaks into the concession stands at night and snorts the nacho cheese.

RPM,
Maybe it’ll be enough for just to know that shirt is out there.

Wormy,
Yes, we can even offer various packages of debauchery.

MBG,
What a great idea! Actually, Sitcom Kelly’s life is already like a fun house… It’s not much of a stretch to make it into a theme park. There’s Drunkenland, where all the floors and furniture are tilted, and everyone appears to be gorgeous until the lights come on. There’s Date-For-Food-Land, where in order to eat, you have to scare up someone to buy you a meal. Then there’s the Giant Box of Cats.

Yeah, there’s some promise in that idea.

Yes, you CAN change a play at the line of scrimmage. That’s called an “audible.”

Mary Ann,
I was never a Disney fan growing up. Even as a kid I thought it was all too hokey. I was much more of a Looney Toons man, myself. Bugs rocks! And I didn’t appreciate it at the time, but Foghorn Leghorn had some great lines…

“That dogs’s as sharp as a hand grenade in a barrel of oatmeal.”

"Nice girl, but about as sharp as a sack of wet mice."

Oh, Bluz. You just made poor Walt's frozen head spin around inside that icy cryogenic chamber where his brain has been preserved all these years. Right in between Ted Williams and Elvis.

And, what is it with your fixation about D. Duck's lack of pants? Jealous? Why don't you be a trendsetter and take 'casual Friday' one step further and institute 'pantsless Friday?'

I'd try that, Dick, but every time I'd turn around I'd knock something off of my desk.

And NO one would want to see me have to pick it back up.

You've yet again left me without words.

Drink some beer for me!

See what happens when you drink and blog? You receive Cease and Desist letters from the Disney Corp., I'm pretty sure.

I was waiting for you to get away from the animals and on to (or onto) the princesses. Jasmine, Snow White, Mulan, Aurora, Cinderella, Pocahontas, Ariel, Belle, Tiana... not to mention Tinker Bell. (Yeah, I had to look those up.)

All of them completely messed up because of their Daddy and abandonment issues. Any chance of getting them to Wormy's pole dancing classes? Just askin'.

“Beer… the cause and solution for all of life’s problems.” ~Homer Simpson!

Bagger,
As I intimated in earlier comments, I could have continued on with other sights around the venue, but I really wanted to just hit {Publish} and get on with watching TV.

Plus, after doing the Little Mermaid like that, I thought I’d pretty much taken a couple of solid strides over the line.

See how quickly one can sink to the depths?