Today, to prepare for the Steelers on Monday Night football, we had another meeting of our clandestine Steelers fan club, the Steel Citi Underground. 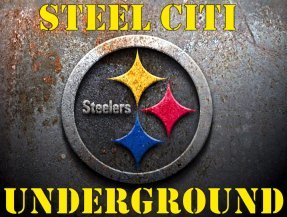 We got together for lunch in the cafeteria again.  I noted that we did the same thing before the Steelers/Ravens game and then we lost.  I said if we lose again tonight then we’d better can the lunches.  Or at least move to another spot in the cafeteria.
During lunch we were discussing material to put on signs for when the Steelers come to play the Ratbirds in Baltimore.  We’re expecting a lot of flack over Ben Roethlisberger, so one suggestion was, “Our Criminals are Better Then Your Criminals.”
Then I chimed in with the following suggestion:  “Our Stallworth went to the Hall of Fame.  Yours went to prison.”*
It went over pretty well.  One of our people is looking into getting T-shirts made.
I’ll have the lowdown on tonight’s game mojo at the end of the post.
*Note for Non-Pittsburghers: Steelers had a very accomplished wide receiver named John Stallworth, who was elected to the Pro Football Hall of Fame a couple years ago.  The Ratbirds have a wide receiver on their team now, named Donte Stallworth, who just served a year in the slam for killing a pedestrian while driving drunk.
Who Lives There, Imelda Marcos?
One drawback to living next to people that believe that shoes are unclean is that your apartment foyer smells like feet. 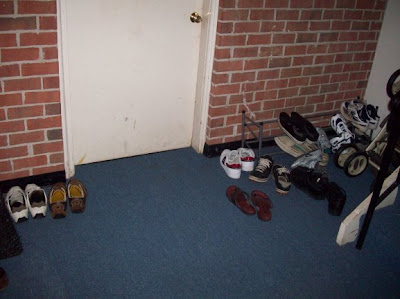 Weekend Update
At risk of making you hate me, I have to tell you about how little I did this weekend.  I was so sloth-like, when I woke up this morning I had moss growing on my north side.  My big chore on Saturday was to hook up my new Blu-Ray player.  Sunday, I read (part of the) manual for the new digital thermostat my landlord installed.  Now Pinky and I can argue about the temperature digitally.
Seriously, that’s all I did all weekend that can even remotely be considered productive.  (Other than writing that wedding post on Sunday, but I consider that “play.”)  Pinky had to work all weekend so I had the place to myself.  Just me, my PC and my HDTV.  Life is good.
(Cue all the frazzled parents to commence stabbing their monitors with letter openers.)
I hadn’t intended to buy a Blu-Ray player just then, but my DVD conked out last weekend.  It just wouldn’t load the discs any more.  The one thing I’m thankful for is that the Blu-Ray will play my old DVDs, so I won’t have to replace my entire collection.  Thank Sony for small favors.  But of course I had to pick up at least a couple Blu-Rays, just to check out the capability of the new unit.  The question was “Which ones?”
The obvious solution was to ask the question, “What’s on sale?”
I ended up with a two of my favorites, from the $15 rack: “Forrest Gump” and “An American Werewolf in London.”  From here on, when I want to buy a new video, if it’s a big SFX blockbuster, I’ll buy the Blu-Ray.  If it’s a quiet, more character and dialogue-driven work, I’ll buy the DVD.  Practically speaking, that means I’ll be buying about 98% Blu-Rays.  And I’ll probably replace some of my favorite “action” DVDs as I find them on sale.  No hurry.
It just makes me wonder what the hell they’re going to come up with next.  How long do you think it will be before 3-D becomes standard?  Man, just think of the porno business there…
The Mojo Boogie
The Steelers are in Cincinnati tonight and should be wearing white.  They wore white last week on Sunday night and I wore my white James Harrison jersey.  So I won’t be going with that one tonight; instead I’m pulling out an old reliable: my well-worn Nike white Polamalu #43.
This is the one I wore throughout the run for Super Bowl XL, including at the Super Bowl itself, plus the playoff game in Cincinnati.  The jersey was a #97 Kendrell Bell jersey when I first got it in the late 90s.  When Bell left the team, I had it changed to a #99 Levon Kirkland.  When he left, I revamped it into the #43 it is today and will stay for good.  (It helps to have a good sporting goods store in the neighborhood that can re-number and name jerseys.)
I’m staying with the white Steelers sweats and a white long-sleeve tee.   If we lose tonight, I’ll have to rethink wearing any more white jerseys.
I am ready for some football. 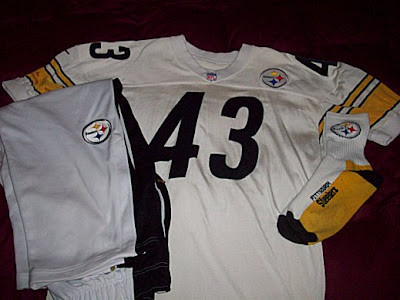 I think I do hate you for being so "productive." Geesh!

And the shoe thing would annoy me to the point that I would steal one shoe. Just one.

Those shoes are OUTSIDE the door? In the hallway? That's rude (and gross). If they don't want people wearing shoes in their apartment, they still should have the decency to keep them inside the door. Unless they have a really small apartment. And: What @burghbaby said. Take one shoe.

It's fine that you were so unproductive, because your unproductivity was balanced by the crazy productive weekend my husband had. He cleaned, he moved furniture, he put together the crib. Could you do me a HUGE favor, and be that unproductive for the next two weekends, too? Tell Pinky I'll owe her one. Thanks.

Michelle,
Love that idea… I’d go one better. I’d steal 2 shoes from different pairs; one right and one left.

Oh God… then every so often, replace a shoe and take a new one!

The downside is that there’s no way they wouldn’t know it was us. There are only 2 apartments on each floor and we’re both on the bottom (below-ground) level. No one else would come all the way downstairs…

Sometimes they have guests and there is about double the amount of shoes shown in the picture. The air in the hallway is definitely heavy on those days.

RPM,
Yes, the shoes are in the common foyer outside our apartment doors. They drive Pinky crazy. Me? I don’t care too much. I mean, I just pass by twice a day, then shut my door. I don’t give too much of a crap about what’s out there. But it’s nothing I’d ever do, that’s for sure. It’s completely rude. But at least they bought a rack for them…

For you, I’d be happy to act just as sloth-like next weekend too, and every weekend for that matter. It’s the least I can do for you, and I mean that literally. It’s the price I’ll gladly pay for a childless, house-less existence.

Did they have a lot of people over or something? I'm used to seeing a ton of shoes on neighbors' stoops for Diwali and other holidays, but usually it's just a few pairs.

Glad the Steelers won. I forget if I told you, but my mom and I laughed yesterday about how she also chose a Pittsburgh team because she was married to a fan of a sport she didn't like before, football. Daddy was a huge Dolphins fan (that was the only team for Floridians at that point), so she became a Steelers fan to piss him off and because she liked them. She never took her Steelers fandom to the heights I've taken my Penguins fandom, but she still has a soft spot for them and will watch them on Monday Night Football.

Glad your mojo worked and the Underground got to enjoy a victory!

All of those shoes belong to the guy that lives there. The shoes are there every day. I've never seen his g/f's shoes out there. Though sometimes when he has his friends over, there are double that amount of shoes.

Again, I think it would be hilarious to steal one shoe, and then keep putting it back and taking a different one.

As for your mom, people come to the Steelers from a lot of different directions. Spite is just as good as any of them.

I am quite envious of your lazy weekend. The Guy and I are still in the process of moving in together (I fear we will be in one stage or another of this process for the next 20 years), so my next lazy weekend is a ways off.

I have to admit that I couldn't keep up with the football speak, but I did get the whole "stinky-foyer-due-to-shoes-all-over-the-place" and I laughed and sort of squished my nose up at the thought of the smell. You gave a great visual!

You should get a can of the spray they use at bowling alley. Just give all those shoes a quick blast.

By the way. Waiting for your review on Blue-Ray technology. Can you really see an improvement in picture over DVD on an HD-TV? I've heard the sound is better, but is it better with the factory speakers? Or do you have surround sound? So many questions.

Mrs Bachelor Girl,
I specialize in The Lazy Weekend, lol… Like I said, no kids, no house, no yardwork, and now Pinky works weekends… I have lots of opportunity to explore a life of sloth.

Sandra,
I apologize for all the football lingo… Sometimes I forget that Canadians get the internet too. So if you just pretend I’m talking about hockey, everything should transfer appropriately. (Because I do most of the same shit for hockey, ie: dressing in particular jerseys or apparel for particular situations. Lets Go Pens!)

Bagger,
I’ll submit that idea to the group. I love it! We could even make it a chant!

Regarding the Blu-Ray, if you play a Blu-Ray disc, it’s like HDTV. Playing a regular DVD on a Blu-Ray player is a minor improvement but nothing to upgrade for by itself. I have 5-speaker surround-sound and I don’t hear much difference b/n Blu-Ray and DVD. Both are very good, even on my cheap WalMart sound system.

What I’m waiting for is an opportunity to see a real 5-Star SFX action movie in Blu-Ray… something like Avatar comes to mind. Or the next Harry Potter film.

I’m also going to have to figure out what to do with the DVDs that I replace… Go take them to a used music and movie store, I suppose. But I bet they’re getting overrun with them.

I have that exact jersey on right now. Except mine is black.

Oilfield Trash,
Ah, a man of taste and “refinement”, I see. Keep up the fight on behalf of the black and gold! As I always tell my Ratbird nemeses, “We’re everywhere!”

Thanks for visiting, and thanks for looking after Miley.