A Thanksgiving Story (Or: DON'T Pass the Mushrooms!)

Last year, it appears I never really acknowledged Thanksgiving.  But if I had, I would have told this story.
One thing about having friends for a really long time is that you have ball-busting material that goes back decades… IF you can remember it all, that is.  This story goes back to the Thanksgiving after my buddies and I graduated high school, so you’ll have to forgive me if some of the details escape me.  (Actually, that may help shorten the post, so you’ll probably thank me.)  This is one of those stories where you hope you’re going to have one kind of day but it turns out to be one CF after another.
So it’s Thanksgiving morning, 1979, and I get a call from my buddy John.  Seems he beached his Camaro on a big sand berm on the side of one of our country roads.  He needed some help dislodging the car and wanted us to come out with our Jaundice, our big Jeep Wagoneer, and pull him out.
I have no recollection of how the Camaro got up there, or where John was coming from, but I’m fairly certain he was up to no good.  That’s just how we rolled back then.
My buddy Rik and I took off and found him a couple miles away.  The car was perched up on the undercarriage, with the back wheels in the air.  It wouldn’t be a problem to attach the chain and yank the car off the berm.  As we started fiddling about to get everything hooked up, John started swearing.  Seems he just locked his keys in the car.  Or maybe that was us swearing.
Not being versed in breaking and entering a car; we decided to track down his 2nd set of keys.  They happened to be with John’s dad, who was having Thanksgiving dinner with his side of the family, somewhere in Toledo.  So off we went, into the urban jungle that is Toledo Ohio.
We found the place easily enough and John was in and out in no time, keys in hand.  We started back to the original scene, when just as I was about to pull onto the interstate, there was a big *BANG* from under the hood, followed by a great deal of racket thereafter.
Shit!  Now what?
Luckily, I had Rik and John in the car, both of whom knew their way around under a hood.  Me?  I know the big holes where the oil and washer fluid go, but not much else, so I let them dig in.
Rik immediately burned his hand on one of the hot parts.  More fevered profanity ensued.  Then it started raining.
Come to think of it, the only two times I’ve been in the car with these guys and there was car trouble, it started raining.  This was the other time.
Eventually they figured out that one of the spark plug thingies (the technical term) popped out.  They popped it back in and we were moving again.  We got back to the beached Camaro and pulled it off the berm with relative ease.  It was mid-afternoon by this time, so we headed back to my house to enjoy a little Thanksgiving.
Immediately, Dad set us up with some Jack on the rocks and we told him of our adventures.  (And that he’d better have those spark plug thingies checked out.)  Mom, who was in the midst of creating a stellar Thanksgiving Feast, sent out a plate of stuffed mushrooms. 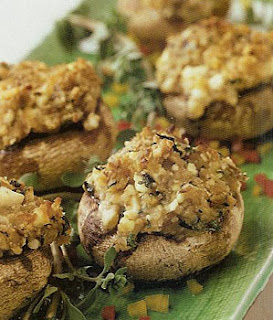 Not a photo of our actual mushrooms, but these look close.
Oh, they were fantastic… big mushroom caps stuffed with sausage, the ground mushroom stumps and assorted seasonings.  Naturally they were a big hit… at least at first.
As we passed the plate around the room, Rik went to put them back on the coffee table, and, well, missed.  He set the plate half on and half off and it promptly toppled right over onto the floor.
You should have seen us dive down there to retrieve the mushrooms.  It was like a fumble on the goal line… nothing but bodies flying and rooting around on the ground.
What, you think we weren’t still going to eat them?  We were 18-year old guys.  We didn’t care that they hit the carpet.  He could have dumped those mushrooms onto a pile of nuclear waste and we’d still try to pick out at least the big chunks of plutonium before we resumed munching.
So we get all the shrooms put back on the plate and Rik goes to put the plate back and he does the same goddamed thing again!
Mushrooms go rolling all over the floor and we go chasing after them again, thus ensuring that the subject of mushrooms will never, ever come up again, without one of us piping up, “Just make sure you don’t pass them to Rik!”
Yes, we still ate the mushrooms.  But we knew not to pass Rik the turkey that day.
The Follow-up
I don’t know if this happened on the same day, or at another holiday gathering at our house, but it fits together.
My mom used to make pizzelles for the holiday every year.  If you’re Italian, you know what I’m talking about.  If not, pizzelles are thin, waffle-type cookies made with a pizzelle iron. 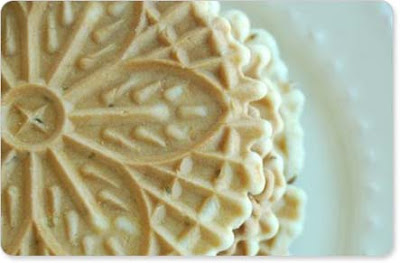 These are pizzelles.
They’re usually flavored with anise, so they taste mildly of licorice.  They are often served after dinner, to dunk in your coffee or wine.  But for this batch, Mom also made some with cocoa added, which turned them brown and gave a nice hint of chocolate.
So as we all snarfed down the plate of pizzelles, Rik pipes up, “These are really good, Mrs. Dude, even the burnt ones.”
So for the last 30 years, any time we hand Rik a chocolate cookie, we can’t help but add, “We know how you like the ‘burnt ones.’”
So as you gather today for your Thanksgiving celebration, aside from giving thanks for your family, your health and relative well-being, be sure to give thanks for old friends.  Without them, who else would remind you of the stupid shit you did when you were a kid?  And who would, in turn, tell you to shut your pie hole and pass the mushrooms? 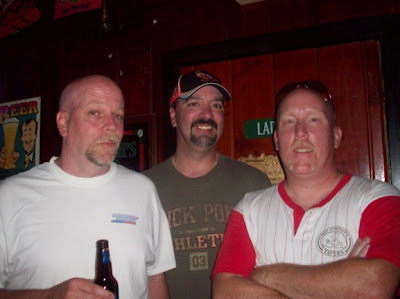 John, me, and Rik in 2008, being thankful for beer.
Happy Thanksgiving to you, my friend.  May your legs be plentiful, your thighs be juicy, your breasts swell pleasingly and you get all the stuffing you could want. 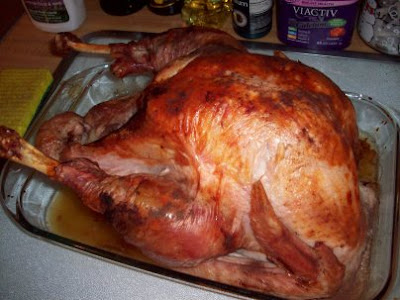 Love it!! The mad dash for the 'shrooms prepared by your mom... That sounds like a bad joke in hillbilly land but... OK, I'm leaving that alone :)

Finally! A comment, after 2 entire days! I thought maybe this post was invisible to the human eye. Then again, maybe those that regularly visit here actually have lives and families...

No, these shrooms were not quite that exotic... just good old, store-bought mushrooms. Now the Jack, on the other hand...

I drop no schroom before it's time ... Guess what I made for Turkey day at Papa Johns ???

Dude, it couldn't have been mushrooms, or else the very fabric of the universe would have torn in two.

So funny! II haven't been online 'cause I've been glued to the tv, watching football and bad reality shows, and loving the heck out of it! :) The family stuff on Thursday started a lovely long weekend with just the hubs.

That story is hilarious. And, doesn't it always rain, or the other car runs out of gas, or something when that stuff happens? Weird. It's like it all piles up or something. When you started talking about pulling the car out, I remembered a night that makes me cringe to this day...

My brother and his friend liked to go "mudding" (oy) in their tiny jacked-up trucks, and his friend's truck got stuck, so we were all out there (I have no idea why I was included in this rescue) in the middle of this field of mud near a concrete bank (hel-LO?), and they're hooking this monster set of chains and a giant hook to each other's bumpers/frames/whatever, and *SNAP* the chain breaks. The massive hook crashed through the back windshield of his friend's truck and would've taken his head out if he hadn't had bucket seats with headrests. To this day, I get nervous when guys talk about hooking vehicles together or pulling something. *shudder*

Cristy,
At that point, we'd had to pull a number of cars before, so I was pretty comfortable with the drill. Ya have to pull out E-A-S-Y, not like you're in a SUV commercial.

HA! Now that's a sign-off line if I've ever read one!

Feel free to use it at your next fancy Thanksgiving or Christmas feast!

Isn't there a 5 second rule at your house? I hear that's the standard. At our house it is more like 15 seconds.

A little dirt never hurt anyone. And it builds immunities!