Yeah - What HE Said

Last Sunday (11/7) there was a letter to the editor in the Baltimore Sun that made me sit up and take notice (and clip it out).  It’s the kind of thing that eloquently said the things I’ve been thinking but have been unable to put it in such clear terms.  The writer, Mac Nachlas, goes at our collective culture and our “I want everything now, at no cost or inconvenience to me” attitude.
If I may excerpt:
After devoting long minutes to careful analysis of Tuesday night’s election returns, I now know what Americans want:
We want roads and bridges that are always in good condition but do not require tax money for upkeep.
We want world-class schools with teachers who are so dedicated that they will work for minimum wage.  (Note the best one should be in my neighborhood.)
We want 60-inch plasma TVs that cost $200 and are produced by workers in Ohio making at least $30 an hour.
We want our military to win every war, every heart and every mind, everywhere, at no cost in lives or money.
We want cheap, clean, efficient mass transit that goes through someone else’s neighborhood.
We want no-fat, triple-decker hamburgers that are good for you and taste great.
We want fast, efficient, friendly government services provided by clerks who work happily for free.
We want “clean” coal and domestic crude that dies not produce pollution or require digging or drilling.
We want SUVs that get 100 miles per gallon and produce jobs in Detroit.
We want Social Security benefits to go up and Social Security taxes to go down.
We want cheap labor from legal citizens who don’t mind living in poverty.
We want clean drinking water and pristine parks and the right to dump anything, anywhere.
We want colleges that are inexpensive and not too hard, but produce world-class leaders.
We want football where every hit is brutal but no one gets hurt and baseball where everyone hits 40 home runs but no one uses steroids.
We want government to deliver all these things – then cut taxes and then cut taxes some more.  Mostly, we want what we want and we want it now.
That, my friend, is our country in a nutshell, as evidenced by the last election.  You can read his conclusion here. 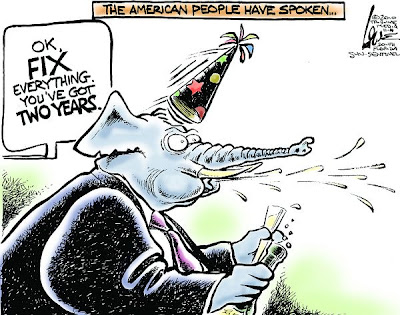 Now getting back to my regular bullshit, please take the time, if you haven’t already, to check out my guest post at Musings of a Confused Woman.  I made sure it’s extra hilarious.
Miley is a regular commenter here and just because she’s taking a short break doesn’t mean she doesn’t want any more visits.  It would also be helpful if you could log in from another country, to bolster the country count on her hits tracker.  So get right on that, will you?
Posted by bluzdude at 11:28 AM

Mac Nachlas is probably the only semi good looking dude in Baltimore. And he is absolutely right. We are a nation of spoiled, self indulgent, over fed, undernourished, short sighted, long winded whiners. No one has asked us to sacrifice in 60 years. Many of us never have, never will.
Paul Krugman, Nobel Economisc Prize winner last year, says, "America is now on an unlit, unpaved, road to nowhere." But we all have our GPS.

And that doesn't even include the Ravens fans...

Yep, that about sums it up.

Recently, I was subbing for a seventh grade social studies class. A couple of the kids, clearly repeating what their parent say, were complaining about taxes. I told them everything costs money. If you want better whatever, the $ has to come from somewhere.

I hate high taxes and do think PA is screwing up on many accounts, the liquor stores not the least of which and the pension plans probably the biggest problem, but I also recognize that you can't fix the roads and do so many other things without more money.

Facie,
Yeah, that's the thing. Everyone wants all the services this country provides, but no one wants to pay for anything, or have anything in their neighborhood that helps someone else.

Great writing! That's it in a nutshell.

That, it was. In the same nutshell.

I think I can help with the "blog in from another country" thing...I'm off to check out your post.

Judie,
I thank you, and your fellow LSU fan Miley thanks you.

Sandra,
Oh, you're taking the easy way out... you get to blog from another country from right there at your desk. Or sofa. Or from where ever Canadians blog.

That is a great letter to the editor. He sure hit the nail on the head. We are a nation of spoiled children who want to behave in whatever manner we deem appropriate with no consequences whatsoever. We want all our country's problems fixed, and fixed now, with no sacrifices on our part. It's maddening.

Raven,
It IS maddening. It's like, say, with children of a split family. It's like in 2008 they decided they didn't like living with Daddy any more and went to go live with Mommy. Then the found out Mommy had rules too, so now they want to go back to Daddy.

we are a selfish nation. It's sad.

This guy was spot on. Spot on.

I've been alive long enough to remember watching JFK tell Americans, "Ask not what your country can do for you. Ask what you can do for your country." And we love it. Because we were actually patriotic back then.

What the hell happened? No one gives a crap about the country anymore. And all this tea party I'm-more-patriot-than-you-are BS makes me empathetic with the guy who crawls to the top of a bell tower with an Uzi and opens fire.

Oops. Did I say that?

Jayne,
In this day and age, public service entails chipping in for new bleachers for the high school football team, and opposing every soup kitchen or rehab center proposed for your neighborhood.

JFK would be appalled.

The Teabaggers want to feel that sense of community again, but without actually having to do anything or be inconvenienced.

To quote a certain msnbc personality:
"Day 13 - Okay, where are the jobs?"

Love the excerpt and the cartoon. So exactly the way I feel, too. Guess we'll see.

Cristy,
Yeah, we all know there aren't going to be any jobs in the next two years.

The Republicans are going to continue to thwart any progress, take credit for anything that goes right and blame the Democrats for everything that's wrong. Then they run in 2012 and hope they can sway the middle class as easily as they did in 2010.

One of the reasons I voted for Obama is because he was the guy who said: Things are broken, and I want to fix them. And it's going to take time. I don't even think he realized how much time, and that he's working with the broken system. He knows it now, boy howdee.

I like that letter, but I especially like the cartoon. If Obama and the Dems were held accountable, I sure hope the elephants are, too. Of course, if the electorate was really paying attention, we wouldn't be sitting on the precipice back to the future.

RPM,
I think Obama underestimate the extent to which the Republicans would go to obstruct any appearance of progress on his part, right down to voting against the very ideas they supported in the past.

It's a shame that people were not paying attention to that.

I have a co-worker who always yells at Republicans for wanting small government but also demanding smooth roads, clean water, etc. But my dear old dad, who's staunchly conservative, wants to live on 1 acre of land, grow all his own food, and never leave his driveway. He really ruins our fun.

Mundane,
Your dad can do that regardless of who is in power. The rest of us need shit done.

That is a great letter - and is so very true. I have alwasy said that many of the folks who like to spout off about how "freedom isn't free" often forget that nothing else is, either.

Gina,
Yes, they love to spout off about Freedom Isn’t Free, to justify the massive Defense budget, but spent little else on what it is they’re defending. Just as long as they’ve “got theirs” anyway.

As sung in “Team America – World Police.”
OK, it’s funnier when you hear it…