My Election Day started off with what seemed to be a bad omen.  The first song that came up on my MP3 as I set off to vote was “Hells Bells.”  I’m surprised it wasn’t “Money Talks.”  Either way, we certainly seem to be on the “Highway to Hell.”  /ACDC.
I rolled up to my polling place by about 7:15 AM, and lucky for me, there was no one out there stalking the entrance with campaign literature.  That made me very happy.  I hate having to run that gauntlet.
“Just get the hell out of my way so I can get in and out of this place.”
And anyone that gets their mind changed (or made up) based on a handout outside the polls should be banned from voting in the first place, under the little-known “Twit Clause” of the Constitution.
Anyway, there was no line at all at my polling place, which I considered to be both a blessing and unsettling.  Even at opening, for the previous election, the place was crammed.  I know we don’t have the glamour of a Presidential election this time around, but it’s every bit as important.  On the bright side, I got in and out within 5 minutes.
And the best part: They had “I Just Voted” stickers!  They’ve never had those before and I’ve always secretly envied those that got to walk around at work with those stickers.  So this time, I didn’t have to write it in crayon on my shirt. 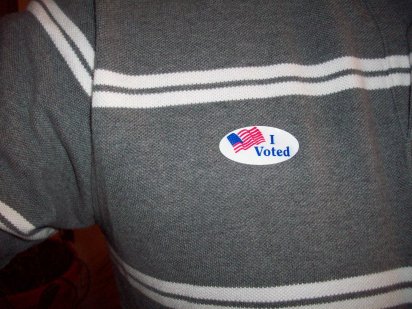 The stickers also help identify potential vote cancellations.  I usually choose to cancel out my boss’s vote because while we get along fine personally and at work, we are polar opposites politically.  In fact, he was talking about politics on the phone today and I had to put my headphones on, or else I know I’d find myself yelling stuff over the cube wall.  Sometimes it’s good to put your head in the sand.  Helps keep you employed.
I mostly covered everything I have to say about the election in yesterday’s post and in the comments.  Now I’m going to start getting into following the returns.  If anything sticks in my craw, I may update this post.
Or, if you don’t see any updates, I may have just drank a quart of bleach and went to bed.  Call 911.

Update: 9:30 PM
Not a lot of suspense tonight; it's a Republican avalanche in the House.  All networks (except ABC) are projecting it already.  Dems are keeping a couple of Governorships and a few Senate races.  Here's to hoping that ABC knows something that the rest do not.  But I'm not holding my breath.

Here in Maryland, they were never really in jeopardy.  Our Governor O'Malley and our ancient, gnomelike Senator Barb (Mikulski) are projected to win easily.  Maryland is a very BLUE State and that's not changing any time soon.

In one mild outbreak of sanity, Teabagger wing nut/witch Christine O'Donnell got trounced in her Senate bid.  One can only hope that Nevada sends Sharron Angle to the same fate.  She's like a less cutsie and much meaner version of O'Donnell, but just as misinformed.
Posted by bluzdude at 7:45 PM

I had the luxury of voting yesterday. No lines and no one telling me I needed to vote a certain way. It was heaven. And on the up side, we also had stickers. One of which is still on my sweatshirt.

I considered early voting, but getting up and out early on one day is just as good as another. I like getting the full experience. And even if I'm late to work, it's the best excuse going...

But I'm really happy about that sticker. Sometimes it's just the simple things...

"I didn’t have to write it in crayon on my shirt." that is so funny. Like me on the day I gave blood and posted my sticker on my blog. Yesterday I saw a guy walking down the street with the same sticker, I was half-ass tempted to stick my head out the window and yell "big fucking deal!"

What is it about stickers? If they advertised "Vote and we'll give you a free sticker" and they'd have oodles and oodles of people waiting in line.

It's my experience that people will always turn out for free stuff, whatever it is.

Apparently some polling places give away food. Why can't I vote there?!

For me, the biggest surprise at the poll today was finding out the two candidates I had been researching for US rep were not even in my district. How could one be such a dumbass, you might wonder? Many months ago, when trying to find my candidates online, I listed the address of my neighbor across the street (I have this big brother paranoia, which apparently does not apply to blogging). I am afraid that twit clause may apply to me. :-(

I voted, and have to say, those people that have to sit there and look in their damn "who is who" booklet while voting, needs to do their research before going. Honestly, how hard is it people.

Facie,
I had a similar problem in the 2004 election when I showed up at my usual polling place and they didn't have me on record any more. (I even had my card with me.) There was a long story, but to summarize, I thought I lived in Baltimore County but in fact live in Baltimore City, which are 2 distinct jurisdictions. Turns out the dividing line is the road directly behind my back patio. Across the street lies The County. Well, I'd declined a Baltimore City jury summons the prior year, because (I thought) I didn't live in the City. So they scrubbed me from the voter rolls, hence my being unable to vote in the place I'd been voting all along.

Dazee,
I always look over the sample ballot and get my votes straight, but I've never had to take it in with me. It's never been that complicated.

Although I do admit that in a lot of the minor city offices like Clerk or Registrar of Wills, people run unopposed.

Rod voted by mail, but there is nothing like walking into the voting booth with a black fine-point marker and filling in those little ovals. Just like taking the SAT. Plus, I wanted that sticker!! Actually, I wanted to make sure Keil voted, so I bribed him with lunch first.

If those campaign signs all over the city don't come down by the weekend, I am writing a letter to the editor! There is nothing more trashy than weathered campaign signs standing on one leg on the side of the road for months on end. There should be a law against it!

We have fancy-pantsy touch screens here in MD. I just hope they work.

I like looking at the actual vote totals and knowing that one of those is mine. It's like my own personal election molecule.

I have the same problem with co-workers. Except I disagree on politics with about 95% of them. Needless to say this morning I have my music turned up very loudly. Of course all the Republicans won in this state, except for our mayor! Even the Republicans hated the Republican candidate for mayor. Small victories right?

"In the clearing stands a boxer...' Harry Reid wins again! Ready for another round.

'wing-nut' YES 'witch'??? Surely you jest. Witches are wise women of integrity, intelligence, intuition and skill. Any resemblence or connection to Delaware's loser is impossible.

My favorite part of voting: No judges. It is so insane that the public has to vote for judges. They shouldn't have party affiliations. How do we know who's best? Shouldn't lawyers vote on this? Anyhow, no stupid judge elections this time around.

Well, it turned out much the way I expected it would, bluz. Look at it this way---We are going to have lots of fodder for posts over the next few years. I'm laughing my socks off!

Jessica,
I guess it depends on how powerful your Mayor’s office is. In some cities, all the power is in City Council and the Mayor is just another player.

And yes, I have my headphones on again this morning. It’s going to be one of those days.

Mary Ann,
Of course I jest. I would have liked O’Donnell better if she WAS a witch. (Even if that would have made her bosom the touchstone by which to gauge coldness.)

Bagger,
We still had to vote for judges in MD. I hate that because unless you’re a court reporter or something, you never know anything about them. They don’t advertise, so all you have to go by is their name and gender. So I usually just vote for the female judges so that if I have to throw myself on the mercy of the court, I’ll have a nicer landing spot.

Cher,
Very true. Hostility and anger make for much easier post writing, for me, anyway. Piss and vinegar is my favorite dressing, with a side of vented spleen.

Sadly, Shreveport is juuuuust small enough that the lines (or lack thereof) at the polls is never an indication of voter turnout. The only time I've ever seen them packed is for presidential elections.

MBG,
It also tells me that Shreveport has enough voting places.

Ohio is notorious for influencing the vote via controlling polling stations. For the 2004 and 2008 elections, the State Government and Board of Elections was under Republican control, so they kept the number of polling places in urban areas (read: likely to vote Democratic), to a minimum, causing huge lines, delays, and panic when polls were closing with people still in line.