After the week this has been, I’m tired of even thinking about politics.  Luckily I have some new stuff to talk about.
We had a “Team Building Event” at work today.  This meant we got to leave work at noon and go to a local establishment for some food, drinks and bowling.
I’ve probably only been bowling once in the last 10 years.  When I was a much younger dude, I LOVED bowling.  When I was in Jr High in Columbus, we lived within bicycle distance of a big bowling alley.  When I was bored (and had some allowance money in my pocket) I’d go down to the bowling alley by myself and roll a few games.  It seemed like such a “grownup” thing to do.  I began tracking my scores on this little card they’d give out.   (Yes, even then, I was born to keep stats.  Sadly, spreadsheets hadn’t been invented yet.)  I thought I was starting to get pretty good, you know… for a 9th-grader.  All I did was roll a “straight-ball”.  I never tried to hook it; just throw it down the middle as hard as I could, like I’d seen my Grandpa do before when he used to take us bowling.
I was so excited, then, when Dad took us kids out for bowling one Saturday.  “I’d show him,” I thought.  He’ll be so proud of how well I do.
Wrong.
It’s not that he wasn’t proud, but the thing was that I was doing it all wrong.
“If you’re going to bowl, you’re going to learn to do it right!” he said.  He began showing me how to let my hand come up the right side of the ball and hook it, as opposed to my method of opening my palm toward the pins from under the ball, and coming straight up from behind.
It was all very good in theory.  In reality, I couldn’t hit a pin to save my life.  My little brother was kicking my ass.  Hell, even my sister was hitting pins and she could barely get the ball down the lane.  I was steaming mad.  Why wouldn’t he let me go back to what I was doing and knock some pins down?  Pissed me off the rest of the day.
But I kept going back.  I continued my visits to the bowling alley and worked on my new form alone.  It was all good.  I got better.  And then I knew how to do it right.  All I had to do was build up a little arm strength so I could throw a bigger bowling ball.  Eventually I became a big, strapping teen and began borrowing my Dad’s 16-lb ball.  Felt like hot shit when I could strut into the bowling alley slinging my own ball, as opposed to those crappy-ass house balls.
In college, I took a bowling course for PE.  That helped me a lot with the strategy for picking up spares.  I always had such trouble with that last pin on the right, so I learned how to start way to the left, throw the hook and let it bite late and drift right into the pin.
I think the best I ever averaged was 204 for a 3-game series.  My high score for a game was about 250, I think.  I used to sub in my buddy Rik’s bowling league once in a while, but after that, I never bowled much any more.
Quick Semi-Related Note:  Rik used to work at our local bowling alley in Toledo.  He was one of the pin monkeys that stayed back there to unjam the machines and whatnot.  He told me he and his co-workers used to spot the pretty girls from back behind the pins and when the girls took their turns, they’d stuff little notes into the finger-holes of their bowling balls before they got sent back.  Helped break the ice, he said.  I always thought that was a cool idea.
So when it came to bowling today, I was a little more apprehensive about it than I used to be.  My shoulder has been giving me some pain since July.  I don’t know if it’s arthritis, which I suspect I’ve had in my collarbone area for over a year now.  This problem is definitely within the shoulder joint.  I don’t know if it’s a ligament or a rotator cuff or labrum or arthritis, or whatever.  Feels a little jangly in the socket.
I’ve been trying not to put stress on out and to avoid awkward twisting motions.  I know I’ll eventually have to have it looked at, but I’m hoping to avoid it until next year when my Health Care Spending Account reloads.
It sucks getting old.
Anyway, regular bowling would have been out of the question.  But today, we reserved the “duckpin” lanes.  Duckpin bowling is a Baltimore thing.  I don’t know if it exists anywhere else.  I’d never heard of it in Columbus, Cleveland, Albany, Pittsburgh or anywhere else I've been.
Duckpin bowling is just like regular bowling, only in miniature.  The ball is roughly the size of a softball, I’d guess it weighs about 5 lbs, and the pins are about a third the size of regular pins.  The lanes are the same dimensions.
The rules are the same except that you get three shots instead of 2.  Strikes and spares are the same but it only counts as a spare on your 2nd shot.  If you need a 3rd shot, you only get the total of pins knocked down, without the scoring bonus. 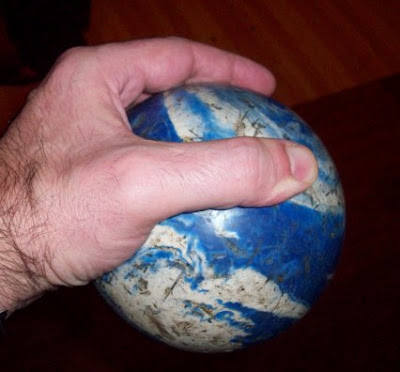 This is a duckpin ball.  And yes, I have more than 2 fingers.  The rest are on the other side of the ball.  The shot does make me look like Lobster Boy, doesn't it? 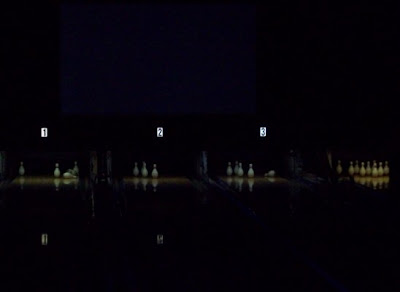 These are duckpins.  If I was thinking, I’d would have gotten a shot with a lane of regular pins included, so you could compare.
After almost 13 years of living here, this was my first time trying the duckpins.  I must say; it was fun.  Completely frustrating; but fun.  I just rolled my straightball so I wouldn’t tweak my shoulder.  Also, I didn’t want to spend the in-game time trying to figure out the curve.  I figured I’d just go up there and wail.
OK, maybe not wail it, but just do the best I could.  I can’t complain though.  I tied my boss for high score, with a staggering 87.  That’s right… 87.  Out of 11 bowlers, most of them native Baltimoreans, that was the best of the lot.
No matter though… we had a blast.  It’s so much fun leaving of the work environment and just getting out to play.  People really get to let their spirits shine once they escape the cube walls.
But it’s back to the grind tomorrow…  And I’ll get to torment everyone with all the pictures I took of their bowling form… 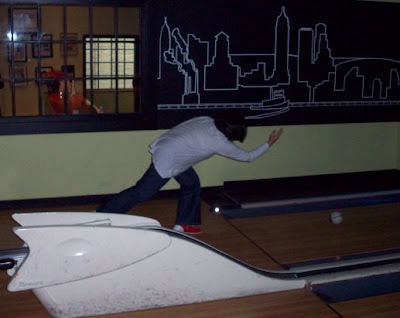 I took blwoing for a PE class in college. I loved it! and I got pretty fair at it as well. MANY years later, my oldest son and some of his friends wanted me to take them bowling. It never occurred to me that I would play as well. Ihad not had a bowling ball in my hand since college! When they told me it was my turn, I blanched! But wanting to be a cool mom, I grabbed a ball, drew it back and promptly flung it backwards! They were falling down laughing!!
Since then, I have gone bowling several times with my youngest son, and have thoroughly enjoyed it! I couldn't do it on a regular basis, because I have a "bad shoulder" or a "bad elbow", or "bad knees," which happens to people my age eventually. It was fun while it lasted, though!

Miniature bowling! That's hilarious. Are there finger holes on those things?

Pittsburgh used to have a duckpin bowling alley in Edgewood. I've been — it was a blast. I have no idea if it's still there.

My dad used to make me cry trying to "teach" me how to bowl. He wasn't a good math tutor, either.

I've taken the kids bowling, and it's been fun. I'm very much about "no pressure; have a good time" with them. If they want to learn the proper way to do stuff, I'll sign 'em up for a team!

Judie,
You’re just lucky you misspelled it the way you did. It almost looked like something that would completely misrepresent what you intended.

Too bad they don’t have duckpins in AZ. It’s much easier on the shoulders, knees, feet and everything in between.

Jessica,
No, there are no finger-holes in the ball. You just grip it and rip it.
(Before we left, I warned everyone to watch out because I was going to bowl “overhand.”)

RPM,
It’s hard to teach kids to bowl “correctly” because they don’t usually have sufficient wrist strength to come up through the ball and give it the spin. Although nowadays, using a Wii would help with the “theory”.

I won’t fault my Dad for teaching me to bowl… it served me well the rest of my bowling life. But yeah, I was pretty pissed at the time. Isn’t that always the way with kids?

Kudos on being the first to know about duckpins!

Sorry PD... I have absolutely no idea. This was about 36 years ago.

Would it make you feel better if I told you I used to go to United Skates of America to rollerskate, when I lived in Columbus?

The name of the bowling alley wasn't nearly that catchy. (Or else I'd have remembered it.)

What a great good break from the cube routine. Your guys should do this once a week, if just to take a walk around the block. Try writng down what you see as everyone takes the same walk. The differences in observation and perception are amazing, enlightening and fun.
Your Grandpa was a unique, bowled OVERHAND! Then ran back to keep his own score. Hilarious.

Even in his 70s, Grandpa could really wing it. The pins would just explode whenever he made a decent shot.

The rest of the world has such interesting bowling games - first I found out about candlepin bowling, and now duckpins! Who knew Louisiana was so bowling-deficient?

Mrs Bachelor Girl,
Yeah but you still win out because you have fanboats. (Even if it’s just in my mind.)