There’s a great article about Sidney Crosby in the latest Pittsburgh Magazine.  In it, there’s a story about Sid staying long after practice to help defenseman, Kris Letang, work on his shot from the point.  It pays off the next game when Letang bangs in the game winner in overtime.  The article intimates that Sid is Letang’s best friend.
I immediately had to send the link over to Sitcom Kelly, because once she captures Kris and puts him in her basement Pit, Sid may come looking for him.  I suggested she prepare another Pit just in case.
I think all this Pit talk is getting to Sitcom Kelly… she recently had a dream that she was out somewhere and Letang has “his people” watching her.  She had to explain that it’s all a joke and the she really didn’t have the energy/enthusiasm/attention span to keep anyone in a Pit.  She was happy, though, that she got to meet him (in the dream).
I told her that’s how the madness starts.  She starts dreaming about him and The Pit, and next thing you know; she can’t distinguish between what’s real and what’s a joke.
I wonder what her co-workers will think when she starts showing up with dirt in her hair.
The Mojo Boogie
Today’s game gear was based on the Steelers opponent, the Oakland Raiders.  It’s opposite the Ratbirds game so it won’t be on TV, so I had to go to Jilly’s, my local sports bar.
In years gone by, coughthe70scough, the Raiders were mortal enemies.  The years weren’t kind to the Raiders as they spent far more years sucking than being competitive.  Then last year, they came back and stuck it too us good, right there in Pittsburgh, scoring 3 TDs in the 4th quarter.
It’s time to break out the hate so I rocked the 1975-era Jack Lambert throwback, complete with Super Bowl X patch.
This was a bit of a risk for me because for the 3 games I’ve already seen at the sports bar, I’ve worn Steelers polo shirts and they’ve won.  But what I’m learning this season is that there is no consistent mojo tied to one shirt.  Note that I never wore the same polo twice.  I went way out this time just by wearing a jersey at all.  But in a nod to consistency, I did wear one particular hat each time, so I wore it again today. 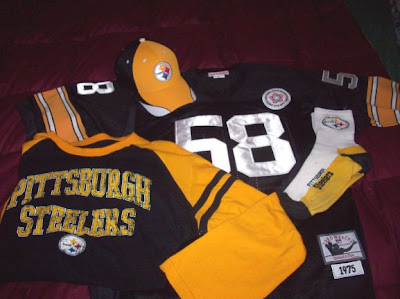 And the result of all that scheming?  Steelers crush the Raiders 35-3, in the most uncomfortable romp I’ve seen in ages.
Why uncomfortable?  The fucking penalties!  Now, I’m not usually one to complain about the refs… that’s what losers do.  But Jesus Christ!  The Steelers had 14 penalties for 163 yard, including a punt return and interception return for touchdowns called back, versus 7 penalties for the Raiders for 55 yards.
Some of the calls were legit, for example Willie Gay holding THE KICKER on the punt return.  But so many of the others were total phantoms.  And if they are going to call holding that closely, it has to be for BOTH teams.  I refuse to believe that the Raiders, who have had the worst reputation this side of the Ratbirds for the last 40 years, played it all that clean.  Half of the calls against the Raiders came late in the game, during garbage time.  None were particularly meaningful.
But enough about the calls.  The Steelers rocked the house, and the Raiders.  I had to shout down one idiot Ravens fan, who after seeing a scrum on the field, started bellyaching about how it must be those cheap-shot Steelers.
The replay showed then showed how after a TD pass, QB Ben Roethlisberger ran by D-lineman Richard Seymour and got totally jacked upside the head, 15 seconds after the play was over.  It looked to me like Ben was trying to get around him… maybe he said something, but then Seymour whirled around and just palm-heeled him right up under the mask.
I went apeshit in the bar… “Oh yeah, what a thug.  Ben totally beat that guy’s hand with his jaw.  What a low-life…”  I went on with some more choice observations, loudly, but I don’t really remember the rest.  I can tell you that I didn’t hear a peep out of that Rattie jagoff for the rest of the game.  Typical.
Posted by bluzdude at 6:23 PM

And I love the Pens and Crosby. I am still a little pissed at him for the game winner in the olympics, but I still like the guy.

Trash,
The Steelers overcame a lot of setbacks at the hands of the refs, as well as their own. The D was just smothering. They exposed the Raiders as a team that's compiled their record at the expense of other bottom-feeding teams.

Bluz, Rich and I were driving back from North Carolina during the game so we listened on the radio. Tunch almost went through the roof about the officiating. I mean, if it wasn't so serious, this might be funny. Who controls the officials, anyway? Today was absurd.

I find it amusing that 99% of the flags were against the Steelers, and yet it was Seymour who "ejected himself from the game". He'd started a scrum behind the play a few minutes prior to his ejection. Be interesting to see how this plays out Wed, if the commish hands out fines and/or suspensions. And yet, we overcame and won. Which is what good teams do.

If anybody flathands Rothlesburger, it should be me. How dare that Raider goon take my shot.
Sitcom Kelly will need twice as much ziti if she corrals Sid. Maybe he likes broccoli better. A perfect person would prefer the greens.
That was indeed the craziest game in many Sundays. Let's play Penalties!

I really have nothing to add here.

Cher,
Again, I hate to be the guy bitching about the refs but the calls in this game were just atrocious. I have to wonder what the agenda was, because there is no possible way that the Raiders would hold up under the same scrutiny.

DG,
Given what the league has done on hits that were actually part of football plays, I don’t see how Seymour doesn’t get a fine and suspension. You just can’t throw a haymaker at the QB after the whistle.

And you’re right… good teams overcome the calls. That’s what I tell the Rattie fans all the time. But we were lucky we were playing a team as over-rated as the Raiders. A performance like that against other league-leaders like the Jets or Ravens… well, 160-odd yards are a lot to overcome. And we already got carved up by the Patriots without the penalties.

Mary Ann,
If you’re going to smack Big Ben upside the head, you’d better bring a step-stool. I don’t think you have the hops any more.

I bet Sid eats tons of broccoli and doesn’t even fart. (And if he did, glitter would come out.)

Mrs Bachelor Girl,
Yes, “Go Steelers” is appropriate for any occasions… births, weddings, funerals, and everything in between.

There is a reason why I allow Claire to wear her Sidney Crosby shirt 6/7 days a week. He's someone to look up to.

Cassie,
You may have to get her a home and away version.

So weird to watch the Steelers at 11:00 in the morning in Phoenix, but that's what I was doing. Until at 28-3, that is, when CBS switched to the Jets/Texans. Oh well, I saw most of it. It was much better to watch an ass-whipping. Especially while the local Cardinals were getting blown out on Fox.

True. True. But I don't need hops to kick his ass. That's about the right height for a good swift boot in the pooter. Then I can run away and he won't even know what hit him.
Yes. Sidney probably pees ginger too. And the glittter smells like POLO.

Bluz, did you wear clean socks?

Bagger,
Yeah, that time shift can really mess with your head. You didn’t miss much after the cut-away… well, other than the “Smack Heard Round the World.” But I’m sure you saw it on the highlights. Overlooked in that whole affair was a pretty good catch by Sanders for the TD. He’d better stack some of those catches up, too, if he wants to earn that #88 he’s wearing.

DG,
That’s unbelievable. Maybe they’re only looking at it as a player safety issue and a smack is much less problematic than getting cold-cocked during a play. I think they’re wrong to overlook disciplinary issues. Remember when Joey Porter and William Green got tossed for a whole game for fighting in pregame? All this cost Seymour was a quarter. This is BS.

Mary Ann
Can you get your foot up that high? Your “Rockette” days are pretty much over. Or does the yoga keep you sufficiently limber?

Judie
You are obsessed with my Steelers socks, aren’t you? No, they did not get washed because they don’t need it. There is no activity undertaken while wearing them, other than sitting around watching TV. I put them on before the game and take them off right afterwards. I’ll wash them when the season is over.

Since I live in Arizona and only watch LSU and the Saints, when you write about your sports teams, I alwasy want to comment because, and I quote, "comments are like 'crack' to a blogger...' and I am trying to be supportive. I won't mention your hardly worn socks again, Bluz!

Well then that's really very sweet of you, Judie. I greatly appreciate your support, even for posts that you don't know much about.