When we last left our hero, he had been rushed to the ER, comfortably sedated, and diagnosed with a 7-mm kidney stone.  We pick up the story as he is admitted to the hospital for the night and wheeled up to a private room.

An orderly wheeled me up to a bed in the hospital about 11 pm.  I noticed how eerily calm the place seemed, after hours.  It was like the beginning of a horror movie.

The room was small, naturally, but nice enough.  There was one chair, a kind of non-reclining easy chair, but it wouldn't have been very comfortable for Pinky.  We made the right call by having her return home.  Not that she slept much that night anyway.  Within minutes, she had emailed me a link to a medical website about kidney stones.

The first thing I wanted to do was see what this thing might look like.  Like I said in the Part 1 of this story, when they said “7-mm,” I was hoping that was length and not diameter.  Later, they told me that it was, in fact, diameter, so I figure my stone looked like the one at the top of this diagram. 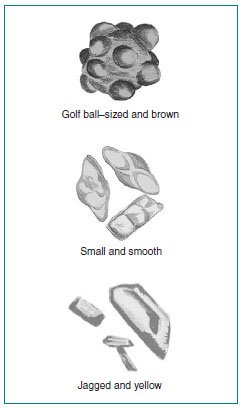 That thing reminds me of the Star Wars “Death Star.”

I was happy that the hospital had wi-fi service available for guests; that helped me keep in touch with various friends and family, as well as allow me to Live-Tweet my hospital stay.

By the way, I highly recommend Dilaudid as a pain killer. Now I can stop clawing at the bed railings. #KidneyStone
— bluzdude (@DarwinfishBluz) April 4, 2013


Looks like I'm going to be called upon to pass a 7mm kidney stone. Just call me a Pee Shooter.
— bluzdude (@DarwinfishBluz) April 4, 2013

I love hospital slippers.  They almost make the trip worthwhile.  This pair has the tread on 2 sides, so if I’m careful to rotate which side is “down,” I can get double the life out of them!

I might have tried to sleep a bit sooner, but I knew they had me scheduled for my next shot of Dilaudid at around 1:15 or 1:30, so I figured I might just as well stay up, since they’d have to wake me up anyway.  (They couldn't just shoot it into my IV because they have to scan my bracelet like I’m on a grocery checkout counter, and then have me repeat my name and date of birth, so they can be sure to bring me a cake if it’s my birthday.)

No sense getting woken up for that, so I played on my iPad.  So after they dosed me again, I decided it was time to try and sleep.  And you’d think that would be easy, what with all the heavy drugs coursing through my body.  But there were two problems.

The first problem was the bed.  It wasn't that it was uncomfortable; it was one of those auto-beds, that self-adjusts to however you position yourself.  It was actually very comfy.  The problem was that it continues to self-adjust every 5-6 minutes, whether you move or not.  I’d be lying there and then it would spring to life; the mattress would undulate for about two seconds, vibrating all the while.  It was like being strapped to a soft, body-sized cell phone.

This went on ALL NIGHT LONG!  They said everyone complains about it but there was no way to turn it off.  Of course, the Customer Service Manager inside of me was just going ballistic.  I mean, I understand that it’s good to have the bed shift so that you don’t get bed sores and stuff, but is that really relevant for a single overnight stay?  Somehow, I manage to survive a night in my non-movable bed without damaging myself.  It’s not like I was in a freakin’ coma.  So there it was… every time I’d start to drift off, the bed would shock me back awake again.  And once I was awake, I could pay attention to the other problem…

I don’t know who else was in the hospital that night, but it sounded like a Crazy Old Man Convention.  There was one poor old guy across the hall, who probably had dementia and was clearly terrified.  Any time they went in to see him, he’d yell, “Help! Help! Help! Oh God, help me!  Stop! Stop! Get it out, get it out! Help!”

I could hear the nurses trying various means to calm him down, but neither reason, nor force, nor threats could quiet this guy.  Now, I’m a reasonable human being and I had as much empathy as anyone for this poor soul.  But after a couple hours of this shit I was ready to go in there, dragging my IV, and knock him out with my shoe.  (And it was a tennis shoe, so it would have taken a while.)  But I was like, “Oh please, just take whatever is in him, out, or put something else in, like some of the drugs you’re giving ME…”

There was also another guy on the floor who did quite a bit of yelling too, but I couldn't make out very much.  So between the yelling and begging and my possessed hospital bed, I didn't sleep worth a damn. When the nurse came in at 5:15 to give me my next dose of Dilaudid, she apologized for all the commotion.  I said, “Please tell me those guys aren't passing kidney stones!”

Lucky for me, they weren't.  I was hoping this wasn't a peek at a little slice of my immediate future.

I managed to half-doze a bit until about 7.  When the nurse came in for my 8:15 medicine, I told her to hold off.  I wasn't in any pain, so I figured why rush the meds?  As it turned out, the pains didn't return.

The rest of the morning was mostly waiting for the urologist to show up and decide what they wanted to do with me.  I was trying not to get impatient, but I was starting to get pretty hungry (after having lost my dinner) and had been pretty thirsty for some time.  It’s weird when they want you to pee, but won’t give you anything to drink.  The saline drip just wasn't cutting it.

Finally, Pinky, (who had returned) went out to “raise awareness” of our plight.  She’s pretty good at that kind of thing… the doctor appeared about 15 minutes later.  That’s when he answered my “diameter” question.  He said that when they did the CAT scan, the stone was 2 cm from the bladder, and because my pain had suddenly gone away, they were confident that it was now in the bladder.  (And I was confident it hadn't gone any further, because I’m sure I’d have noticed.  I imagined it would pass with one of those cartoon gunshot “ricochet” sound effects.  PTTOWWW!

The good news is that they wanted me to pass it without surgery, which I was all for.  I figured, if it gets bad, they’ll give me more Dilaudid.  They were going to keep me another night, but in the meantime, I’d be allowed to eat and drink.  Halleluiah!

I was concerned about not getting any sleep again… the old dementia guy was still carrying on… so I did a little recon and decided that right before I’d try to sleep for the night, I’d unplug the bed.  Pinky warned me against it, but I always say, “I’d rather beg forgiveness than ask permission.”  I didn't see anything else plugged into the bed… the IV drip was completely separate, and they weren't using the blood pressure cuff on me, so it appeared to me the only thing I was risking was a scolding… once I got a few hours of sleep, I hoped.

They also wanted me to start filtering and capturing my pee.  I've always been a bashful pee-er, so because I didn't want anyone walking in and startling me (which would probably make me twitch and start peeing on the fancy medical equipment), so I had to take precautions.  I had to unplug my drip machine, trundle everything into the bathroom, get my sweatpants lowered, get my hospital gown raised, and then manage to produce some pee AND hit the target.  That’s a lot of coordination for a guy that’s been on drugs all night.

I was concerned about the rest of the passage, but the doctor said the urethra the stone needed to go through is larger than the ureter it passed through earlier.  The “tubing” would adapt.  I was just worried about the “end game.”  I looked at “Bluz Jr,” and wondered what would happen if the stone got stuck at the end.  Seemed to me I would turn into some kind of lawn sprinkler, like when you cover the end of a garden hose with your finger.  I probably should have asked for a bigger pee jug.

I never know what to do with the pee jug, either, after I've used it.  Do I display it on the bedside table, like the golden idol that Indiana Jones goes after at the beginning of Raiders of the Lost Arc?  Or do I leave it stashed in the bathroom, where it’s liable to get knocked over?  What’s the etiquette there, Cassie?

Anyway, my pee must have been golden, because around 4:00 pm, someone came in and told me they decided to discharge me and I could go home immediately.  This was a mixed blessing.  I’d finally get some sleep, but I’d lose my access to the Dilaudid.  They gave me a prescription for Percocet instead, so I felt a little better about it.  I've heard good things.

I asked what they wanted me to do, like, can I just get up and walk out?  They said unless I felt I needed a wheelchair, yes.  I was like, “Hot damn, I’m outta here.”

But I don’t think they communicate amongst themselves very well.  When I got dressed and went out, the nurses outside seemed shocked to see me up and intending to leave.  They had to call and verify that I was allowed to mosey.  I was all, “Hah!  In your face!  You don’t get ANY more of my pee!”

I went home Thursday evening and began pounding water, hoping to get this thing done.  It didn't happen though, and by Monday, I was back in the hospital… but not for the reason you’d think.

To be continued… again.