I really didn't want to do another political post so soon but there’s so much going on out there that it’s making my head explode.
The first thing I want to address is this flawed notion that the country’s economic problems belong to Obama now.  I agree that they belong to him to fix.  However the Right is postulating that since he’s been president a year and a half now, that he take the blame for current economic state.
Now I realize that the Republicans recognize that it’s election season and are desperately trying to run away from their role in our dire economic straits, but just because they want us to forget about it doesn’t mean that we have to, or that we should.  I mean, does the passage of time really change the cause(s) of events in the past?
Let me put it like this:
Little Georgie took his hatchet and with the help of his little friends, started whacking on a big, robust cherry tree in the park.  Eventually, the townspeople saw what was going on, wrestled the hatchet away from Georgie and sent him and his little friends packing.
Just then, a professor from the Midwest happened by and was drawn into the scene.  The townspeople implored the professor to see what he could do to repair the damaged tree.  So he set out to consult with the area’s best arborists to repair the tree and stimulate some healing growth.  They worked long days and nights, but in the end, for every new branch that grew, another one fell off.
After a year or so, the townspeople grew tired of seeing the work zone that had been put up around the tree, and resented that they no longer had any more fresh cherries.  Some of the townspeople, including a shadowy bunch that had given Georgie the hatchet in the first place, began blocking the professors path to the tree and throwing rocks whenever he appeared.
Now I ask you, who is at fault for the state of the tree?  Is it the guy that’s working hard to fix it?  Or is it the little bastards that hacked it up in the first place?
We may get impatient for a fix, but that doesn’t change history.  What it does is say more about our miniscule attention span than anything else.  There is one group bent on fixing the situation.  The other group doesn’t like that and is clamoring to be given the ax again.
Why on earth would we hand the ax back to Little Georgie and his hooligan friends? 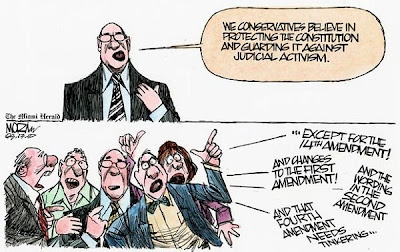 Maybe They Should Have Bought More Coats
I’ve also had enough of the whole “Ground Zero Mosque” controversy, about a place that’s not a mosque getting built on a location that’s not Ground Zero.  I hate it when verbal shorthand becomes the basis of gross misinformation.
Yeah, the titty bars and liquor stores that are closer than the Burlington Coat Factory-cum-Muslim activity center, (the MMCA, if you will), are so much more respectful.  It seems to me that moderate Muslims are exactly who we need to be cozying up to, if we really want to drive out terrorism.  By making them jump through hoops, all we’re doing is driving more of them straight into the terrorist training camps, where they’ll be forced to do the hand-over-hand bars on YouTube, before strapping bombs to their chests and taking a trip to the mall.
How far does the hallowedness extend from Ground Zero?  Five blocks?  Ten Blocks?  Does hallowedness diffuse, the further it gets from Ground Zero?  Maybe they should just put a big dotted line around lower Manhattan.  Make Time Square the DMZ… the DeMuslimized Zone.  Then cram all the Muslims into the Upper West side, to scare all the liberals.
It amuses me how everyone says, “It’s not that they’re building a mosque, it’s where they’re building it.”  Except that it isn’t.  Just this week, Jon Stewart showed footage of anti-mosque demonstrations going on in cities all over the country, in a half dozen places where a mosque is planned.  Is it all hallowed ground?
Actually, I guess it is… it’s the American Way… “My backyard is always hallowed ground.”
I just have one more thing to say about this issue that was tailor-made to be an election wedge issue:
“Congress shall make no law respecting an establishment of religion, or prohibiting the free exercise thereof;”  ~Excerpt from The 1st Amendment of the US Constitution~
That goes for all religions, even the ones we don’t understand.  End of fuckin’ story.
Posted by bluzdude at 7:05 PM