The Belle of the Firehouse

OK, let’s lighten the mood, after that last political spleen venting and get back to telling stories.  Dad, I know you’ve been waiting for this one… why, I don’t know, because you know the flippin’ story in the first place.
I try not to spend too much time dwelling on my marriage, now 13 years in the past, back in Albany NY.  There’s no real up side to carrying around a lot of anger and upset.  When I have to think about that period of my life, I try to remember the good parts.  And this story was definitely a good part… for me, anyway, because it’s been one of my story-telling staples ever since.
I was at work one Sunday in February (retail job) and got a call from Future Ex.
“Well,” she said, in her New York honk that sounded exactly like Carmella Soprano, “I almost died today.”
I was like, “Holy crap, what happened?”
Here’s what happened.  We had a small, unfinished laundry room area just off the downstairs family room.  The washer and dryer were up against the wall.  There was no drywall… just the unfinished studs.  That left a gap between the appliances and the actual wall.
That afternoon, she dropped our rechargeable screwdriver down behind the dryer.  She was fairly tall and slender, so she figured she might be able to reach behind and fish it out.  So she climbed up on the dryer and began reeeeeeeaching down behind it, blindly grasping for the screwdriver.  She reached further and further until all of a sudden, her weight shifted and took her past the balance point pitching her headfirst into the space behind the dryer; the wall studs on either side of her.
She was trapped with one arm forward and one arm back, so she had absolutely no leverage to push or pull herself out.  She was stuck there, with only her long legs waving back and forth from behind the dryer, like stalks of wheat waving in the Kansas breeze.
So I had to ask her the main question that had been racing through my mind, “Oh my God, what were you wearing?”
She said she was wearing a long t-shirt and sweat pants, which was a huge relief.  See, that’s about 2 articles of clothing more than she usually wore around the house on the weekend.  Her normal attire was a long t-shirt (maybe) and a scowl; nothing else.
“Thank God”, I said, “so what did you do?”
She said she yelled for her 9-year old son from the other room and asked him to call her father, who lived 10 minutes away.  He said he’d be right there.  But she began to panic.  She was getting light headed and began to actually fear for her life.  She said she thought she could die from being in this position.
I was like, “Are you kidding?  You can’t die from that!  Have you ever seen a headline before that said, ‘WOMAN DIES FROM BEING UPSIDE DOWN TOO LONG’?  The last person that happened to was St. Peter, for cryin’ out loud.”
OK, I didn’t really say that out loud.  On the phone I said, “Oh, dear, that must have been so scary.  Then what happened?”
She didn’t think her daddy would get there soon enough so she then directed the boy to call 911.
That’s when I lost containment and busted out laughing.  She explained how the fire truck came screaming up, a half-dozen of local firemen came tromping down the stairs, saw her stork legs waving from behind the dryer, and yanked her out of her domestic bear-trap.
All I could think was “Thank Christ she had some pants on.”
The firemen rescue her, chuckling the whole time, she’s wobbling around trying to apologize AND not fall on her face from all the blood rushing away from her head, all the while fretting about how they’re tracking mud on the carpet.
I’m sure they talked about that one down at the firehouse for YEARS to come. 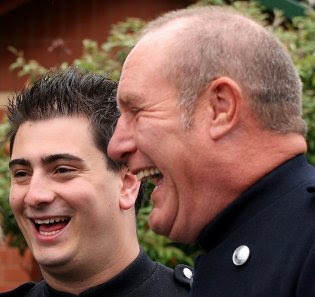 Photo by dragonman
She seemed to be pissed at ME for not being there.  I told her it was much better that I wasn’t there, because I guarantee I would have pulled out the video camera first and shot a couple minutes of tape.  Probably would have won 10 Gs on America’s Funniest Videos too.  Damn… maybe I should have been there.
When I told my dad this story, I thought he was going to shit himself laughing.  And in fact, later that month, at a company meeting where everyone was supposed to introduce and tell a funny story about themselves, Dad said, “I don’t have a funny story about me, but let me tell you what happened to my daughter-in-law.”  He killed the room with that story.
Since I still have some room here, let me tell you the follow-up story to this, because I always tell them as a pair.
We had a house that had a ground-level deck behind it.  There was a little 6-foot hill directly behind the deck, which led to a heavily wooded back lot.  It was like our own little “woods,” with a clearing for horseshoes and a tree swing.
One nice Spring Sunday morning while I was talking on the phone with my parents, she decided she wanted to go all Earth Mother and prance around our backyard wood, naked as a jaybird.  I’m looking out there and she’s flitting around, looking at flowers, examining strange tree-fungus and stuff.
I continued with my phone conversation for a few minutes more, but the next time I looked out, I didn’t see her.  At first.
Then I saw her peeking out from around a big tree, her eyes as big as saucers.  She began frantically pointing to her right.  The neighbors were pulling up their driveway, coming back from church.  Our yard had a lot of privacy, but not so much that they wouldn’t see the blinding whiteness of the Earth Mother out there in all her glory.
She gestured wildly toward the downstairs and I picked up her meaning.  I ran downstairs and threw open the sliding glass doors.  She came bolting out of the woods, down the hill and straight through the doors into the house, like a pasty Olympic sprinter.  ZOOOOOOOOOM!!
I almost pissed myself laughing, and Dad had another story for the next meeting.
Unrelated Housekeeping Note
You may have noticed the visual changes around here… I updated the basic template I’ve been using since I started the site.  It really used to bug me about all the empty, wasted space that was on the far left and right of the screen.  I HATE wasted space.  If you ever saw the walls of my apartment, you’d understand.
But I didn’t like how the main writing space was all squeezed up.  It made my already longish posts seem that much longer.  Anyway, I hope you like the changes.  I’m still just as long winded, but at least you won’t wear out your mouse finger getting through it all.
Posted by bluzdude at 8:27 PM