Once I got into a football vibe with the last post, I started thinking about the upcoming Steelers season.  Aside from the actual game playing part of it, I started thinking about the legend that was Myron Cope (1929-2008).
If you’re from Pittsburgh, you know all about him, and you and everyone you know has probably imitated him at one time or another.  This will be a trip down memory lane. 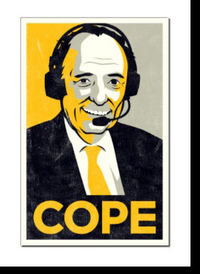 If you’re not from Pittsburgh, let me tell you about this guy.
Myron was a tiny little guy, a well-accredited sports writer for newspapers and for Sports Illustrated.  Almost on accident, the Steelers put him on the air, broadcasting Steelers games.  It was quite a risk… Myron has a voice like no other.  He sounds like a pissed off hardware store owner.  He is not polished or smooth and is prone to sputtering when he gets overly excited.  But to Pittsburghers, he’s one of us… our surrogate up in the booth that tells us what’s going on.
Besides broadcasting the games, he also did his own sports call-in show as well as sports commentary on TV.  Granted, his face was suited for TV about as well as his voice was suited for radio, but his sparkling wit, intellect made him a Pittsburgh household name, as well as his complete fearlessness of making a fool out of himself.
I could go on describing some of his regular bits, but they’re already all over the web, and quite Googleable.  I should also mention that he’s the guy that invented the Terrible Towel.  That story is Googleable as well, but let me point out that long before he passed away, he signed over all royalty rights for The Terrible Towel over to a school/home for autistic children.  Think about the cash involved there.  Ever see how many Terrible Towels are out there?  Consider that they are NOT given away at the stadium, like every other copycat team in the league does.  Every fan twirling a towel bought it for about $7.00. 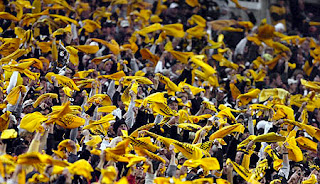 This is going to sound funny, but I’ve hardly ever listened to him.  I didn’t live in Pittsburgh while he was broadcasting, so the only opportunity to hear him was the rare occasion when we were visiting.  And in those cases, we usually had the game on TV.  (Yes, I know that many people turned the TV down and listened to Myron on the radio, but we didn’t.)
Once I started going to some games in Pittsburgh, we always listened to his locker room show on the way home.  That was often as much fun as the game itself.  But I never really got to hear his radio calls until the early 2000s and I was living in Baltimore.
The Steelers would be playing but they wouldn’t be on TV.  I was too broke to go out to a sports bar, so I’d listen to the radio call over my new-fangled PC.  That’s when I finally got to hear Myron in his element.  Hearing him get all worked up on the radio was just delicious and just the tonic a lonely Steelers fan needed.
I’ll never forget listening to one preseason game against the Redskins, who were in a state of disarray after a bumpy off-season.  Myron kept referring to them as the “Redfaces.”
New owner Daniel Snyder sent one of his lackeys into the booth, to tell Myron to stop calling them the “Redfaces.”  Myron went ballistic, on the air.
“If that Boy-Owner thinks he can tell me what to do, he can go stick his head in a bucket of paint!”
I almost pissed myself laughing. 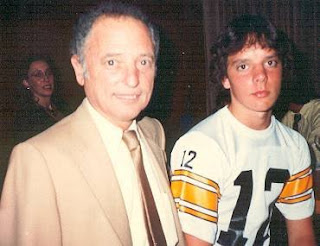 My brother with Myron, circa 1981.
Anyway, I could write about Myron forever and not come close to having you know what he was like to listen to, so I won’t try.
Instead, I spend the last two nights putting this “video” clip together for you.  There have been Myron Cope sound bytes available on the web for years.  I downloaded a ton of them from one site in particular, probably the first month I had a PC.  I would credit and link the site here, but alas, it seems to have been taken down.
Lucky for me, I still have all the clips, so I picked out my favorites, tried to group them into some kind of logical order, added some signposts and assembled them into one YouTube video, which you will find below.
Now trust me… sports fan or not… you gotta give a listen.  At first, you think it’s a miracle this guy lasted 10 minutes on the radio, as opposed to 30 years.  But soon, you come to see the humble, homey, homely brilliance.
Plus, if you’re going to be painting a room soon, this will loosen the old coat for you.
If you want to indulge me in comments, tell me which clip you liked best.
Cope… you’re on, buddy…
Note: The "COPE" picture at the top is available on T-shirts and more from CafePress.
Posted by bluzdude at 9:06 PM

Email ThisBlogThis!Share to TwitterShare to FacebookShare to Pinterest
Labels: Best of Darwinfish, Pittsburgh Steelers, The Burgh

I haven't read this blog yet.. my daughter & justin beiber are trying to take over my computer... BUT... I know who myron cope is and very neat your bro got to meet Mr. Towel.

Myron was never too hard to find... just stake out the hotel bar where the Steelers were staying.

But hang reading the blog... play the clip!

My husband used a Terrible Towel to block the light on his old front door when he lived in Bloomfield.

If it weren't for Myron, he would have been prematurely awakened. Thanks, Mr. Cope.

Oh, and my biological father's first name is Myron. I grew up thinking it was Lee. Yah, that's his middle name. Myron Lee. Ha ha. Myron.

Cope was an original. "Some of these guys haven't been bar mitzvah'd yet", and "Tom Coughlin will now proceed to throw fit number 37 of the night" made me laugh out loud. I always loved how Bill and Tunch would laugh AT him during broadcasts and he just kept going.

I adored Myron Cope. Few people realize that he was also considered an esteemed writer. That seems odd, I know, given the way he sounded, but he was a terrific writer. His generosity will live on as his legacy and those of us who heard him will never forget the color he brought to sports.

OMG! What a guy! I didn't know whether to laugh or cry! One thing's for sure--you didn't want to be on the other side of that mike when he was spitting into it!

I have a letter I received from Myron Cope from 1972 on WTAE stationery.

I wrote to him inquiring how I could become a member of Franco's Italian Army. Cope most happily obliged me with a reply and the answer. It is dated prior to Franco's Immaculate Reception!

Myron was perfectly paired for many years in the booth with the great Jack Fleming. Fleming was one of the best play-by-play radio announcers for football ever. Did West Virginia broadcasts on Saturday and Steelers on Sunday. Those two had a great chemistry rarely heard today.

Cassie,
That’s the beauty of the Towel… it’s actually useful. It wipes seats, dries you off, can keep you warm… I’ve used it as a headdress to block the sun, and now, it’s a sleep facilitator.

I don’t see how our Myron could be named anything else. Plus, when Pittsburghers say it, it’s more like “Mahrn”

DG,
Original, to say the least! Remember, in previous posts I mentioned that this is the guy I wish they could use to make a Pittsburgh-dialect GPS voice.

I love the “Najinski” stuff… Bill and Tunch Ilikin used to rag him on that every time:

“Now why wouldn’t you use ‘Barishnikov’?

“Don’t quibble with me, Ilkin!”

Love the Bar Mitzvah line too…

My biggest favorite is probably the Reggie Tongue line: “The safety-man Reggie Tongue came up to try to stop The Bus, The Bus stuck his tongue out at Tongue and said, ‘You can’t stop me, you’re just a safety-man’…”

Cher,
Absolutely true, about his writing and it fits given his physical “uniqueness.” I mean, in this age of mannequin TV people with polished commentary and patter, what would be the odds of someone like him ever being hired now?

Mahrn was one of a kind. Just hearing his voice makes me smile, despite myself. In fact, for years, I’ve had those sound bytes loaded on my MP3 player, so they come shuffling up every so often between songs. I’ll be sitting on the subway, a song will finish, then I’ll hear him yelling, “Carlos Emmons hit him so hard I swear I saw his mouthpiece fly into the 5th row, an old lady caught it on the fly, checked it for a fit and put it in her pocketbook.” Can’t help but laugh…

Judie,
Yeah, he’d just get so excited, he couldn’t get the words our fast enough. They probably had to change his mic cover after every game.

Dog,
It’s great how we used to get real live responses when we wrote in to celebrities. My brother used to do that when he was a kid… I think he might have gotten Myron too, but I know he got a postcard back from The Chief.

I never got to hear Myron with Jack Fleming. Bummer…

I know next to nothing about football, but my favorite priest is a HUUUUUGE Steelers fan. In fact, he told me once that if he ever gets a tattoo, it will be a Steelers helmet on his bicep.

You don't have to know anything about to appreciate Myron. Honestly, click the video.

If your priest isn't from Pittsburgh, he's may be a fan because the Rooneys (who own the Steelers) are a VERY Catholic family, right down to their holy cards.

Bluz, if you ever heard the audio from the radio broadcast of the Immaculate Reception, that's Jack Fleming. NFL Films uses it all the time. I'm almost certain Myron was his broadcast partner that day.

I missed out on Myron, having moved to Pittsburgh in fall of 2005. He sounds like a character on the Simpsons or something. I love the bit where he can't get the other team's city straight.

I grew up with one-of-a-kind voices in Chicago. You may have, too. First, there was Jack Brickhouse doing Cubs and Bears games. Then there was the immortal Harry Carey, who did the White Sox before moving to the Cubs. In his prime, he'd get blitzed on beer as the game went along and you never knew what would come out of his mouth.

All the Chicago broadcasters are so vanilla now. Except maybe for Hawk Harrelson of the White Sox.

I remember Jack Brickhouse. As little kids, my brother and I used to imitate his "Hey Hey!" home run calls.

I never heard much of the real Harry Carey... the Bob and Tom version, however... priceless!

Askcherlock is so right about Myron, the writer. His prose was/is more poetic than many poems. He is the real deal.

Mary Ann,
This applies to Myron, and I always say it in reference to myself…

“It’s a lot easier to edit when writing than it is when speaking…” Myron was living proof.

Anon,
Agreed! Gone are the days of the lovable, local, home-dialect-using announcer. Smooth and generic is all you hear now...