Tykes on a Plane

With all the news about America’s Newest Hero, the guy that finally had enough abuse from airline passengers that upon landing, he commandeered the plane’s PA, told everyone to fuck off, grabbed two beers and pulled the escape chute and dashed off onto the tarmac to make his escape.
His story, though not directly related, reminded me of a post I did about the bane of my aviating existence: little kids.
I wrote a thing about it on my old site a couple of years ago and have been tempted to revive it here a number of times.  The last time I was thinking about it, Ginny from That’s Church went and did a post about how tough it was for her to fly with her young kids, and how much she appreciated the kindness and sympathy of strangers to help her through the ordeal.
So I thought I’d better sit on it a bit longer.  I mean, I’m generally sympathetic to the parent’s plight in trying to travel with kids.  I know all Mom wants is a quiet flight too.
But Jesus, I didn’t pay $300 so I could listen to screaming for 2 hours, or get my seatback kicked every 7 seconds, or have some little monkey staring and babbling at me, smearing jelly and crumbs all over my pants, or God forbid, have to get a diaper change from 3’ away while captive in a stuffy plane cabin.  Chances are; I’m either hung over, or about to be.  I need rest.
So I wrote this post right after flying back from somewhere or another and getting my last nerve ground right down to a pulp.
*****
I’m just back from a short vacation, and I’m working on a new Law of Nature:  “The perceived cuteness of a child is proportionate to emotional connection.”  I call it, “Urchin’s Law.”  Consider the chart below:
This whole thing occurred to me on my plane-ride home on Southwest Airlines.  I was checked in early, with the coveted “A” boarding pass, which allows you to board among the first third of the passengers.  This is important to me, as I strongly desire an aisle seat, which allows me to stretch my legs and trip any prospective terrorists running down the aisle, before pelting him with stale nuts
So I’m in my aisle seat, with some other slob on the window, with the middle open.  Now the stewardess wants to know who will move up so that a woman with her 2 kids can sit together.  At least that’s what I figured out she said later.  I had my headphones on so all I heard was “Whonk whonk whonk,” like it was Charlie Brown’s teacher.
The Window Slob jumps at it, and next thing you know, here comes the lady with her entourage… a little blonde baby boy, a little blonde boy toddler, and a safety seat the size of a Barca-Lounger.  I stand in the aisle for about 20 minutes while a team of experts straps the Barca-Lounger into the window seat.  Mom and the baby, who looks like a quality control reject from the Cabbage Patch Company, sit in the middle.  Finally I can ease back into my aisle seats, and am free to resume defense against running terrorists.
Having determined that the plane is terrorist-free, I pull my hat down over my eyes, turn up the MP3 player, and commence napping.  And for most of the flight, it was fine, save for a lot of bumping and squirming, but I try to remain tolerant… I know it’s a tough gig schlepping a couple of rug rats across the country. 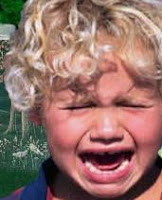 About a half hour from home, the screaming starts and thus begins the Descent Into Hell.  The little one starts and stops, but mostly just screams… the older one keeps up a low moan, punctuated with an occasional shriek.  Each shriek pushes the younger one up an octave.  Here I am, strapped into this speeding metal tube, thirty thousand feet in the air, along side a couple of Howler Monkeys.  Pretty soon I’m tempted to stand up, claim control of the plane in the name of Allah, and maybe bait an Air Marshall into throwing a couple of shots between the eyes… me, the mother, the baby… whomever.  Just make it stop!
To complete the job of screwing me, the stewardess picks this as the time to ask us to turn off all electronic devices. I took this to be their personal payback for me not listening to their important safety lecture about how to undo a seat belt.  The headphones were the only buffer I had, so now I’m getting the full force effect… a couple of dentist drills in Dolby 5.1 Surround-Sound.  Maybe if I offer to hold one of them, she’ll be too busy with Toddler-Demon that she won’t notice me stuffing Baby-Demon into an overhead bin.  Hey, I’d use the one holding all the pillows… I’m not totally insensitive.  But before I could act, I felt the thump of the wheels touching down, and by the time the reverse-thrusters stopped, the screaming was over.  Maybe this is a new way of ensuring that all flights hit their ETA.
Now before everyone starts explaining how babies cry because of the change of altitude during descent, let me just say this:  Bullshit!  There was a baby about 10 rows up, and didn’t hear a peep from him.  I’ve also flown with my nephew when he was a baby, and he was practically perfect.  (See chart above.)  That’s why I feel safe in my conclusion that these children were evil, and sent to torment me.  But I’ll get even though… they’ll be sorry when they’re paying for my retirement and early-bird dinners with record FICA deductions.
Mwaa ha ha haaaa… Revenge is mine…
Posted by bluzdude at 10:27 PM