Birth of a Bluz Dude

Growing up, I had only a passing acquaintance with the blues.  Mom used to play “BB King – Live at the Cook County Jail” from time to time, and I liked that because there was that funny line in “How Blue Can You Get?”

“I bought you a $10 dinner
You said ‘thanks for the snack.’
I gave you seven children,
And now you wanna give’em back”.
I liked the Blues Brothers when they came out, even though they were kind of jokey, although there was no joke about their backing band.
But I’ll never forget the day the blues jumped up and bit me.
It was 1983 and I was a senior in college.  I was puttering around up in my bedroom, with the radio tuned to the local FM rock station.  Suddenly I heard this huge noise, a great opening guitar flourish followed by a muscular, walking bass line.
I snapped my head around toward the radio and thought, “What the hell is that?”  It was unlike anything else that station ever played.  I loved it by the end of the first minute.
“Have you heard about a love,
Give sight to the blind.
My baby’s love cause the sun to shine.
She’s my sweet little thang…
She’s my pride and joy.
She’s my sweet little baby,
I’m her little lover boy.”
That was my introduction to Stevie Ray Vaughan and his first hit, Pride and Joy.  I hadn’t heard a guitar played like that… no power chords, but definitely a powerful guitar.
The next time I had to work at the record store, I found the new Stevie Ray cassette and bought it.  After quitting time, I slapped it in the car stereo and headed for home.
Holy crap, he played like a man possessed.  I was especially floored by the instrumentals, particularly “Rude Mood”.  It was so fast and so clear and so unlike anything else I’d ever heard.  My musical world had just been turned on its ear.
When I got home, my mom and dad were sitting out on the swing in the back yard.  I ran back and said, “You have GOT to hear this!”
I ran into The Barn, grabbed the stereo speakers off the wall and propped them up in the windows.  Then I put the tape on and the yard filled with the sound of the blues.
The parents were suitably impressed and also became fans.
From there, I began to do a lot of rummaging through the blues section at the record store.  Another guy that worked there knew something about blues guitar and began showing me some other guys…
“If you like Stevie Ray, try…” Johnny Winter, Albert Collins, Roy Buchanan became new favorites.  But to me, SRV was always king.  I bought every album he released for the next couple years.
I remember working in the store one day and the manager was putting on a new record.  Within about 10 seconds, I knew it was the new Stevie Ray.  The cut was “Scuttle Buttin’” a fast and furious shuffle that opened his 2nd album, “Couldn’t Stand the Weather”, with a bang.
In October of 1986, Stevie Ray came to town to play a show on my birthday.  He was touring on his 3rd album, Soul to Soul.  This was his first album and tour that included a piano player.
Up until that night, I’d never seen him play.  I’d only ever seen one music video, the one for “Cold Shot”, which was great, (and very funny) but didn’t really highlight his playing.  Once I saw, I was dumbfounded.  What a show… what a showman.  I was just slayed. 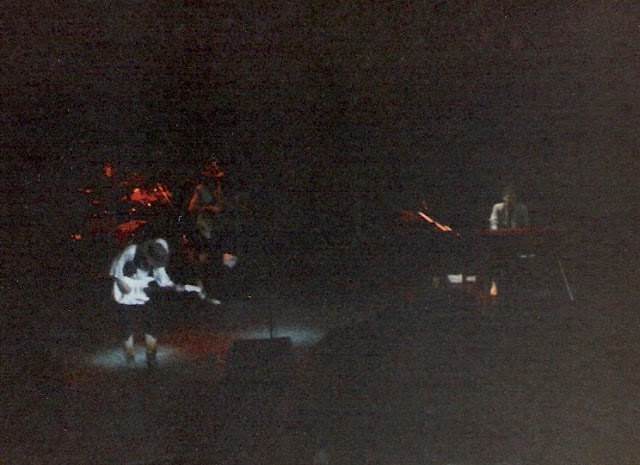 Taken from the 2nd row of the 2nd tier.  We were actually much closer than the picture indicates.
He opened up with “Scuttle Buttin’”, which he melded right into the wah-wah pedal instrumental, “Say What”.  He played his ass off all night, often times playing behind his head or behind his back.  It was unbelievable.  And his new keyboard guy was just stellar.  His organ solo during “Say What” and piano solo during “Couldn’t Stand the Weather” were spot on.
Soon after, he did a concert on MTV, playing on a New Orleans riverboat.  I recorded it off the TV and I swear I wore that tape out, just trying to watch his hands.
Stevie Ray Vaughan changed everything for me.  The blues became my primary music.  Once I began to manage stores, I would make it my priority to set up a respectable blues section, especially in the big freestanding store I managed on the east side of Cleveland.  I tell you, I rocked that place with the blues on Friday night, often to the chagrin of my staff, who just wanted to hear Guns & Roses or Bobby Brown or Ice-T.
Then one August day in 1990, just after I had moved to Albany NY to run one of our company’s best mall stores, I got a phone call with some disturbing news.
There was a helicopter crash in the hills of Wisconsin.  Stevie Ray Vaughan was among the dead.  That was August 27, 1990, 20 years ago yesterday.  And today is 20 years since I got that phone call.
I was crestfallen.  I don’t think I’d felt like that about the death of someone outside my circle since 1972 when my childhood idol, Pirates outfielder Roberto Clemente, was killed.  The only upside is that when I first got that call, I was told that Eric Clapton was killed too, which turned out to be untrue.
Thankfully, Stevie Ray’s music lives on.  You can trawl though You Tube videos and find a treasure trove full of material.  His influence has been felt throughout the music industry, although if you listen to the radio now, it might be hard to spot.  But back in the 80s, white boys all across the country picked up guitars and started playing the blues.
I may not have been able to actually play, but someone has to be in the audience.  That would be me.
Rest in peace, Stevie Ray.  You’ll never be forgotten.  You’ll always be the guy that turned this regular dude, into a bluzdude.
By all means, play this video... Stevie Ray at his finest!
Posted by bluzdude at 6:32 PM