I promised Woman: Confused that I’d do a sports post and I’m nothing if not a man of my word.  I’ve been pretty much leaving sports alone since the Stanley Cup playoffs, but now the 2010 football season beckons and it’s beginning to draw my attention.  And not even in a good way.
The Ratbirds had their first pre-season game last night.  It was against the Carolina Panthers and broadcast nationally on ESPN.  For some reason though, they also saw fit to broadcast it on the local CBS affiliate here, and in the process, pre-empting Big Brother.  Pissed me right the hell off.  I mean, it’s the same exact broadcast; why does it need to be on two channels?
Yes, yes, I know… for all the people that don’t have cable.  What’s that, about a dozen in the Baltimore metro area?  I want Big Brother damn it!  It was eviction night.
Oh well, I’ll catch it on On Demand.  Crisis solved.  My downward spiral into Lowest Common Denominator Television continues.
OK, we were talking about sports…
I don’t know what it is about me that revels in counter-cultural activities.  (As you may remember from last season, I despise the Ravens, and spelled out my issues with this band of idiots in a post from November.)  I work in a big building and since it’s located in downtown Baltimore, it’s populated with about 80% Ravens fans.  But there’s a small, secretive group of us Steeler fans that scurry along the baseboards and pop out at unexpected times.  We covertly acknowledge each other in the hallways, maybe trade tasty links once in a while.
This year, we decided to organize.  One of the executive admins and I decided to compare notes and come up with a list of all the Steeler fans we knew in the building and see if they might be interested in getting together for lunch every so often, to talk a little Pittsburgh football.  The response was unanimous… everyone wanted in.  It’s especially good that we have one of the Executive Vice Presidents in the group… that kind of pull gets us the boardroom for lunch!
If we’re going to have a secret club, I decided we needed to have a name and logo.  So this is what I came up with.  I still have to see if the group approves. 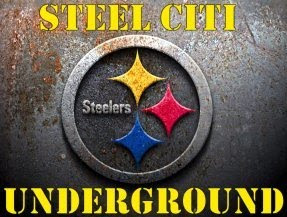 Anyway, we’re having our inaugural lunch before the opening game.  And I mean a real game, not freakin’ pre-season.  I really don’t follow pre-season at all.  Games are totally meaningless.  The scrubs take most of the snaps and the teams don’t game-plan for each other.  All I want to see is my team not take any injuries.  If the starters look sharp, that’s just gravy.
As you may have seen before, I’ve never been a bashful fan.  My cube is always tricked out with Steelers (and Penguins) decorations.  There is never a doubt where I stand. 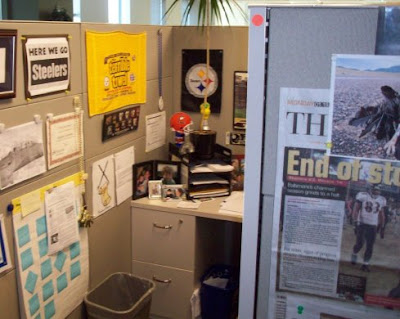 My current cube, shot a couple seasons ago.  There are 2 more Terrible Towels just to the right of the palm plant.
One thing I like to do is tack up negative Ratbirds headlines on the outside of my cube wall.  I just want to make sure the Rattie fans’ heads don’t get too big, you see.  But back in 2005, I took this to an art form, literally.
I was in my previous department and was surrounded by a lot of Ravens fans.  When the Ratbirds opened the season with a couple of losses, I decided to make a collage out of the press clippings.  I figured I’d do it for a few weeks and have a little fun with my purple-clad co-workers.  It started out like this: 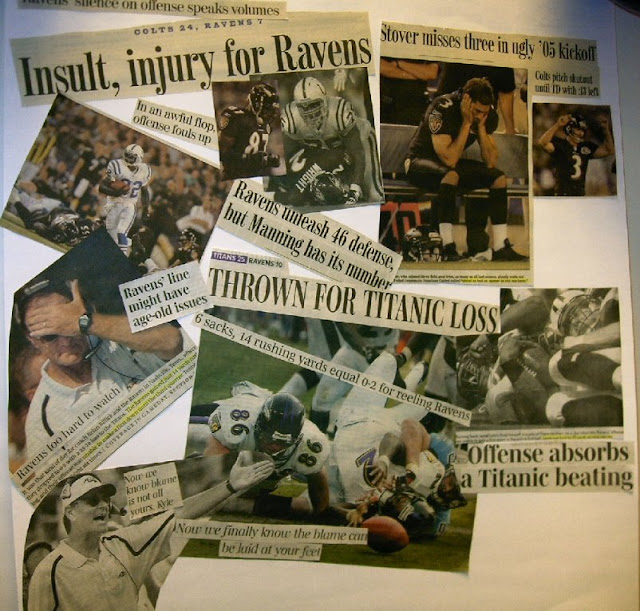 Click the pic for the larger, more detailed version.  Same with all the shots to come.
Well, the losing continued and the headlines and pictures were just priceless.  The thing was, this was the local paper… the cheerleaders!  The Detroit game was especially juicy because the Rats committed over 20 penalties and completely melted down.  So I kept the board going. 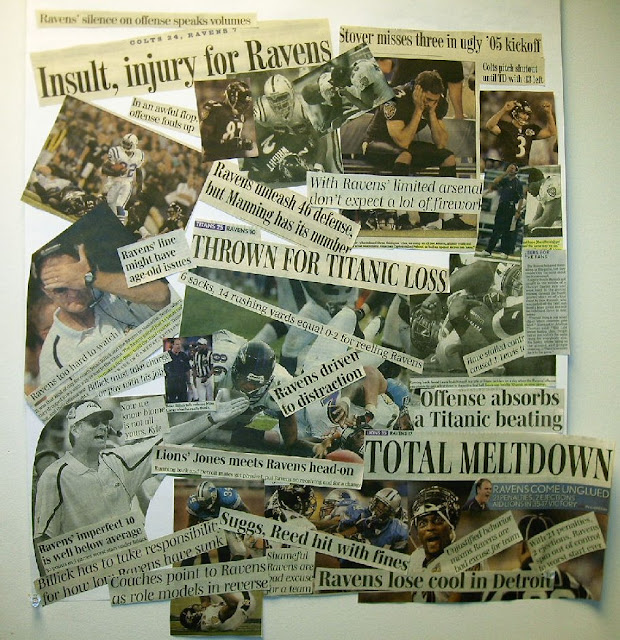 I had my growing collage hung on a big pillar, above the height of the cube walls.  You could see it from all over the floor.  I had one friend in particular that was especially rabid about the Rats, so just to twist the knife a little further, I affixed his name to it.  I told him it was an honor I was bestowing. 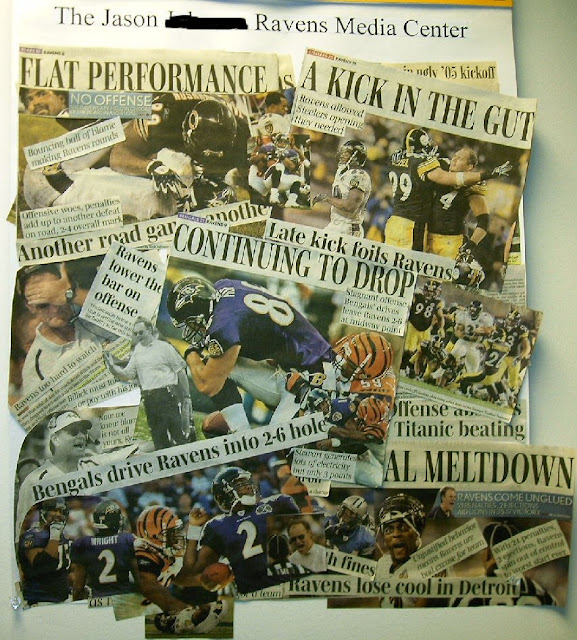 The losing kept up all season so I kept at it… the headlines, pictures of angry faces, fumbled footballs and celebrating opposition.  The biggest problem is that I had limited space.  I had to keep covering up older items to make room for the new.  By the end of the season in January, the thing was packed.  Now, I present my tribute to purple futility: 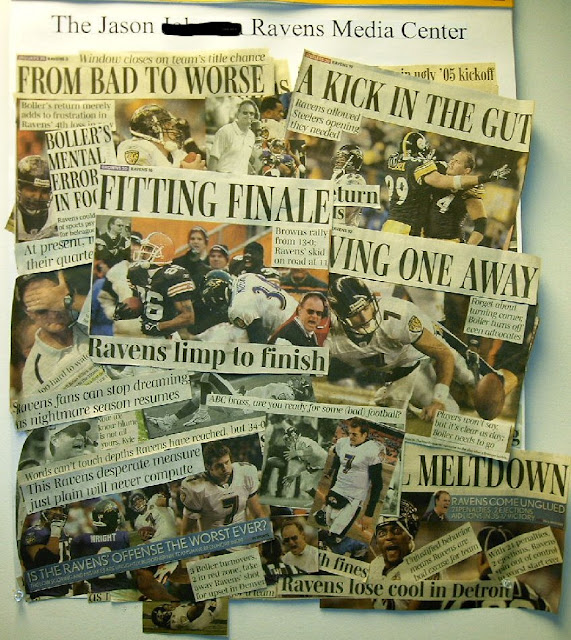 I don’t think Jason ever forgave me, especially when my Steelers went on to win the Super Bowl that season.  Or when they won it again in 2009.  But by that time, they barely came around me during football season any more.  I can’t imagine why…
Posted by bluzdude at 8:47 PM