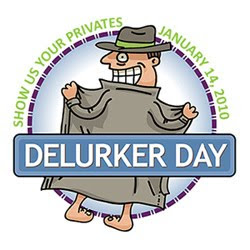 As I began checking out my favorite blogs this morning, I noticed that many were flying the picture you see above.  De-Lurking Day is meant to prod people that visit your blog into commenting, rather than just coming to read and moving on (in other words, lurking).

I think that’s a fine idea.  I just wish I could have gotten a post up sooner.  The place where I work blocks access to Blogger, so I cannot post or comment, even on my own blog.  For some reason though, Wordpress and various other blogs platforms are not so encumbered.  So for what it’s worth, here I am… late to the party again.  So for anyone that stops by today until the time I do my next post (probably Saturday), please drop me a comment to say hi and whatever else is on your mind.

As you know, comments are the “crack” of blogging life.

In even a cursory jaunt around the blogosphere today, you will see a recurring theme: 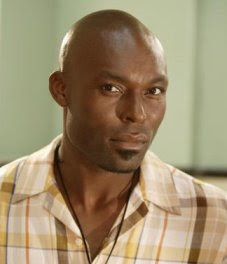 The devastation in Haiti has reached unbelievable proportions.  There is serious hurt going on right now and the tragedy is how little can be done about it in the short term.  Houses, hospitals, businesses… gone.  Roads are impassible.  The seaport is a wreck.

Always a groundbreaker, Ginny at That’s Church is spearheading efforts to reach a couple of Pittsburgh girls that run an orphanage there.  They, and all the children they care for are currently living in the yard of what used to be their building.  A number of the children are in process of being adopted, but not finalized.  That means they can’t even come here, should a ride miraculously appear.

Never one to take “no” for an answer, Ginny is rallying her readers to shake the political trees, hoping to summon people with planes and political ears at their disposal, to pave the way to get these kids a home at best and out of physical danger at worst.  These are kids with no one else in the world to turn to.  You can follow the story through a number of posts at That’s Church.  Read through some of the posts and their comments.  You will be awestruck at the warmth and heart of Ginny and all her readers.  They are living embodiment of Getting Shit Done.

The plight of the orphanage and Haiti in general is also being addressed at: Fries on Top, Red Pen Mama, Burgh Baby, Jayesel, Yeah Honestly, Love, Life and a Little Lion, Carpetbaggery and many other fine blogs.  A number of them are tying De-Lurking Day into a Haiti fundraising event and donating base on the number of comments received.  This is a good chance to go and not only find some very smart and cool bloggers, but do some good as well.

Never one to pass up a chance to make a pious, pompous ass of himself, Pat Robertson has been in the news after declaring that Haiti is being punished with this earthquake because they made a “deal with the devil” when fighting for their independence from France.

Cassie at Sisters from Different Misters has the TV clip and addressed this earlier today.  I added what I think about it, in her comments section.  And so did learned people, so click the link above to check out the conversation.

With so many fabulous people on the job covering serious events of this week, I decided not pile on.  I will be keeping to my usual routine of ranting, storytelling and merriment.  Please don’t take that to think I don’t care.  Someone has to keep up the level of irreverence, or else the terrorists win.  With that in mind, I present to you the funniest video I’ve seen today, that was sent to me by my dad.  And no, he’s not in it.

(PS.  Mom, Dad, just because I know you won’t get the reference, the picture of the guy in the plaid shirt is a character called, “The Haitian”, from the TV show Heroes.  I’m sure you’ve never seen him before, because he’s never been on Law and Order.)