The Miami Trip - The Sequel

The good news is that there were no hurricanes this time around.  The bad news… well, there really isn’t any.  We got down and back easily, the hotel was lovely, the game was enjoyable and the company was grand.  We ate, we drank, and we ate and drank some more.  We saw the Steelers win a dramatic game, but get bounced from the playoffs anyway.  So here are some of the things that happened:

*  No airport snafus… we got down to Lauderdale without issue.  There was practically no line at airport security.  I might have thought more people would have been traveling on Saturday morning, but I’d waited in longer lines at Burger King.

*  We stayed at the Hilton in Ft. Lauderdale, by the marina.  The hotel was beautiful, for the most part, but very crowded.  Apparently some cruise ships had just disembarked there so the lobby was overrun with a ton of foreign people (mostly European) with piles of baggage.  Also, there were a lot of University of Iowa students there for the Orange Bowl against George Tech.  Obviously, there were a great deal of Steeler fans as well and not only that, the actual Steelers were staying there too.  Just like old times, when we used to go to the games in Cleveland.  This was a surprise… we had no idea the players were staying there when we booked the rooms.

*  My sister Ann and her husband Scottie had a room in the main tower, so their room served as family HQ.  They were on the 9th floor with a balcony overlooking the pool. 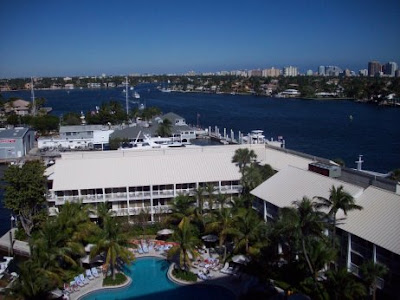 My folks were in an “East Villa” room, which you can see directly behind the pool.  My brother and I were on the opposite far end of the West Villa.  This was our West Villa view: 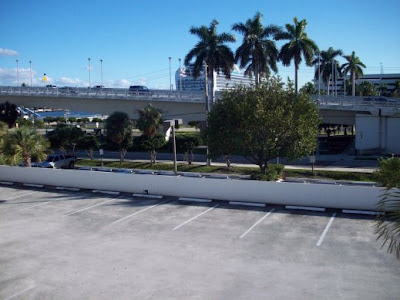 OK, it wasn’t exactly The Tower.

*  We couldn’t check in until 4, so we stashed our stuff in the Tower room and went down to the pool to sit in the sun, have some drinks and yack.  The “sitting in the sun” part was crucial.  It was really pretty chilly, for South Florida, and very breezy.  If you weren’t in the sun, you were shivering.

One thing I wasn’t crazy about was that the hotel flooded the pool area with music… if you can call it that.  It was this endless loop of this heartless, soulless electronica beat.  It was like you were trapped in an episode of Queer Eye for the Straight Guy.  Gah!  My kingdom for some real music!  Music should relax or inspire!  The only thing this stuff did was attract fat guys in Speedos.

*  After we checked in and got settled, we mustered out again for dinner.  And who’s patrolling the valet area but Jeff Reed.  He seemed to be collecting sluts for the night’s endeavors, before hopping onto the courtesy van.  We also saw Hines bolt straight from a side door to the van.  His hammies looked OK to me… he wasn’t wasting any time dallying around.  Throughout the night we’d come across other enormous dudes coming and going.  Dad wondered why they were wearing their shoulder pads under their shirts.  Of course, they weren’t.  They never grew guys that size in Coraopolis.

*  I think South Florida is kind of like the Los Angeles of the South.  Everything is very glossy, but shallow.  There are lots of shiny surfaces and bold lines but no heart.  For example, this is what they consider an outdoor fire, around which people are supposed to gather and hang out. 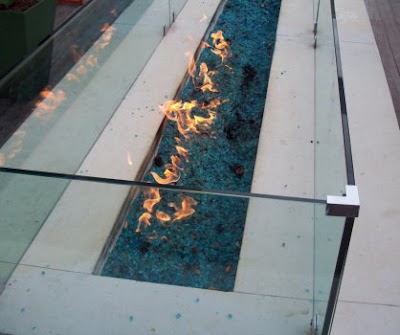 This looks like the coldest fire you’ll ever see.  Hell, you can’t even see what’s burning!  It appears to be nothing but a gas fireplace starter, blowing flame jets through glass gravel crystals like you’d find in an aquarium.  It’s not exactly inviting… unlike this: 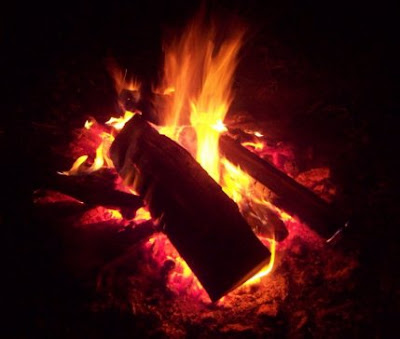 *  We caught zero guff from anyone about being there for the game.  In fact, we were treated like more of an oddity.  (Especially from the visiting Europeans)  I was expecting a little more attitude from local people, but as it turns out, no one is local.  Everyone there seemed to be from somewhere else.  (Yes, I know it’s a hotel, but I mean everywhere… restaurants, gas stations, carry-outs, etc.)

*  We had a fine dinner at an Italian place that was in walking distance.  I only mention this because we had an interesting discussion about olive oil. 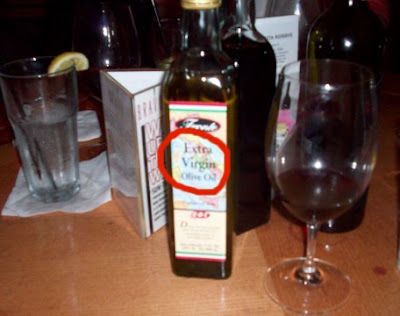 The discussion had to do with exactly what the hell “Extra Virgin” olive oil is.  I mean, how does something become “extra” virgin?  Virginity is like pregnancy, in that there are no degrees.  You either are or you aren’t.  The only explanation for Extra Virgin Olive Oil I can thing of is this one: 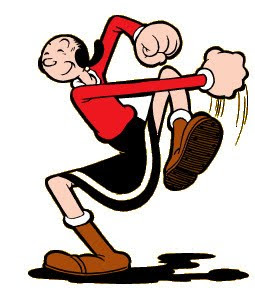 "Well blow me down!"

*  I loved the beds at the Hilton… with the pillow-top mattress and all the pillows; it was like sleeping on a cloud.  The TV was also in HD too… I haven’t seen that before in a hotel.

*  Check out the boat that was docked outside the Hilton, The Mirage, from Pittsburgh PA. 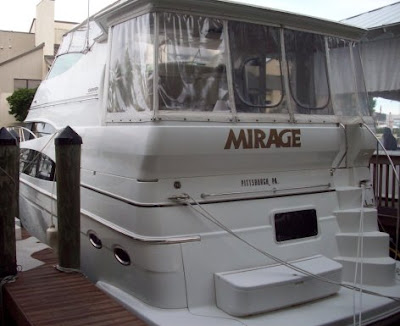 It’s kind of chunky looking… like the nautical equivalent of one of those battery-powered mini-cars.  What I really want to know is how does one get a boat from Pittsburgh to the east coast of Florida?  Without going through all those "Deliverance" rivers…  My guess… a big trailer.

I just decided that I should make this a 2-part story… not only am I running long before I even get to the game, I’m feeling less and less like working right now.  I have to go back to work tomorrow with no more lazy days off in sight.  So! 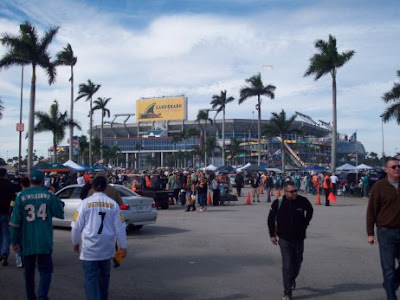 Great shots of the hotel, etc. Looks like a good time.

Those warm weather fans don't really know what it's like to root for a team. The whole tropical climate makes them complacent.

Something about cold weather equates to seriously, loyal, insane fans.

Wait til I get into all the game stuff. It's just so... so... Jimmy Buffett! Football isn't a beach luau! It's grilling burgers in freezing rain, or shivering in 10 degree temps with a minus 5 wind chill.

THERE'S NO SUNSHINE IN FOOTBALL!!! FOOTBALL is sleet and mud and slush and wind and snow and ice. There's no almost naked cheerleaders in FOOTBALL. Girls wear waders and mufflers and big thick mittens and big wooly hats so you can't even see their faces.
Right you are, Bluz. Sleek, heartless, soul-less and shallow. La-La Foo-Bah.
FINZUP.

Whoa, where's the love? The Sunshine State shows you a good time and then you don't respect it in the morning?

If you didn't like the fire on the water trick, come back in the spring fire season when we have REAL fires that shut down the interstates in all directions.

And, don't knock the European tourists--they're the only thing keeping this state afloat right now.

So what if everybody IS from somewhere else? We only keep the rude, arrogant ones and the criminals and send the rest back from whence they came. Next time you come, we'll be mean to you, rob you, then kill you and see if that makes you any happier....

And, don't gimme that "when I was your age, we used to go to games in 2' of snow, sit on seats carved into the ice, with wind chills below zero, hot coffee had to be served on popsicle sticks and it was so cold that opposing players would shatter when Jack Lambert would hit them" crap.

Go pick on Kansas City or Oakland or even Cleveland; Miami did their part to get the Stillers into the playoffs....

Aww, I LOVE Florida, Dick! But you gotta admit... Miami is a little, uh, "different."

And I already pick on Cleveland, I'm afraid of Oakland, and Kansas City is just too nice to pick on. Plus they have all that barbecue!