I’m always getting accused of being too regimented and rigid, be it at work or home.
I always deny that, of course.  I prefer to think of it as seeking the best solutions and methods and then using them.  Why be “flexible” when you’re already doing things right?
To me it’s simply a quest for efficiency.  If, through trial and error, I find the shortest route somewhere, or the perfect time and temperature to cook pork chops, why do it some other way?  I believe here is value in saving time and effort, even if it’s only to blow it on blogging.
Making Tracks
I take the subway to work downtown every day.  And when you do something like that every day for almost 12 years, you learn things.
I know to select the set of doors that will leave me at the foot of the stairs at the station at which I arrive and where to stand so that the doors open right in front of me.  I also know that when I’m going to work, to sit so that I’m traveling backwards.  That way, the sun comes in the window over my shoulder and lights my newspaper.  If I sat the other way, it would be shining directly through it, making it hard to read.
So is it really “rigid” if I stand in the same place every morning and try to sit in the same seat?  Or am I just reaping the benefit of experience?
I also have 2 options for walking from the subway to my building.  One involves going through an adjacent building versus just walking around the corner.  Obviously one way is better if it’s raining, but otherwise?
Once a buddy of mine that also rode the subway was talking with another guy when he nabbed me walking by his cube and asked, “Hey bluz, which way is shorter, going through the building or walking around the corner?”
I immediately replied, “It’s 5 steps shorter to go around the corner.”
He busted out laughing, turning to another guy and saying, “I told you he’d know…”
What?  Of course I checked.  It’s the simple scientific method.  Experiment and measure.  Who wouldn’t check it out?
OK, not many, from what I hear.
When lunch comes around, I always leave between 11:45 and noon.  Why?  Because everyone else leaves right at noon.  If I’m not at my chosen lunch establishment before then, I can look forward to wasting 10 to 15 minutes in line, rather than 5.  Lord knows I need those extra minutes for the Friday crossword puzzles.
Sock it To Me
When I was young and newly on my own, sorting socks from the dryer became the bane of my existence.  I had about a dozen pairs of dress socks I had to wear for work; all were black, brown or dark blue.  Matching them all up under the dim light of my bedroom became a problem.  God forbid I show up at work with mismatched socks!  So I’d be in there examining the ankle patterns on the top of the sock and the thinness of the soles, trying to get them all mated.
One night I had an epiphany and shortly thereafter, brought home a box of safety pins.  I then pinned every damned sock to its mate.  Problem solved.  They never again had to be matched or even folded.  I could just scoop them all up and stuff them in the drawer.  In the morning, I could grab one and pull… the mate would follow. 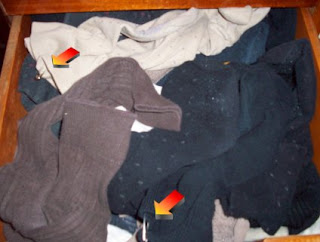 This idea alone is worth the price of admission!
Then in a real stroke of brilliance, I realized that when I got dressed, I could then use the safety pin to attach the tail of my tie to the back of the front part, so that it didn’t separate during the day.  (I’m 6’3”; so I have to tie my tie long, which leaves the tail short of the little loop it’s supposed to go through.) 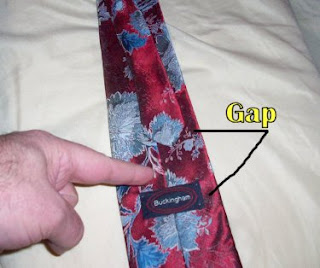 Do you think the time saved here doesn’t add up?  Consider this:
It took me probably 5 minutes of sock sorting per laundry load.  I do laundry roughly every 2 weeks.
5 minutes x 24 laundry weeks in a year = 120 minutes/year saved.
I started this drill around 1986,  24 years ago.
120 minutes x 24 years = 2880 minutes.
2880 minutes /60 minutes = 48 hours.
That’s 2 full days of non-stop sock sorting that I didn’t have to do.  Woooooooo!
Audacity of Change
Another organizer/time saver is that when I empty my pockets of change, rather than tossing them in a jar or something, I stack’em up.  I learned, during my career as a retailer, that the easiest way to count a drawer full of change is to count in small increments and stack them up.  Then you really only have to count the first stack and just line up the rest to match.
In daily life, you don’t usually bring home great gobs of change, so it takes about 5 seconds to add my coins to the stacks.  When the stack reaches rolling level, or rather, when I have enough stacked to roll nickels, dimes and quarters, I do it.  Takes all of 5 minutes and there was no sorting or counting needed. 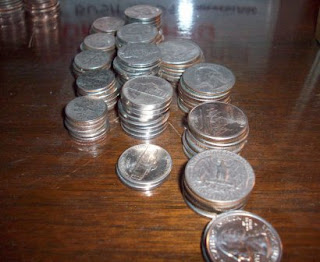 What to do with your rolled coins?  Can’t help you there.
But I can tell you that movie theaters don’t like it when you use 3 rolls of nickels to pay for a matinee.
Now We’re Cooking
Brotha’s gotta eat… I’ve been doing my own cooking for almost all my adult life.  Again, through trial and error, I have a very good idea of how long to cook things like chops, chicken, steaks and fish, and what temperature to use so that they come out tender and juicy every time.  So why wouldn’t I use the same temp each time set the timer?
Pinky is not so encumbered.  She cooks things at whatever temperature she feels like and takes it out of the oven when she wants to eat.  I’m amazed that it almost always comes out good.  (Although I did have to strongly suggest some times and temps, to avoid the dreaded dry meat.)
I did learn something in the kitchen from her though…  I learned to keep my big yap shut when someone else is making my dinner.
After all, I’m not that regimented.
Posted by bluzdude at 9:21 PM

Very funny post, bluz! I think we all have our quirks. Like when we are sitting in the living room watching TV or reading, I may notice that a picture is slightly off level and I am compelled to set it straight. Once Rich hung a decorative mirror up for me. I said, Wow, that looks great, but it's not level. Yes it is. No, it isn't. Yes, it really is. No, really, it's not level. Get the level and see. So he did and it was off level. He has never doubted me since!

You missed your calling, efficiency expert. You have probably added at least five years to your life. Now, how will you use all this wonderful extra time?
Remeber Gordon Pitz who eats the same thing for lunch everyday because he made that decision years ago and doesn't want to waste time making another.
Your food decisions are a little more flexible and time consuming, I'm sure.

Bluz, I fear that someday in the future I'll be reading about a seemingly normal guy who got off the subway in downtown Baltimore and yanked out an AK-47 and started blasting away. And when they ask you why, you'll point to your raw ankles and blame your madness on all those years of chafing by those damn safety pins you forgot to remove from your socks....

This is fantastic! Figuring out how to make life easier is so definitely worth the effort. Interesting post.

I busted out laughing at your sock-sortage calculations...not that it's going to stop me from grabbing a jumbo pack of safety pins. Have you ever had them rust? That's what I would worry about.

Cher:
I would never doubt anything you had to say!

Your "quirk" reminds me of a friend at work... she has to have everything perfectly straight too, which unfortunately makes her a juicy target for workplace shenanigans. Sometimes after work, a buddy and I used to go into her cube and tilt all her stuff juuuuuuust a smidge. She also would keep her push-pins all lined up on her cube wall, and sorted by color. So of course we'd rearrange them.

Mary Ann:
All the extra time goes into writing this blog. And scratching stuff.

I use Gordon’s lunch strategy in dressing myself every day. I have a “pants rotation”, therefore eliminating all the waffling over what to wear that day. I take out my Monday Black Pants and find a suitable (and variable) shirt to go with it. It gets me in the shower that much faster.

Food decisions are easy… I have whatever Pinky decides to make. What could be easier?

Eating out is another opportunity… I have a favorite for Italian restaurants, as you know… Chicken Parm. It’s perfect because it’s usually mid-priced and I get both meat and pasta. I could try other things, I know, but why order something that I know I won’t like as much as the Chicken Parm? Then the sooner I get my order in, the sooner I’m eating!

Dick:
That would certainly explain the mysterious shortening of my stride…

But if I was ever going to go postal, it wouldn’t be at work; it would be in the subway station, clearing a path on the escalator when the left side “passing lane” blocked by people standing there enjoying the ride, completely oblivious to the line of people jammed up behind them.

Or it would be on a subway car when some idiot has all their crap taking up the seat beside them when others are standing.

After all, I’m not an unreasonable person…

The heck with Martha Stewart and her "Gracious Living". I'll be the poster boy for "Efficient Living!"

Katie:
No, after 24 years of this practice, there has never been one speck of rust. Not even a little bit.

Worst case is a little bit of a hole can form at the top edge of the sock, but unless you’re wearing shorts with the socks (eww), it’s completely unnoticeable.

I came up with the sock calculation a few year ago and I was explaining my system to my boss who was totally cracking up, and probably was wondering what she’d gotten herself into with me… But you know, it always helps your case to provide data.

Hell, I should have produced an Excel Bar-Graph Chart!