Auf Wiedersehen to the Scorpions

I read this morning that the hard rock band The Scorpions has announced their retirement.  I’m kind of bummed about that, because it’s just one more of the touchstone bands from my youth calling it quits.  I shouldn’t have to worry about it any time soon, though.  They’re retiring AFTER they release one more album and AFTER they go on a 3-year world tour.

Some people really know how to say goodbye.

What I always loved about the Scorpions was that not only were there lots of loud guitars, they had hooks.  Every song came with a hook in the chorus that was a mile wide.  And they also could do a wicked ballad.  In fact, I think they practically invented the power ballad with “Still Loving You.”

In 2000 they cut an absolute powerhouse of an album with the Berlin Symphony Orchestra.  If ever there was a group to marry metal hooks with classical thunder, these were the guys.  In fact, those of you that watch Pittsburgh Penguins hockey have probably heard some of it.  The Pens sometimes use the symphonic version of “Rock You Like a Hurricane” for when they come out of intermission.  Check it out here:

(Seriously, just press play. I get such a kick out of seeing these old white-haired dudes, bald dudes and assorted hot chicks sawing their violins like Charlie Daniels in that Geico commercial, with all those power chords surrounding them)

I’ll always have a soft spot for the Scorps because they were the first group I ever got to meet using a backstage pass.  I got the tickets and backstage passes through my job at the Peaches record store in Toledo OH and took my buddy Brill.  There, we met up with Janet, a fellow DJ from the Bowling Green radio station. Since she was also working at the FM rock station in town, we figured we’d stay close to her because she’d know her way around these events.  In truth, none of us knew what the hell we were doing.  We just sort of wandered around, looking for rock stars.  Later, I learned that there were usually scheduled times and places to do the meet and greet with the band. 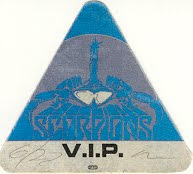 My backstage pass from the night.

Not much happened while we were backstage while the opening act was playing.  It was like, “Where’s the Scorpions? When are they coming?  Hey, is that one?”


No one knew anything.

Then the opening act that had just finished walked through, some group called Bon Jovi.  They were touring on their first album.  I had actually known and liked one of their songs, but we were like, “who’s the guy with the hair?”

When we saw that we weren’t going to going to see the Scorpions any time soon, we went back to our seats to watch the show.  They were touring on Love At First Sting, and their show rocked, highlighted by their one of their guitarists falling off a speaker bank, and getting dragged off the stage by roadies.  OK, I don’t think that it was part of the act, but the rest of the band never missed a beat.  They just demonstrated their German discipline by re-spacing themselves across the stage and continuing to jam.  But I do believe they skipped one of their encore songs, “No One Like You,” (their biggest hit before Hurricane) because of that fall.

Backstage after the show was a much livelier event.  It was like the United Nations of Rock and Roll.  With the Scorpions being German, many of their personnel had German accents.  But we also heard English, Scottish, and various Eastern European accents rattling through the halls.  It made me want to start handing out Halls lozenges, with all the “hcccccch” I was hearing.


After a time, two band members came out to meet a delegation of radio contest winners (and leather-clad groupies).  It was explained that more were scheduled to come out, but it was a “rough show” (what with the plummeting guitarist and all).

Anyway, I had their singer Klaus Meine, and bassist Francis Buchholtz sign my Love at First Sting album.  My pen, (a blue Bic, as I was not yet hip to the Sharpie…if they had even been invented yet) was not writing easily and poor Francis could barely articulate his problem to me.  And his accent was so heavy I could barely understand him. 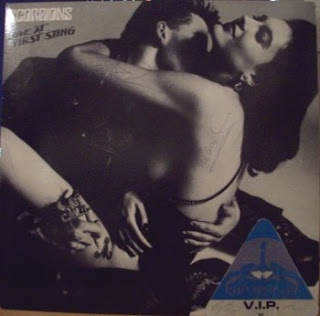 The trophy from my backstage safari.

But the important part was that we went backstage and met some famous people.  Brill summed it all up best, as he surveyed the post-show atmosphere.  He said with some derision, “Look at all these sluts with the spandex and leather and make-up.”

Then he added softly, “I wish I was a rock star.”

i had a 2 page spread pullout poster from a metal magazine on my wall in jr high of klause. probably circus mag but i cant remember. i bought it all the time and then my dad grabbed it one day and saw all the F bombs thru it.....i wasnt allowed to buy it anymore.

I could never get over how short Klaus was... he was like 5'5" or something. Serious pipes, though.

I love classic rock. Right now, it's Boston. All Boston, all the time.

As a pre-Internet, post-pubescent young lad in the late 70s, I only remember the Scorpions for featuring nudity on their album covers. Hey, we were desparate back then.

But I gotta say: It's about time they retire. Haha. :)

Sally:
I don't know how many copies of the "Boston" cassette I wore out. It was a staple in my car forever. It was really a marvel of music engineering... Recorded in 1976, but the sound still "pops", remaining crisp and clear even in this digital age.

Bagger:
Oh yeah, the old album covers were something! I'm sure you remember the import cover of the Lovedrive album... (the one with the gum) The Scorpions and Whitesnake really pushed the limits with their album covers back then.

Stefanie:
I thought the Scorpions were national celebrities in Germany! But you can be forgiven for not knowing that... heck, they reached their peak of popularity in 1984-85. I'm sure you were just a little schnitzel then... if you were even born yet.

(And hey, keep on running! You're doing great!)

Calling someone a little schnitzel is probably the most awesome thing I've heard this week.

Right now I'm having a deep and meaningful relationship with the song Foreplay/Longtime.

Sally:
I just hope Stefanie thinks so too... what if "schnitzel" has some colloquial connotation that I don't know about?

Foreplay/Longtime!! That was my favorite to get in the car and turn up to ear-bleeding levels. Those organ blasts can melt your face!

And I can still air-drum More Than a Feeling, beat for beat. (just in case "Air Band" displaces Wii "Rock Band" as the hip party activity any time soon)

If you can cuten up German cuisine, it's a win. Some of that stuff...jeez.

My grandma was old school German. Raw meat sammiches and such. That woman had an iron gut. If something was past its expiration date, her theory was 'microwave it!'

And air drumming is a much sought after skill. Acoustic drums, if you will.

Snork @ air drums = acoustic. Never thought of it that way.