In November, I wrote about the place I grew up outside Toledo, Ohio and the Barn in which my friends and I hung out.  I also wrote about finding my best friends and a bit about our relationships.

One of my buddies, Mark Brillhart, lived two houses down.  We almost never called him “Mark”; he was always just “Brill.” 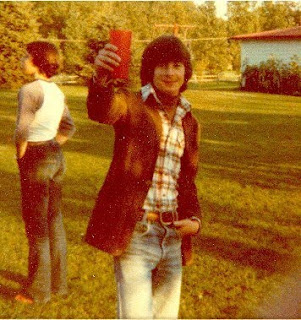 The first thing you noticed about Brill was that he was impossibly skinny. 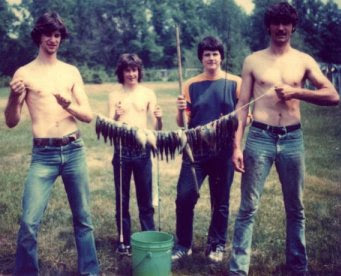 Brill is the 2nd from the left.  We always figured they used him for bait to catch those fish.

We had a friend that used to draw caricatures of us and for Brill, he’d always just do a stick figure. 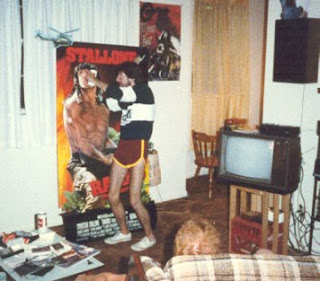 Brill, playing around in one my early apartments.

One of the reasons he was so skinny was that he was born with a congenital heart problem.  In fact, when he was born, the doctors told his mother he’d never make it to age 5.  The fact that he was 16 when I met him tells you that he was tougher than anyone expected.

He didn’t do anything strenuous with us, like play football, but he was always right there.  Sometimes he’d join in and go about half-speed.  We never really acted like anything was unusual about that.  It was just the way it was with Brill.  We all looked after him. 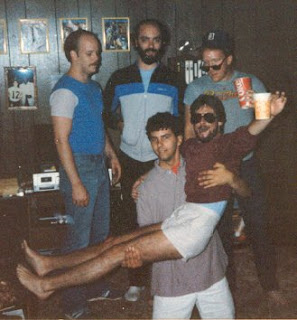 One of the rare times all 5 of us buddies were able to get together after high school.

He had a thing for aircraft… was a total geek for fighter jets.  He had jet models suspended from his bedroom ceiling and could totally tell you what a plane was when one flew over.  (We lived near an Air National Guard base and the Toledo airport.)

Brill was rarely loud or boisterous, but when he was, it was hilarious.  More often, he exhibited a kind of sly wit that would crack you up when you least expect it.  Given his proximity, I probably spent more time with him than my other buddies, especially once we all got out of high school and began walking our own paths.  So many nights we’d get a sixer and just chill in The Barn.  We’d throw some records on and shoot the shit, talking about our hopes for the future, our laments of the past, solving the world’s problems. 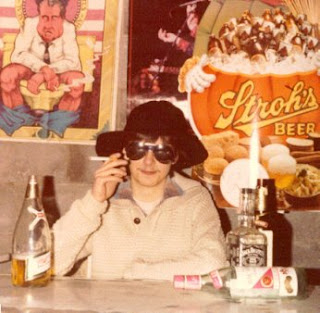 We wrote a chatty little letter to Stevie Nicks one night out there, like we all were old friends… that still makes me laugh.  We never mailed it or anything; in fact I think I still have it in the “archives” here somewhere.  It was just one of those things that didn’t make any sense, but just felt like the right thing to do.

In 1990, I was living in Cleveland and was about to move to Albany NY and a new job.  But the week before that, I had a vacation scheduled to go to Baltimore and visit my folks for a week.  Brill had taken the bus out to meet me in Cleveland, then we drove out to Baltimore for a week.  While out there, we cooked up a plan where he could come back to Cleveland with me, help me pack, then come to Albany with me to help me move and get settled in.  Then I’d get him on a bus back to Toledo.

His help was so invaluable to me.  We drove out in a 22’ Ryder Truck, towing my car behind.  Brill was singularly responsible for saving numerous lives along the way.  If it wasn’t for his desperate screams, I would have ran over numerous families in station wagons, while I was changing lanes.  They owe their very survival to his vigilance.

I had a lot of help getting the truck packed up to go, but it turned out that I had zero help unloading.  So there was the 2 of us, me and spindly little Brill, unloading the entire truck.  I’m amazed that we pulled it off.

He spent about a week with me in Albany, helping me get my feet on the ground, in yet another strange town.  Not just anyone would have done that for a friend, but Brill never thought twice.

Brill got married in 1996 to Joanie.  What a great wedding that was.  We were all so thrilled that he’d finally found someone to love and to love him.  He was so happy! 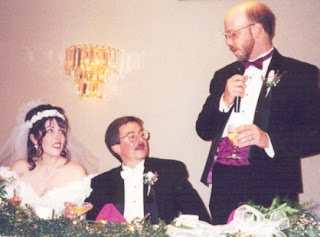 It was hard to keep up with people back then.  We weren’t good at writing letters, nor did we have much extra scratch to pay for a lot of long distance calls.  Things got easier when I got my first computer.

By this time it was 1999 and I was living here in Baltimore.  Being able to email now was helpful, but we still didn’t write much.

By the end of the 90’s, Brill’s health became an issue.  He never talked about it, at least not with me.  But I did see that he quit drinking, completely.  I later learned that he really needed a complete heart and lung transplant.  The rub was that in order for the odds of success to be highest, he’d need one right away, while he was the most fit.  Unfortunately, the donor organs usually go to those that are in the most dire circumstances.  So in order to get the transplant, he’d have to wait until he was sicker… when the odds of success would be lower.

In 2001, I discovered a web service called E-Circles, with which you could sign people up and schedule events, share pictures, and leave comments.  I immediately set up an E-Circle for The Barn and those that called the place a 2nd home.  Brill and I traded a lot of comments on that site.  I could only get back to Toledo once a year, so this made it so much easier to keep in touch.  We made plans to throw a big Barn Reunion for the Fall of 2001.  By then, Brill and Joanie had a young son, Jack.

You’re probably wondering why I’m devoting all this time and space to my old friend.  Here’s why.

One morning, the telephone woke me up at about 5:30 AM.  That’s never a good thing.  Good news waits until you’ve been up a while.  It was my dad.  He told me that Mark went in to the hospital the night before with chest pains, and died early that morning.  My friend, my buddy, just died of heart failure at 39, leaving a wife and son behind.  That was January 8th, 2001, nine years ago tomorrow.

It was a whirlwind after that… my sister and I jumped into the car and drove out for the funeral service a couple days later.  My brother also came later and my folks came down from Green Bay, where they were living then.  I knew I was going to have to say something and had a pretty good idea of what I wanted to say, but wondered how I was ever going to get a word out.

Thankfully, our buddy John had it covered.  All he asked was that Rik and I come up and stand behind him, which we were happy to do.

I look at pictures of us from that weekend and we just look so beat up.  As much as we enjoy being all together, it was just brutal.

I think about Brill all the time… most often when I see a jet fighter fly-by over a stadium.  I know Brill would have known exactly what they were.  I’m glad we had that last cluster of emails and message board comments.  I was sure he knew how much he meant to me, and to all of us.

We had our Barn Reunion that September over Labor Day weekend.  I noticed our laughter was a little louder and our hugs were a little longer.  We had a huge turnout of so many people that had spent time in The Barn… and some of their parents too!  It was an amazing event.  Joanie and Jack came too.  The boy looked so much like his dad.

If you take anything out of this post, I hope it is to make sure your friends know how much you care about them.  If you have old beefs, settle them.  Make sure those you love, know it.  Life as you know it can change in an instant.

Because I know I miss my friend.  And I’d give anything to spend one more night playing records with him and talking quietly long into the night. 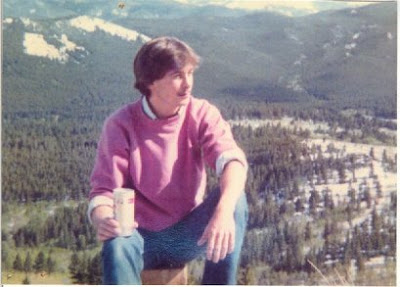 low over this morning

October chill, your only son.

over the full moon’s muted glow.

We go to say goodbye

this early light, our guide

to keeping you real