The Miami Trip - The Sequel Part 2

For today’s game-day mojo, I selected my black Polamalu jersey over a long yellow-sleeved t-shirt, with Steelers socks. 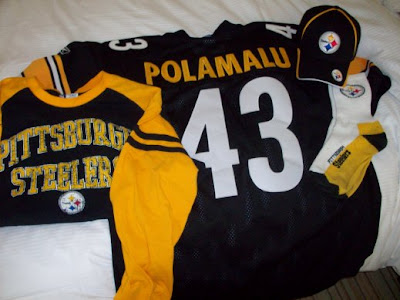 Usually I wear the white Polamalu jersey to away games in order to match the team, but for some reason, I had a feeling I should go with the black.  Then when we got to the game, we learned that the Dolphins were wearing their white jerseys, so that put the Steelers in black.  Boo-yah!

We landed in the outer parking lot at Land Shark Stadium about 11:30, surrounded by many, many of our fellow Steeler fans.  They were everywhere.  I was beginning to wonder if there were going to be any Dolphins fans, beside my brother-in-law Scottie.  But yes, there were Dolphins fans there… they were all parked up close.  All in all, I’d say the Steelers fans made up just under half the crowd.

I know what you’re thinking… “You’ve got a non-Steeler fan in the family?”

Yes, it’s true.  My sister is engaged in a mixed marriage.  She married a Dolphins fan. 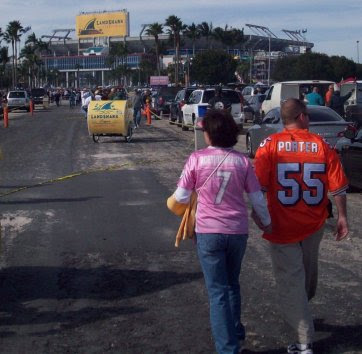 But it’s OK.  We like him anyway and figured we might need a buffer from the resident ‘Phins fans.  Turned out that wasn’t the case.  Just about everyone we encountered was either very nice or just didn’t care.  Can’t ask for more than that when venturing into an “away” stadium.

And quite a colorful stadium it is!  These are the ramps on the way up to the upper deck: 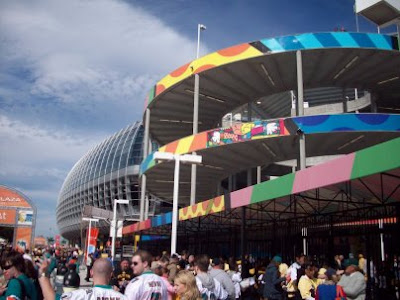 We saw this guy while on the way up: 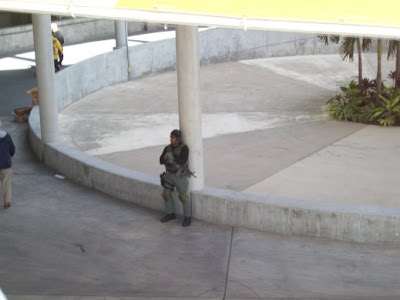 You'd have thought we were in Philly!

When we were deciding on tickets, we opted to go with Club Level seats.  Man, what a good deal, if for nothing but access to the Club Level food service area. 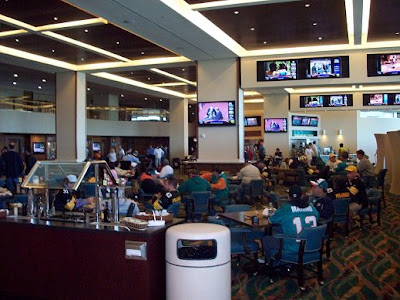 Great food, relaxing setting, lots of TVs.  It also helped that the corridors were relatively clear and made for easy entrance and exit.

Our seats were in the first and second rows of the club level.  Here’s the view: 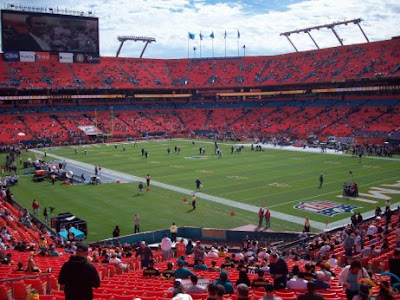 Our view from the corner.

We were thrilled how it turned out.  If you want my advice, when you’re going on a road trip and are paying for airfare and hotels, there’s no sense skimping on the ticket.

I gotta hand it to the Dolphins, they put on an entertaining game experience.  This was from the pre-game introductions. 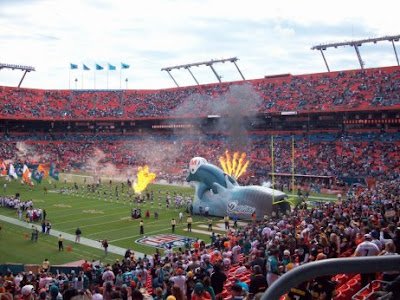 They also had something I’ve never seen before… a bubble machine that would send these sculpted Dolphin logos and stuff into the air.  This pic shows a bubbled “80”, in honor of Don Shula’s 80th birthday. 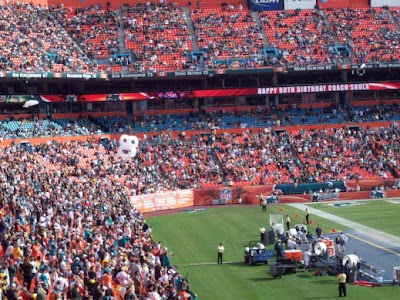 OK, you have to tilt your head to the right, otherwise it looks like a surprised monkey.

The Dolphins’ owners also get into the act.  Besides the usual old rich white guys, the Dolphins also count Gloria Estefan, Jennifer Lopez, Marc Anthony, Jimmy Buffett and Venus & Serena Williams as owners.  Each of them made multiple appearances on the scoreboard, exhorting the fans to go “Fins Up”, which is their rallying cry.  Singer Fergie was also on hand… I don’t know if she’s ownership or just there for the Shula party, but she seemed to be everywhere, introducing the players onto the field, getting interviewed on the TVs, doing the Fins Up thing, and just looking sexy.

The game?  Eh, given how the day turned out, I’m not going to get into much analysis.  I was very proud, though, at the overall volume produced by the Steeler fans, as well as the amount of towel twirling. 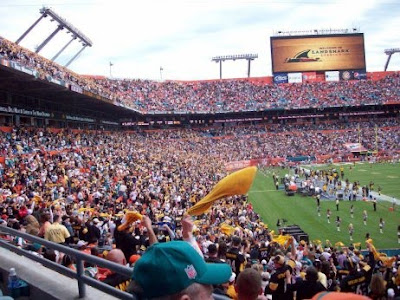 The picture here doesn’t quite do it justice.  You can see the effect a little better on this video I shot of Ben’s TD pass to Heath Miller.  I was recording all the “goal-to-go” downs when the Steelers were in our end.  There are 5 uneventful plays, and this:

I just have to learn to slow down the pan when I scan the crowd.

The game was enjoyable.  Obviously, the Steelers wouldn’t let us just enjoy an inevitable win; they had to go and give up a couple quick scores to a 3rd string QB, but we were happy with the “W”.  And it was nice to see January football without freezing our asses off.  Worst you can say was that in the shade, it was a bit brisk.  When the sun was out, it was quite warm.  Thank you, Miami!

Unfortunately, before we even got out of the stadium, we learned that the Patriots choked and let the Texans win, so that took a little bit of the air out of our sails.  But all in all, we were quite content with the experience… until we got back out to the parking lot and got trapped for about 40 minutes.  There was only 1 exit and not everyone was lining up in an orderly fashion.  Line jumping seemed to be the status quo.  If I didn’t know better, I’d have thought I was back in Maryland.

Once we got out onto the road, we were back at the Hilton in no time.  We were hoping to catch the Penguins/Panthers hockey game but either it wasn’t on or the hotel didn’t carry the channel that aired it.  So we had to be content with watching the Bengals fold under the Jets.  On the bright side, the pizzas we ordered were much better than the ones we got the last time we were in South Florida.

So, no playoffs this year for the Pittsburgh Steelers.  That sucks, but they can’t blame anyone but themselves.  One win over any of those patsies we lost to (Bears, Chiefs, Raiders, Browns) or either game against the over-rated Bengals and they would have been in.  And once you’re in, you have that puncher’s chance that got the Cards in last year, or the Steelers a win in Super Bowl XL.

Or maybe I just take the blame myself, for misreading the mojo tea leaves for some of those games.  I never should have worn the Lambert throwback during the Browns game.  Coach Tomlin was just too polite to mention it at his final press conference.

One final note, just because it cracked me up…

I saw today on my StatCounter page that someone from Maryland found this site when they Googled “Why do people hate the Ravens?”  Boy, did he ever come to the right place!

So glad to be able to provide such invaluable public service!