In a sudden fit of usefulness today, I actually got a couple of things done around the place.

First, let me say that I’ve never been one of those uber-do-it-yourselfers.  I mean, I can usually do what I have to do… I built my entertainment center and various CD/DVD racks and bookcases and stuff… of course they were all “kits”.  In contrast, my buddies are the kind of guys that fix their cars, remodel their houses, build furniture…  I mean, they can build a 6 piece dinette set out of 2 pieces of driftwood, 4 paperclips, a piece of gum and a donut. 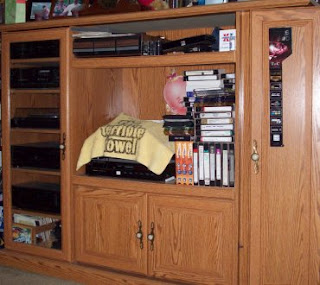 This is my entertainment center.  Yes, I still have VHS tapes.  And cassette tapes.  So sue me.

So I love to regale my friends with tales of “Bluz, The Incompetent Handyman.”  Like when I was trying to put up new mini-blinds in one of my apartments.  The surrounding frame appeared to be a very soft pine, so it shouldn’t have been any problem at all.  But I was using a borrowed power-screwdriver and I just couldn’t get the screws to go in!  I’m pushing and grunting and swearing…

“Goddamn, what is this stuff?  Maple?  Ash?  Concrete?  Why won’t this flippity flappity thing go in?”

It took a full twenty minutes before I realized that the power screwdriver had been set in reverse, to retract screws, rather than put them in.

The blinds went up pretty quickly after that.

I called my buddy to tell him about it later that night and he just roared.  He still tells that story at the bar when I come into town.  I suppose I could have kept quiet about it and saved myself some grief, but what’s the fun in that?

So today’s chores… first I had to fix my TVs.

My little TV in the bedroom his hooked up directly to the cable.  Up until this November, that was fine.  Then Comcast said we had to get these little converter boxes… no charge.  Fine, I ordered 2… one for the bedroom TV and one for the VCR in the main room, which also runs right off the cable.

When the stuff came, I took a look at what I was getting myself into and immediately realized that since this was another device I needed to plug in, I was going to need a power strip.  So I tabled the installation until I got one, the next week.

Now in the 2 months between then and now, the bedroom TV has been losing channels bit by bit.  As of today, it only got 4 channels.  Since this is the TV Pinky uses when I’m watching sports in the main room, the situation was reaching critical mass.

I’d been waiting for the proper circumstances appear… It had to be daylight, because my bedroom lighting is very dim.  Also, it had to be a time when the TVs weren’t in use and weren’t expected to be for a while, because you also have to contact Comcast to activate the units once you’ve hooked them up.  Who knows how long that would take?  Best not to chance missing something.  Lastly, I had to feel like it.

Anyway, it came together pretty well.  I got both units hooked up and then accessed Comcast via their website.  It said it would take about 45 minutes for the change to take effect.  Then about 10 seconds after I clicked the last button, I could hear both TVs spring to life.

Whoo Hoo!   Victory is mine!  This ought to keep Pinky out of my hair when the game’s on!

Next up, I had to hang a painting that my sister had done and given to me in October.  It had been sitting on my dining room floor since then.  It wasn’t because I didn’t like the picture… my sister is a very good watercolorist.  She did a beautiful painting of a bluebird that I just loved.  The problem was where to put it.

My walls are pretty packed.  I hate empty space so my walls are pretty densely decorated.  After 13 years in music retail, I have an unbelievable amount of music swag and keepsakes.  Plus framed photographs I’ve taken, plus assorted Steelers and Penguins stuff.  So to put up something new, something else had to come down.

I don’t know about you, but when I have a tough decision, I can be inhumanly patient before finally making it.  It’s not procrastination; it’s patience!  Patience to the point of inertia, but still…

Anyway, the decision was made and I finally broke out the old hammer and my kitchen is now decorated with this: 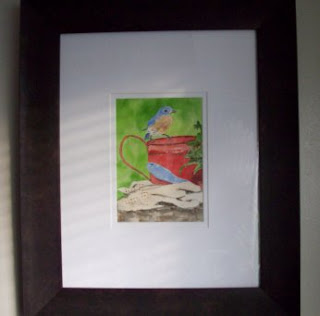 You can stop laughing now.  Obviously, you can see that I do not have children, nor do I own a house.

It leaves me with so much more time to blog!

So now it’s time to claim the reward for all my hard work… The Saints/Card game, the Colts/Rats game and the Pens game late from Vancouver.  Life is good.
Posted by bluzdude at 5:06 PM